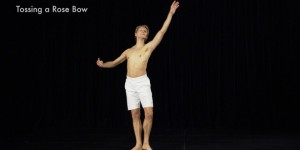 Beach 110th on the beach

In the late-summer dusk, against a backdrop of surf and sky, the NYC Parks Department’s unwieldy orange beach rake slowly traverses Beach 110th. But this isn’t the standard end-of-the-day leveling of the sand. It’s the closing performance of curator Sasha Okshteyn’s Beach Sessions, which poignantly brings together dance, the environment, and various New York City communities.

In 2015, when Sasha Okshteyn first conceived of Beach Sessions, she hoped to bring her background in modern dance to the scenic landscape of Rockaway, a notoriously isolated peninsula in Queens. Okshteyn, then a Rockaway resident, intended to unite disparate audiences: Rockaway residents who normally would have to commute to experience this caliber of contemporary dance and outsiders who previously thought of Rockaway as the end of the earth (or just a fun beach).

After a successful 2015 season funded through Kickstarter, Okshteyn secured backing through the Partnership for Parks Capacity Fund Grant. She also expanded Beach Sessions to include environmental initiatives. Now a beach cleanup follows the event. Participants bring two pieces of trash to Caracas Arepa Bar in exchange for a free drink.

“The idea is that if people see beautiful things on the beach, they will want to maintain the beauty of the beach,” Okshteyn explains.

Okshteyn curates all the shows. Over the years, she has brought in the likes of Netta Yerushalmy, Loni Landon, and renowned street dance artist Reggie Gray.

“I choose artists who are already considering outdoor elements, or who have a desire to engage with their environment,” says Okshteyn.

For the 2017 series, one of those artists is Madeline Hollander. In her Arena, a beach rake carves out a circular performance space for seven dancers. Clad in transparent brown mesh body suits, the cast of seven, which includes Hollander, moves as a machine, flicking their arms and shuffling their feet. They cull the sand and systematically disrupt the perfect pattern left in the rake’s path.

The audience encircles the performance, coming and going as they please — very chill, very Rockaway. Their flow seems as much a part of the performance as the undulating waves or the birds flying overheard. At one point, a woman in a flowing pink dress mimics the gestures of the dancers; sometimes, children run to play in the performance space.

Says Okshteyn of Hollander: “The environment is another dancer in her work.”

Like a tide surging or the day fading, the dancers’ sequence changes slowly. Before we realize it, their gestures have evolved. A wobbly one-legged shuffle turns into an advancing line of lunges and eventually seven variations on one shape. As the movement increases in complexity and formality, moments of unison transform into canons and then duets. The one consistency remains the pathway of the dancers, who relentlessly outline the circle.

It is impossible to pinpoint when it happens, but it becomes unclear who is chasing and who is following. Just as the dancers erase the trail of the beach rake, so does the rake erase their deliberate foot patterns.

Because of the in-the-round orientation, the scale of the piece depends on one’s viewpoint: The seemingly infinite ocean provides a different backdrop than the uniform, boxy condominiums that line Shore Front Parkway.

Arena highlights the transience of existence. Anything created will one day be destroyed; all that we work for will soon be forgotten. The sand mimics this transience. Sculpted out of rock, it appears palpable, yet it slips through our hands like liquid.

When the septet withdraws from the performance space, the dance seems to continue because Arena, like a piece of nature, takes place whether or not we are paying attention.

The Dance Enthusiast Hits The Streets to tell you what is happening in our dance community and to inspire conversation.
For more Dance Enthusiast Day in the Life pieces, which connect audiences to the behind-the-scenes of dance click here.