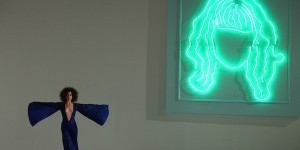 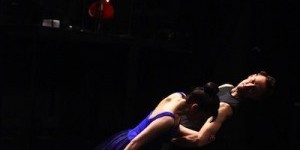 Impressions of: Maria Hassabi's “Premiere” at The Kitchen in conjunction with Performa 13

Choreographer Maria Hassabi contends that a performative artwork does not exist until its premiere.  A first date of sorts between the artists and the audience, a show can only be realized and evaluated at this moment. In Premiere her new piece for The Kitchen in conjunction with Performa 13, Hassabi delves into this correlation between performer and public.

Hassabi challenges this complex relationship immediately. Five performers — three women and two men clad in futuristic denim outfits and slick black shoes — face the entry door to the theater. Both sides of the stage space are covered with glowing lights in a variety of sizes and shapes including globes, grilles, and quadrangles. To reach our seats, we must cross into their space and share their spotlights.

While Hassabi professes an interest in extremely slow movements, it seems her real curiosity lies in stillness and its corresponding impossibility. The quintet holds their opening montage of an artfully arranged line of lounging and standing bodies for multiple minutes. While they appear as mannequins at first, we soon notice subtle motions that mark them as humans: chests rise and fall, eyelids flutter, and weight shifts from one side to the other.

Incrementally, the five come to life. A foot scrapes. An arm slithers. A torso bends.  In Premiere, each dancer performs an individual sequence consisting of articulated pedestrian actions like sitting, standing, and sprawling. Stillness, long moments of it, punctuates each movement. There appears to be no presentational front; dancers confront each facing with unabashed curiosity.

Hassabi demonstrates a deft eye for striking tableaux. A check mark stretches across the floor, dancers’ postures ranging from crouching to erect with Robert Steijn (a shaggy, Jeff Bridges look-alike) the prostate perpendicular stroke.  In one sublime moment, a quartet inches away from their human axis to form the cardinal points of a compass. Between the coolly grungy set and the artists’ unwavering stances, these scenes suggest an inspired fashion shoot. Posing, the activity of assuming a position to impress others, seems examined — and validated — in Hassabi’s choices.

Sound designer Alex Waterman offers only a suggestion of a score. Intermittently, speakers emit faint crackling and rattling. Largely though, the primary sounds are whirs from The Kitchen’s HVAC unit and rasps of the performers’ limbs against the floor.

At over 75-minutes long, Premiere insists you confront your 21st century hyper-stimulation. Although the pace does intensify, stillness becoming less pronounced and actions multiplying, this piece prevails as a study in measured development.  Not much happens, but if you stay alert, your attention sharpens and you savor the subtleties.

In a typical performance, the performers remain unaware of the audience until after the evening’s conclusion. In Premiere, the house lights remain undimmed, allowing the artists to inspect our response. Even the bow, an opportunity for the cast to accept our accolades, comes with a twist. Arranged in a reversed image of the opening tableau, they gaze at us expectantly as we applaud and shuffle out.

A last look at the frozen tableau begs the question: Were we the premiere?