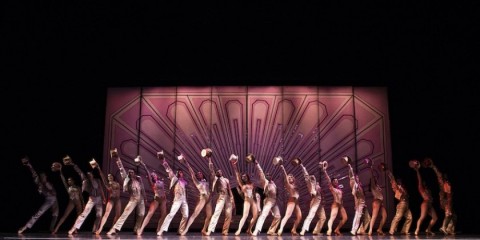 For A Chorus Line’s Paul San Marco, the theater was the one place where his homosexuality wasn’t shunned. For Mark Anthony, it was an outlet for his obsessive curiosity about anatomy and sex. For Sheila Bryant, performing was an escape from her philandering father and a mother who transferred to her daughter unfulfilled dreams of a ballet career.

A Chorus Line premiered on Broadway in 1975 and has enjoyed countless revivals, including this recent run at New York City Center as part of the venue’s annual gala production. But the show’s magic doesn’t lay in the catchy songs or even the slinky, Fosse-inspired dance numbers. The true poignancy is its deep dive into the heart of what drives people to the stage.

The concept is simple — the entire show is set at a New York City studio where 17 dancers audition for eight spots in the chorus of a new Broadway production. The casting director, Zach (Tony Yazbeck), manifests as a God-like, disembodied voice, who emotionlessly demands each dancer step forward and share his or her story.

At first, it seems touching that this powerful person would want to know something personal about those he will ultimately cast as indistinguishable cogs in his Broadway machine. Soon, though, the prying feels manipulative when he asks them to share highly personal information. The dancers struggle with how much they’re willing to share and how to construct an identity that meets his nebulous standards.

The only narrative arc is the plight of Cassie (Robyn Hurder), Zach’s ex-girlfriend. She wants to return to the chorus after a failed attempt at stardom, but Zach isn’t convinced she can blend in. Cassie tells a bit of her story in her show-stopping solo, “The Music and the Mirror,” which consists of dramatic layouts and coy leg extensions.

A line of mirrors flips toward the audience, revealing the repeating reflections of Cassie, a reminder of the many facets to her identity. This complex, segmented identity is echoed in the lighting — a pattern of red, yellow, and blue squares on the ground that resembles a Piet Mondrian painting.

Another standout performance is Tara Kostmayer’s portrayal of the vibrant, hopeful Diana Morales. Kostmayer’s energy captures and enlivens us as she tells her story of attending a prestigious acting high school, only to be discouraged by a narrow-minded teacher.

Little dialogue occurs throughout the show where words, song, and movement interweave naturally.

“Who am I anyway? Am I my resume? What is this picture of a person I don’t know? What does he want from me? What should I try to be?”

These lyrics from the opener, “I Hope I Get It,” expose A Chorus Line to be an investigation into identity. How do we take all our intricacies and quirks and package them for public consumption? At critical points throughout, the black background pivots into a mirror that reflects us, the audience, back at ourselves. This show is about us as much as it is about the characters.

Elements are arguably even more germane today than they were 40-plus years ago. How does a millennial generation of “unique snowflakes” cope with the reality that only a few will achieve stardom? Paul (Eddie Guttierez) describes his struggle after coming out of the closet, with words that resonate strongly:“You know, there are a lot of people in this world who don’t know how to be men. But I am one.”

So what leads someone to chase a life of struggling between gigs, desperately trying to fulfill someone else’s vision, where rejection is the only regularity?

In the last number, the dancers return one by one sporting identical glitter blazers and top hats. In a line, they move across the stage — the mirrors behind them making it seem like they continue into infinity. In spite of the irony of the song they belt in perfect unison, “One,” which describes the merits of one special person, we are struck by the magic of it all. There really is no business like show business.

The Dance Enthusiast Shares IMPRESSIONS/ our brand of review and Creates Conversation.
For more IMPRESSIONS, click here.
Share your #AudienceReview of performances for a chance to win a ONE-YEAR SUBSCRIPTION to Marquee.TV for you and a friend