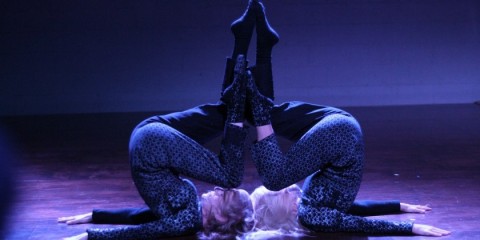 Future Oceans at the JCC

On January 6th, four groups from New Orleans came together for an eclectic evening of performance. They were part of Future Oceans, a new program showcasing artists from London, New York, and New Orleans during this year’s Association of Performing Arts Presenters Conference.

Choreographer Meryl Murman’s mis Place offered an example of art reflecting life. In a bizarre twist of fate, the work, as it was meant to be presented, never quite happened. Dancer Doron Perk, detained in a Tel Aviv airport for over 36 hours, couldn’t perform his solo onstage as planned, accompanied by a real-time video of Israeli percussionist, Roy Ben Yosef. Instead, Perk’s live performance was substituted with rehearsal footage showing him in his New York City apartment as Murman recited an impromptu speech detailing the work.

Funding, homeland security, time, space, and forces of nature, change the course of lives, or in this case, works of art, and mis Place makes manifest the variety of limitations that bind creative people across the world. Murman speaks of desire and restriction as lovers in a continual dance.

As Perk moves via rehearsal video, we feel anxious. Watching his arms just-about-touch the walls on either side of his modest flat, the rectangular room seems oppressive. But, as Perk continues to slide his weight from side to side—agile and calm—the space around him appears less of a cage. We see that he has embraced freedom within the stricture.

Fast moving and darkly funny, Goat in the Road’s Foreign to Myself (excerpts) explores the daily life of a returning Veteran as she struggles to fit back into her world. In several extracted scenes, feelings of alienation and disconnection are highlighted through mundane events: dressing for a wedding, a conversation between siblings, and watering of plants. During the final scene, two violinists perform a haunting, contrapuntal duet as a soldier figure dances gestures of combat and surrender. While each instrument is strong enough to stand on its own, somehow solos would be incomplete. Played together in conversation, the pair are two pieces of a rich tapestry.

Goat Road Productions' Foreign to Myself; Photo by Joshua Brasted.

Belgian born, classically trained cellist, Helen Gillet closes the evening with a set of improvisations springing from her latest album, Helkiase. Using staccato finger plucking over a rolling pre-recorded track, Gillet opens her set with a sound that is flavorful and rich. Middle-Eastern, American folk, and bluegrass make up the palette.

After an intensive study of Hindustani music, Gillet developed an experimental approach to electro-acoustic looping that enables her to synthesize a variety of genres and create distinct musical environments. Composer, conductor, musician and magician, Gillet taps, pedals, and turns knobs as she plays and sings, establishing blissful layers moment by moment.

IMPRESSIONS: Third Rail Projects in "Return the Moon" on Zoom