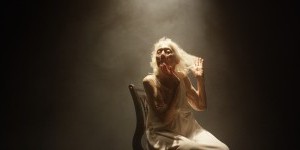 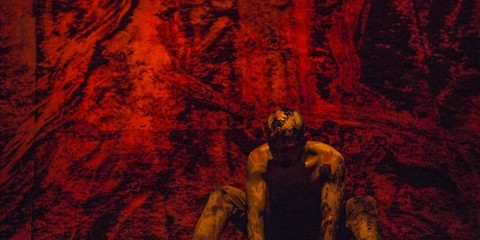 As I enter the auditorium of Lincoln Center’s Rose Theater for XENOS, two musicians play Indian music under strings of makeshift lights. The action is confined to one side of the stage, giving a feeling of intimacy. Am I at an Indian garden party? At least a dozen ropes — some stretched and others partly coiled — drape the stage as well as a vertiginous slope all across the back of the stage and behind the musicians, conjuring an intriguing image of giant snakes at rest.

The house lights eventually dim and a man in simple, traditional Indian garb stumbles in as if pushed. The man, choreographer Akram Khan, turns out to be a Kathak dancer. He stomps rhythmically and folds and unfolds his arms while he spins. However, the mood feels ominous. The lights flicker, but not in the joyous pulsing rhythms typical of Indian restaurants in the East Village; instead an audible fizz accompanies the irregular dimming and distant echoes of sputtering combat gun-fire seem to approach. Khan trips and falls. He unfastens the bells around his ankles and it looks as if he is freeing himself from shackles. The strands of bells resemble chains or serpents.

Soon the ropes begin to move up the slope and the scenery changes dramatically, because some of the cords are attached to chairs, a carpet, and cushions. The ropes pull all of it up the incline as if a hungry giant monster waits crouching behind the artificial hill.

Now the stage space is barren. Like angels hovering above, five musicians occupy a raised enclosure beyond the slope. Khan is alone. He portrays an Indian colonial soldier and recounts and relives his anguish and pain. The program notes tell me that the piece recalls WWI, and the centennial of the Armistice. We witness his suffering soul through his failing injured body. The stage is dark. Too dark. Earth trickles down the hill. There is dirt. Mud. Khan wanders around. I feel trapped. An impressive gramophone funnel with a light inside appears on top of the hill. A voiceover informs us that this is the end of the world; yet the 65-minute work seems endless.

Khan’s long journey strikes me as a hopeless search. In war we are all strangers or foreigners and by the atrocities soldiers commit, they become aliens to themselves. Xenos. The stranger, the enemy, the other.

The work ends with thousands of pine cones rolling down the hill. Are they a metaphor for grenades and mines? Or do the pine cones hold the seeds to new life?

Khan sits still near the top of the forbidding incline.

The Dance Enthusiast Shares IMPRESSIONS/ our brand of review and Creates Conversation.
For more IMPRESSIONS, click here.
Share your #AudienceReview of performances for a chance to win a prize