Published on December 3, 2019
Sasha Rydlizky in "Messages in Time"; Photo: Paul B. Goode

Featuring a World Premiere, "Messages In Time," Conceived and Created by Alison Cook-Beatty and Shem Guibbory

Concept and Creation of Messages in Time: Alison Cook-Beatty and Shem Guibbory

Alison Cook-Beatty dreams up worlds that dance. Stories fascinate her, as does collaboration. In her ambitious two-weekend, self-presented “Artists in Motion,” she brings together almost 90 people to showcase work. Says the artist humbly in her program notes, “Artists, dancers, choreographers, musicians, and composers need to create…working together within our communities makes both the [Alison Cook Beatty Dance] Company and the world stronger.”

Such generosity of vision enriches our artistic sphere. Brava.

Collage of Guest Performers: (L) Liz Sexe in Marlene Skog's, Her Eyes Are Open, Ay, But Their Sense is Shut (Macbeth)  and (R) Junichi Fukuda in his Dismell,
a duet with Jason Jordan, Photos by Paul B. Goode

In Cook-Beatty’s evocative presentations, sculptural maneuvers bring dancers easily down to and up from the floor. Impeccable partnering, elaborate traveling patterns, athletic phrases, and natural transitions reveal a gifted artisan’s craft. But, for all the intricate choreography and standout performances of dance and music, I felt somewhat lost in Beatty’s first two works.

During  Seele (2019), Vera Paganin and Sasha Rydlizky tear at the space with Richard Sayama. Yet, as the three are driven into urgent configurations, I am disconnected from the drama. Obviously trouble’s afoot, but I need some breadcrumbs to be dropped so I can follow. Who are these people, and what are they trying to say? 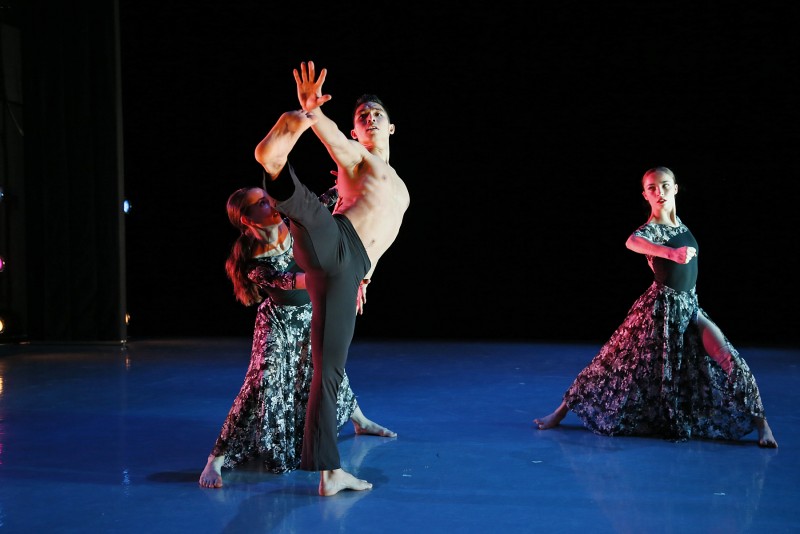 In Banshee’s Lamentation (2013), Timothy Ward sweeps across the stage dazzling us with arabesque turns and whirls. He’s a banshee about to carry the expiring Rydlizky to another world, away from her sisters, Carolina Rivera, Fiona Oba, and Paganin. The sisters’ angsty performances are worthy of any wronged Wili or aggrieved Graham acolyte. Graham technique, in fact, peppers their movement. Sorceress-like arms, extended in an austere V-shape, reference Myrtha, Giselle’s Queen of the Wilis. But how I wish the sisters would change their expressions every so often. Rydlizky, an artist of tremendous facility, looks lethargic. She’s dying; I get it.  Still, I long to see variations in her experience as she moves, a transformation.  By the way, I wouldn’t have minded being taken to Banshee-land by Ward. It looks like wherever he travels would be fascinating.

It strikes me that storytelling through the abstract art of dance can be, please, excuse my symbols — a b*#ch. It’s a sensitive and sophisticated business, with a fine line existing between being too cryptic or too obvious. No matter the amount of talent on or behind the stage, the stars, planets, and all the collaborators must align for the mission to be accomplished. A clear arc of action and defined characters help.

In Cook-Beatty’s world premiere, Messages in Time, a dancing tale created with violinist Shem Guibbory and dramaturg Anne Catherine de Mare, the stars, etc. do align. The quintet is breathtaking — the company’s tour-de-force.

Beginning amoeba-like on the floor, the dancers gently roll over each other as a piano marks time and a violin begins to sing. Before we know it, Rydlizky is lifted up horizontally by the bundle below. With a somersault and tug, she moves the group forward and to their feet so the story can begin. 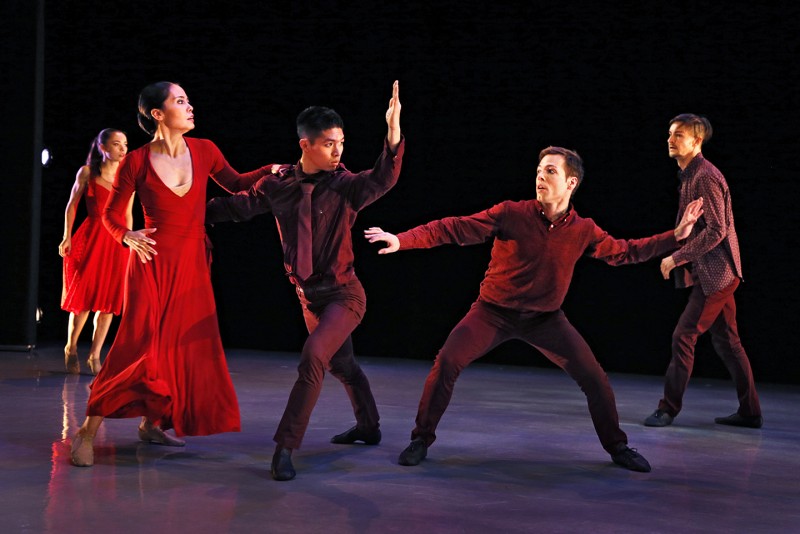 As the dancers easily run, spin, and twist in a rotating circle, characters emerge. Soon, Sayama’s thrust chest and pronounced walk distinguish him as an authoritarian. Niccoló Orsolani, a gleeful springing meteor with an open face, objects when Sayama approaches his mother, Rivera, to dance. The mother clutches her head and gut with worry for her young son. She knows there are repercussions for getting in a tyrant’s way. Timothy Ward, young Rydlizky’s lover, soon finds this out. He embarrasses the despot in an altercation — his punishment, to be sent away to a work camp. There — in a powerful falling, reeling dance, arms held behind his back as if he’s being tortured — Ward dies. Luminous Rydlizky, who clung to Ward with passionate exuberance before he left, remains alone with his child. The ballet ends with Orsolani and Rivera, mother and son, rushing to Rydlizky to help care for her baby as Ward’s gentle spirit watches over them. A conflicted Sayama looms in the background.

Timothy Ward (hovering over) From L to R: Niccoló Orsolani,  Sasha Rydlizky,  and Carolina Rivera in Messages In Time; Photo by Paul B. Goode

Written, this tale seems simple. Filled out as it was by the artistry of all involved, it encompasses a small, exquisite universe. Cook-Beatty’s bountiful choreographic gifts shine. The dancers  live and breathe their characters,  carrying us closer to the heart of the story with every gesture and glance. Our curiosity is aroused, opening us up to feel and follow along. And the music! The sensitivity and fervor emanating from  Susan Sobolewski's piano and Guibbory’s violin felt almost tangible. Hard to believe we were listening to a recording rather than live musicians playing in response to the dancers.