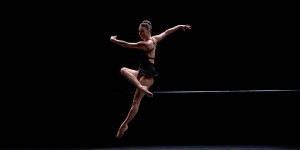 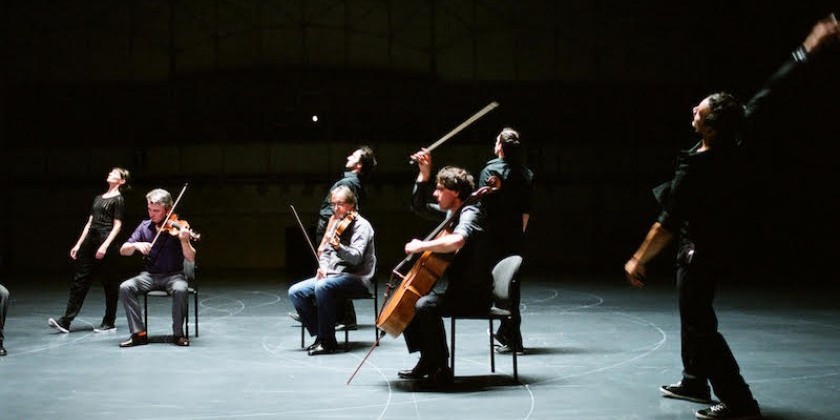 Art events have a magical way of assembling and condensing even the most vast city. In Los Angeles this past month, Yuval Sharon fought diffusion with diffusion, creating an experimental “mobile opera” for 24 cars that threaded the city together on weekends — a mirage-like sung story of biography that arose from cars, buildings, and outdoor spaces.
During the week of Nov. 13, when news of the Paris massacres broke, it was the static and historic arts centers that both fixed the moment in time and provided an imaginative refuge beyond it. In a week of myriad arts performances, two events — a conversation between choreographer William Forsythe and philosopher Alva Noë at the Getty Center on Thursday, and concerts by Anne Teresa de Keersmaeker/Rosas at UCLA’s Royce Hall on Friday and Saturday — bracketed the dire news with consoling portraits of our mortal tenderness and vastness.

On the evening of Nov. 12, hours before the Paris news would break, the panoramic Getty Center hilltop was still bathed in reflective light moments before Noë and Forsythe took the stage together inside the Williams Auditorium. And though the speakers remained rather sedentary on the auditorium stage, philosopher Noë’s opening remarks plunged cleanly and sharply, not unlike a Forsythe move, into the meat of his latest book "Strange Tools," an investigation into art and human nature.
“What is art?” he asked. “Why does it matter so much to us? And what does the fact that it matters so much tell us about ourselves?” A philosophy professor at UC Berkeley, Noë explained that he served as “philosopher-in-residence” with the Forsythe Company in Frankfurt during his book-writing process, using the choreographic form as a central tenet into his investigation into art-meaning and-making. “I certainly could not have written this book [without Forsythe],” he said.
The former director of Ballet Frankfurt, Forsythe is just starting his first year back in the U.S. as Artistic Advisor at the new USC Glorya Kaufman School of Dance. The revered choreographer sat in a relaxed, attentive repose while Noë led the audience of dancers and academics on a journey to visualize the act of creating art as not unlike a philosophical practice.
Alva Noë; Photo by Serena Campanini
As Noë writes in Strange Tools, “This is because both art, and philosophy — superficially so different — are really species of a common genus whose preoccupation is with the ways we are organized and with the possibility of reorganizing ourselves.”
A choreographer is representing dancing, he explained to the crowd. Just as philosophy does not equal words, so choreography does not equal dance. Noë threw out phrases to try to define choreography’s form and intention beyond the word’s appropriated meaning as “an achievement in organization.” He suggested a term that “helps collapse a relationship between forces and things”....”suggests a sophisticated relation to its parts...spatial and temporal….rhythmic components”...."a smooth machine.”
Forsythe chimed in: “a concert or cascade of events,” then added that, of course, he was always looking for ways to disrupt or derange that impulse along its journey.
Boredom and absorption have a very close relationship in art, Noë also said. The extent to which artistic absorption can alter time recaptures that unique, metronomic quality of childhood boredom. “The proximity of boredom to the work of art is somehow a clue to what art is and does,” he said. In Strange Tools he writes, “It is our nature to be absorbed into organized activities, and dancing is an organized activity; it is one of the activities that absorb us. Choreography is a practice for investigating our absorption.”

William Forsythe; Photo by Stephan Floss
Since perception itself is “an act that we perform or achieve” (and not — for Noë — convincingly proven to reside in the brain by neuroscience) our responses to art will be highly individual, and we won’t all immediately find meaning in the art we see.  It can take a long time, and multiple viewings, or maybe never be revealed. Thus the pleasure, said Noë, of having “those people” who pass beside you in a gallery and unearth unseen meaning for you in a work of art.
“Where are those people, those people who explain the art?” said Forsythe laughingly, a few moments later, when he took the conversational lead. Whether he is choreographing dance or creating his large-scale art installations, which he calls “choreographic objects,” “You assume those people have been detained,” he said. He takes Richard Serra’s position regarding audiences: “You assume spectators are more intelligent than you expect...and also that they’ll have no clue.” The lifelong paradox, Noë called it: that works that are “made to be received” are also “always veiled in obscurity.”
During the audience Q&A, a man asked Forsythe: “Can choreography be taught?” Forsythe said, “No...You can’t make people choreographers.” Working with students, he focuses instead on teaching motion analysis. “We discuss what things are made of,” he said. He also urges students not to adopt a posture when they are working. “Nothing about my life changes when I enter the studio,” he said. He wants the same for students, posing: “Could you be enough the way you are? Could that suffice for art-making?” Heading down the steep hillside from the Getty after the talk, suffused with inspiration and questions, I watched dully as stars and city lights crisscrossed the darkness.

Within 24 hours, news of the coordinated Paris attacks had arrived, and Sunset Boulevard had a semi-shuttered feel as I drove to UCLA to see the U.S. premiere of Anne Teresa de Keersmaeker’s Verklärte Nacht (2014) at Royce Hall. It was the third performance in "Then & Now,” a week-long showcase of works by the Flemish choreographer and her company Rosas, yet rather than having a sense of accruance, the energy in David Allison’s large high-vaulted hall — modeled after Milan’s Basilica di Sant’Ambrogio — felt mute and arrested. The stage had been entirely emptied out, just bare concrete walls and lighting.  As well, there’d been an advance decision to sell only every other seat, employed a couple of times during the festival to improve sightlines for the more intimate dances, and now the checkerboard of empty seats assumed an eerie symbolism.
The energy shifted when Kristi Edmunds, Executive and Artistic Director of the Center for the Art of Performance (CAP-UCLA), stepped out to welcome us.  Speaking about the importance of being together in “this communal place,” she admitted that it had been a hard day for the Brussels-based company, that everyone was “jangled” (three of the younger Rosas dancers are French). But “you are here and we are here and we carry forth,” Edmunds said, echoing Beckett (“I can’t go on, I will go on”). And on that night, she called our attention to the place where we sat: “a beautiful hall named for a philosopher” [Josiah Royce].
Anne Teresa de Keersmaeker’s Verklärte Nacht; Dancers: Samantha van Wissen and Bostjan Antoncic; Photo by Anne Van Aerschot
Set to Schöenberg’s Verklärte Nacht (Transfigured Night), inspired by Richard Dehmel’s poem about a woman telling her lover that she is pregnant by another man, de Keersmaeker’s piece was originally set on a group of dancers in 1995 and only premiered as a duet last year in Europe. Stripped to its dramatic and physical essence, while the music still retained its full symphonic swells and snarls, the duet didn’t parade any stark moments of confession or revelation; rather it seemed the duo’s braid of old and new feelings emerged thickly knotted from the start, ie there had always been micro-mistakes and regrets passing between them. The performances by Samantha van Wissen and Bostjan Antoncic were radiant, particularly an unforgettable repeated image of van Wissen launching herself upwards into a clinging full-body embrace around Antoncic’s neck and head. Yet the intimate, 30-minute program felt unfairly pitted against the enormity of the day’s events; in the end, having nothing in that vast hall but dreamy Schöenberg and a single sheared couple couldn’t stave off the darkened night.
The festival resolved gloriously the following night with the U.S. premiere of Vortex Temporum (2013), featuring seven Rosas dancers alongside six musicians from the Ictus contemporary music ensemble (building-mates of Rosas in Brussels). An epic group work structured around Gérard Grisey’s 1996 hour-long score of the same name, Vortex Temporum (2013) is a musical and physical tour de force in which de Keersmaeker takes the concept of absorption to its highest form, with musicians and then dancers both executing a dazzling spectralist polyphonic score without cues. Built from sweeping pedestrian runs chained to delicate lyrical phrases, the movement was made ravishing and ever-new by sublime Rosas dancers Cynthia Loemij, Marie Goudot, Carlos Garbin, Bostjan Antoncic, Igor Shysko, and Julien Monty, all as handsome and unadorned as their concrete surrounds. As well, the mesmerizing performers from Ictus -- piano (Jean-Luc Plouvier), flute (Chryssi Dimitrou), clarinet (Dirk Descheemaeker), violin (Igor Semenoff), viola (Jeroen Robbrecht) and cello (Geert De Bièvre) — held the same seamless tandem energy when they too traversed the stage in movement patterns.
“I feel like I just saw the cosmos being born,” my friend whispered during the standing ovation. The audience — staving off the ending of this remarkable night -- lingered long afterwords in the Royce lobby in animated huddles, suddenly having so much to discuss and so much to praise.
Notes:

Forsythe’s first solo museum exhibit is currently installed at the Museum für Moderne Kunst (MMK) in Frankfurt, featuring 12 large-scale conceptual works alongside other MMK museum pieces Forsythe curated. “The Fact of Matter” runs through Jan. 31.
De Keersmaeker/Rosas had to cancel their Brussels concerts this week due to terrorist threats. The company has plans to bring Vortex Temporum to the Museum of Modern Art in New York City in 2016, where it will be performed in gallery spaces.