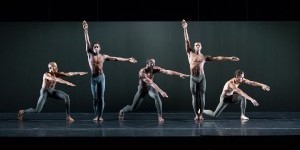 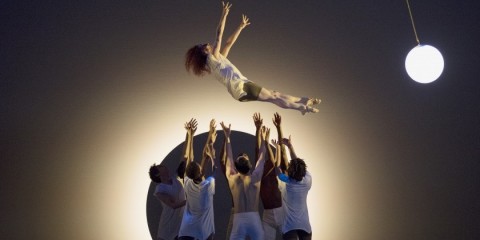 How marvelous to witness Jessica Lang, a female American choreographer, bring the Alvin Ailey American Dance Theater audience to their feet with her collaborative work EN. EN marks Lang’s 100th company commission and her Ailey choreographic debut. A disc set upstage center eclipses an intense light that turns from white to yellow to blue, back to white, as conceived by the much-sought-after designer Nicole Pearce. A moon descends to where the dancers can toss it like a toy, only to fly up. Circles, centers, and cycles figure in this galvanizing work set to a score by Jakub Ciupinski, a brilliant Polish composer living in New York City. EN, with its muscular spirituality, is perfect for Ailey, a thoroughly engaging work for thirteen, including Matthew Rushing, excepting a lull midway. The wild redhead, Megan Jakel, grabbed our focus with the intensity of her every move.

The program opened with Becoming Ailey, a video created in collaboration with Bob Bonniol and Caryl Glabb of MODE Studios, Inc. The prominence of Ailey’s recorded voice is what most commends this video. Also featured were The Call, by Ronald K. Brown, his seventh work for Ailey, and the company premiere of Wayne McGregor’s Kairos, which premiered in 2014 on the Ballett Zurich.

Compared with McGregor’s startling, thrilling Chroma, which Ailey began performing in 2013, his Kairos is disappointing, a dance full of scenic busyness, grand battements, and high chest undulations. Sporadic strobes reduce ten dancers to abstract bursts of light in the beginning. They are barely visible behind a scrim textured by a projection of sheet music that gradually becomes legible. While showcasing the virtuosity of the dancers well, this piece seems perfunctory.

As so often seems to be the case, the Ailey dancers exude a sensual ease and freedom when they perform Brown's choreography. With his grounded style, soft shoulder rolls, and surprising pauses, The Call is a low key, loving tribute to an artist who changed the landscape of American dance. The duet midway set to American composer/pianist Mary Lou Williams makes you smile in recognition of the period when Alvin Ailey himself performed swinging duets with Carmen de Lavallade.