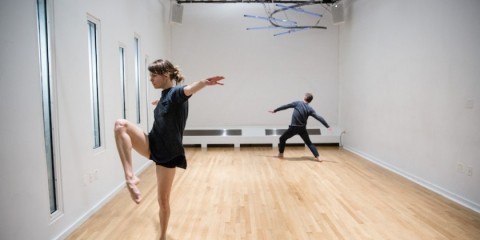 For many, January is a month of self-reckoning and self-contemplation, a time to reset after the sweetmeats and sugarplums of the holiday season. Not so in the dance world. January equals opportunity. Presenters from around the globe tramp through New York’s slush and snow in search of work they want to book. For dancers and dance-makers, these see-and-be-seen weeks can be a game changer.

American Realness, a festival devoted to the artistic value of the other, joined the fun eight years ago. Founded, directed, and curated by Thomas Benjamin Snapp Pryor, it embraces the subversive and the political. This year's iteration featured fifty-three performances of sixteen productions over eight days at multiple venues. Choosing whom to see is an exercise in #FOMO. 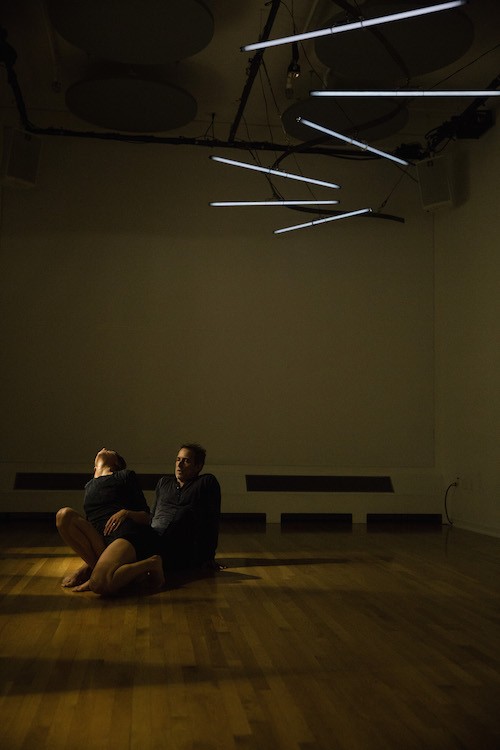 Kimberly Bartosik/daela’s twenty-three-minute Étroits sont les Vaisseaux (Narrow are the Vessels) uses Anselm Kiefer’s sculpture of the same name as its muse.  While her inspiration is a rough-hewn composition of concrete and rebar that evokes frozen waves, Bartosik works with more organic substances: flesh, bone, and breath. The piece, beginning in media res, suggests H2O’s endless cycle of gas, liquid, solid. Dancers Joanna Kotze and Lance Gries accumulate and amplify actions — a canter with arms spread in a low V billows into a suspension with a lifted leg.

The movement may be straightforward, even pedestrian, but Bartosik crimps the edges with a cocked wrist here, a jutting elbow there, like the bend in a creek or the lacy edge of a puddle. To a score of faint chugs and escalating tones, Kotze and Gries gaze up toward Roderick Murray’s serpentine ceiling sculpture of slender blue lights, perhaps anticipating their return to the sky. Then, just as we become immersed in their meditation, we’re ushered out of the performance space, an unwelcome transition back to puffy coats and noisy chatter.

But does this matter? Not really because water, like dance, is always on the move. Better to have experienced it briefly than not at all. 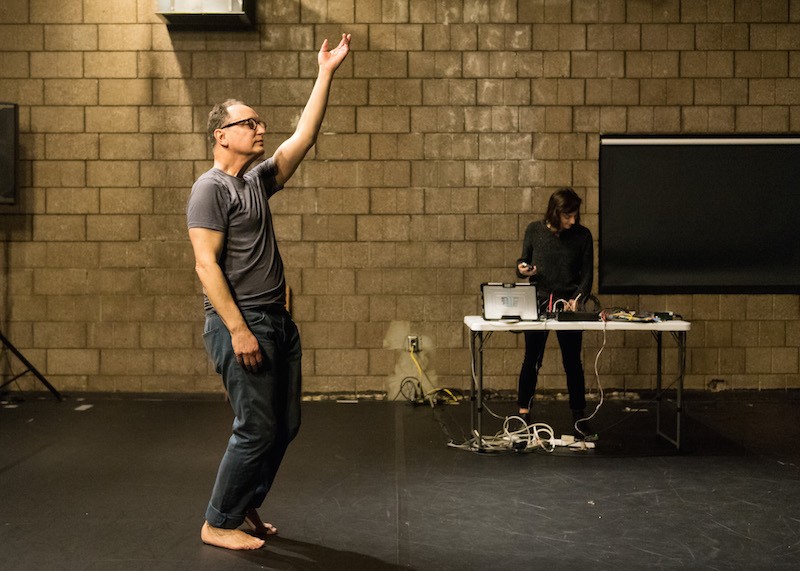 The instructions are simple, the possibilities endless. Big Dance Theater’s world premiere of Cage Shuffle, created and performed by co-artistic director Paul Lazar, follows John Cage’s instructions “to read stories aloud, with or without additional musical accompaniment, paced so that each story takes one minute.” The sequence of stories, called out by Lea Bertucci who also composed the screechy music, is random; the movement, by co-director Annie-B Parson, is not. Lazar recites twentyish one-minute stories from Cage’s Indeterminacy (jokes about monks, anecdotes about the experimental composer and pianist David Tudor) augmented with doddering paces and twitchy gestures. Then, wordlessly, he segues into an extended dance sequence.

Lazar is a serviceable enough actor with an avuncular delivery. He is, however, not much of a mover. Dressed in horn-rimmed glasses and a sports coat, he often looks like a dad doing the robot.

But does this matter? Not really because Cage is the star here. Genius composer, ingenious philosopher, he’s long dead, but in Big Dance Theater’s hands, he’s very much alive. 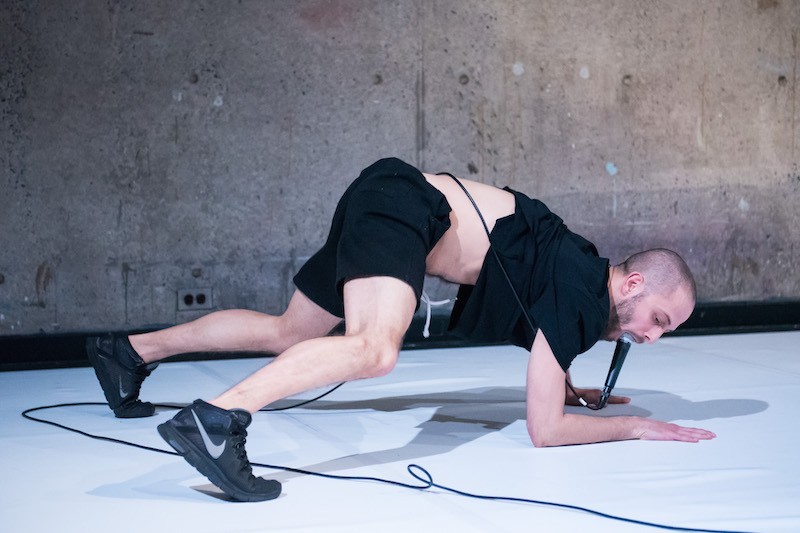 Karol Tyminski in This is a Musical. Photo: Ian Douglas

This is a Musical
Abrons Arts Center, Underground Theater
Choreography and Performance by Karol Tyminski / Video by Michal Andrysiak

Dressed in a black hoodie and gym shorts, Tyminski opens with a series of athletic poses: bridges, tripods, planks. He smacks his body against the floor and swallows a microphone before unleashing his id. He smashes boxes and fondles himself and spews indecipherable text. The performance space of a white square framed by concrete walls resembles a loony bin, which heightens the effect. After burning himself out in his epic temper tantrum, Tyminski takes Dutch leave as a video of him having sex with a man (whose contours have been filled in with multi-colored splotches) flickers to life. If their squirming is any sign, many in the audience would like to take their own Dutch leave.

But does this matter? Not really because Tyminski could care less. He’s a beast, willing to smear his literal and figurative guts on stage. And it’s cathartic. Definitely for me and maybe for him. 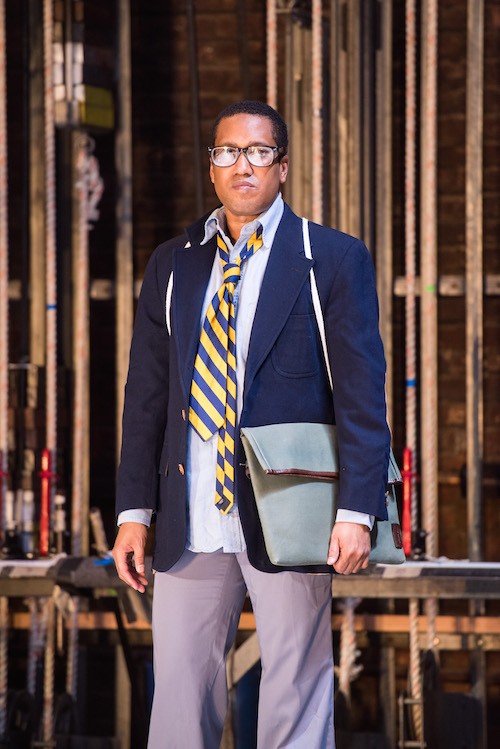 Trajal Harrell's Twenty Looks or Paris is Burning at the Judson Church (S) centers on a fascinating premise: What if the dancers of the downtown experimental scene dialogued with the voguers of the uptown ball milieu? Both forms sprang out of the '60s, and their blending reveals compelling overlaps, specifically in the way walking can be art of the highest form. Harrell structures his piece, which exists in various sizes like clothing, as a runway show. Small is performed here as a solo by him.

He models twenty titled looks, some in silence, others to pop, one to atonal piano music, which suggests Martha Graham as a fashionista. With a knowing twinkle in his eye, Harrell pokes fun at the ridiculousness of labels. Preppies everywhere sport striped schoolboy ties, but a west coast one accessorizes with flip flops while an east coast one favors sneakers. The wittiest, New School Hokey Pokey, spotlights Harrell putting a brown-booted left foot in. Overall, the pacing can be uneven with some looks too long and others a few seconds.

But does this matter? Not really because Harrell is performing research through action. Unmoored from historical time, the piece becomes truth by unification of current space.

The Dance Enthusiast Shares IMPRESSIONS/ our brand of review and Creates Conversation.
Read Impressions here, including another IMPRESSION of Trajal Harrell's Twenty Looks or Paris is Burning... and reviews of other past American Realness performances, including Michele Boulé and Ishmael Houston-Jones and Emily Wexler
Share your #AudienceReview of this show or others for a chance to win a $75 giftcard to Trader Joe's.