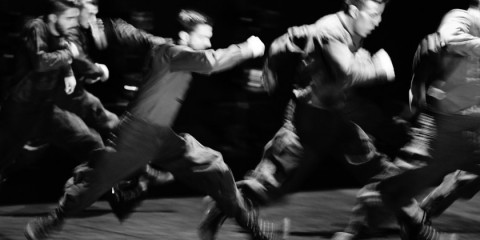 BalletBoyz, a United Kingdom-based dance company known for its masculine athleticism, was founded on the principle of making dance accessible for all. A key way the company achieves this is through cross-disciplinary collaborations.

Young Men, a dramatic portrayal of the horrors and psychological effects of trench warfare, was created in 2015 as a collaboration between the company, composer Keaton Henson, and choreographer Iván Pérez. In 2016, the work premiered as a feature-length film. Its current iteration combines dance, theater, and the original film to make its New York City debut at the Joyce Theater, in honor of the World War I centennial.

Artists of BalletBoyz in Young Men; Photo by Jessie Coleman

While Young Men is not unique in its blend of dance and film, the cleverness with which the two disciplines meld is uncanny. Bursts of smoke smudge the two mediums, so the characters appear to step out of the film and magically land in front of us in the flesh. On screen, an antagonistic general, played by Matthew Rees, chases his troops around the training ground shouting, “Go!” as they leap and tumble. The film fades into the background as the dancers materialize on stage through a cloud of smoke.

The piece is loosely narrative — many of the same characters appear throughout. However, with little dialogue, it’s difficult to make sense of the plot. The story jumps between training grounds, forest encampments, the battleground, and a quaint countryside church.

While some scenes are fairly realistic, others are less literal. In one memorable vignette in the film, soldiers swarm around an older woman carrying eggs in the folds of her skirt. Rees angrily breaks through the men and confronts her. One at a time, he seizes her eggs and crushes them in his palm.

A few moments capture our attention with their emotional relevance. In a powerful solo, memories of battle haunt a soldier. Shirtless, he writhes and convulses about the stage, jolted by the ghosts of his past.

Movement conveys the visceral intensity of battle in a way that, while more abstract, is more emotive than a scene in a movie. However, the beauty of and the grace with which the dancers tumble and leap through one another seemingly romanticizes the topic. During one intimate scene in the film, two soldiers wrestle in a muddy lake. Their grappling is so tender and graceful that we almost don’t know if they’re fighting or embracing. When one man ends up face down in the mud, presumably dead, it’s more picturesque than tragic.

Artists of BalletBoyz in Young Men; Photo by Jessie Coleman

Seeing dance and film intermixed so cleverly sparks some compelling thoughts about the advantages of the mediums. On its own, film often communicates emotion through character development, which transpires over a long period of time. As we get to know different characters, we become attached to them and invested in their plight. Dance, though, relays emotion in a more intangible and immediate manner. The movement makes us feel strongly, but we may not always understand why it has elicited that specific response.

What makes Young Men effective is the scale of the film’s imagery combined with dance’s visceral power. However, the piece is also left with challenges. We don’t get to know the characters well enough to feel emotionally invested in them. At the same time, for a dance piece, the work feels unnecessarily long and cumbersome.

Artists of BalletBoyz in Young Men; Photo by Panaylotis Sinnos

Young Men finishes in a countryside church where a soldier returning from battle is greeted by two women, perhaps his wife and her mother. After the intensity of the battles, the church feels placid and illusory. So how did the plot lead us here? Were all the battle scenes just a dream? As if the show itself were a dream, we feel similarly detached.