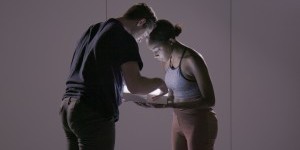 Adapting The Little Prince into a full-length ballet is an ambitious undertaking. A beloved French children’s fable by Antoine De Saint-Exupéry, it boasts a complex plot and esoteric themes of mortality and existence. BalletX performed their interpretation earlier this month at the Joyce Theater and proved they were mostly up to the challenge.

In a well-known TEDx talk, Christine Cox, the director and founder of the Philadelphia-based BalletX, explained that the company’s mission is to innovate ballet by marrying classical lines with contemporary choices. The Little Prince embodies this philosophy, but the piece struggles to maintain dramatic stamina.

Following story-ballet tradition, the ballet has delineated acts and a clear plotline. In this case, it narrates a pilot’s plane crash, his introduction to a young prince, and their fantastical journey together as they travel through space.

The ten-member cast features three principals: the Pilot, the Little Prince, and the Snake. The rest alternates between serving as the corps de ballet and performing various soloist roles such as the Rose, the Fox, and the Narcissist.

The Snake lurks throughout, representing an ever-impending death. As the piece concludes, he takes the Little Prince to the afterworld. Amidst a backdrop of star-shaped lights, the Pilot returns to his journey, reflecting upon the uniqueness of each star in the universe and each creature on earth.

Reminiscent of The Sleeping Beauty, the characters dance short vignettes and present bold personalities that exemplify a theme or trait. Roderick Phifer portrays the famous Prince as playful and naïve; Stanley Glover depicts the Snake as calculating and tricky; and Richard Villaverde makes his sly Fox warm and joking.

Although they offer sweet, theatrical moments, the characters seem underdeveloped psychologically. The dancers must rest on technique when less emotional meat is available. In this fusion between dance genres, the dramatic elements of the classical style become muted.

The production veers into the contemporary realm in other areas. Annabelle Lopez Ochoa’s choreography showcases luscious leg extensions, intertwining pas de deux between all genders, and animalistic pantomime. Pointe shoes appear in certain scenes and solos, but everyone has moments in socks and jazz shoes, allowing them to explore gymnastic floor work. While the movement vocabulary is highly expressive, the music stays minimalistic. Composer and musician Peter Salem sits just below the stage, crafting the entire soundscape with a keyboard and chime effects.

The set design, props, and costumes effectively integrate into the choreography. For the Pilot’s plane, the dancers hold cutouts of yellow wood that form a deconstructed jet. As puppeteers, they move together to create the effect of flight as the “aircraft” soars through space. Details such as the pink and red petal gloves worn by dancers playing flowers and the whimsical way the Snake uses his hat and cane to slither add a child-like quality. Set designer Matt Saunders and costume creator Danielle Truss construct a modernist dreamscape where the fanciful, abstract mobiles of Alexander Calder come to life.

The Little Prince should serve as a long-lasting part of BalletX’s repertory, especially for young audiences. The ballet, even with its beautiful stage design, might struggle outside of the family genre because it does not deliver the sophisticated, emotional side of the story. Even with its overt narrative, the events seem one-note, and the larger, edgier themes did not pack much punch.