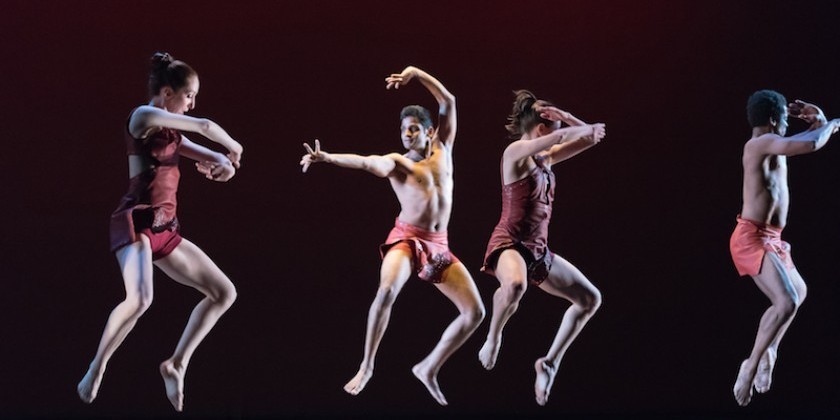 At The Schimmel Center

Battery Dance celebrates its 40th anniversary with a disparate evening of contemporary works presented by the Schimmel Center For The Arts. A staple in the New York City dance scene, Battery Dance shines as a modern dance company whose breadth extends far beyond just commissioning and performing pieces.

Artistic director Jonathan Hollander says the long-lasting success of his company can be attributed to its flexibility. Battery Dance performs, collaborates, and teaches in more than 65 countries and engages thousands of young people. The company offers arts education programs in NYC public schools and provides support for the New York City dance community, including producing a yearly dance festival, the Battery Dance Festival. Its 40th Anniversary evening offers the work of choreographers from four different continents to represent who they are as a company: culturally diverse, technically adept, and universally accessible.

Theo Ndindwa of Cape Town, South Africa opens the night with Observatory. Ndindwa roots his movement in ballet, but jazzy hip thrusts and slinky body rolls add spice and attitude. Sky-high kicks display the facility of the company. The dancers transition up and down from the floor with cat-like agility. Sturdy men partner lithe women, catapulting them into the air in ecstatic moments of buoyancy. During one gravity-defying tableau, a lanky woman stands on a man’s thighs, stretching her long body on a precarious diagonal, as if yearning toward a point of light on the horizon.

Tadej Brdnik’s Inter/ Ago is geometric and meditative. Sculpted limps extend in all directions, which contrasts against the verticality of two white benches that have been situated on their sides like regal pillars. The lush strings of Margarita Zelenaia’s “Byzantine Chants” suggest royalty and excess, emphasized by the dancers’ bodies melting and folding within their silk costumes. The benches are set down to fulfill their traditional purpose; the cast sits on them as a male dancer perform an intense, melodic solo. As the piece closes, the dancers face-forward at the front of the stage, looking out into the audience.

Unnath H.R., who hails from Hassan, India, presents Kavutuvam, a self-choreographed solo that diverges from the rest of the evening. More ritual than performance, Kavutuvam is fascinating to watch. H.R. directs his focus toward the palm of hand or up a diagonal. One hand balls into a tightly clenched fist while the other slices the air. Intense concentration explodes into energetic rhythmic interludes, accentuated by the jingling of bells on H.R.’s waist and ankles. The work begins and ends with him balancing on one leg in dim light to showcase his astonishing control.

The Durga Project, a world premiere choreographed by Hollander, closes the evening. It is a high point of the show. The inspiration for The Durga Project comes from the music: Rajan and Sajan Mishra’s rendition of “Raga Durga” is complemented by Ashirvad/ Sangita Sounds’ “Garuda’s Dream”; the two pieces are woven together by tabla solos from percussionist Samir Chatterjee. A line of dancers expands like an accordion in slow motion as sinewy limbs stretch toward the outskirts of the stage. Articulate footwork responds to speedy drumming, and a thematic gesture of crossed arms and splayed fingers nods toward balleticism. An image — three circles of light encapsulating three pairs of dancers — recurs. Often the movement spirals in towards center, and the dancers engage with one another. The piece is a celebration of Durga, the goddess of many names and all powers.

Battery Dance might attribute its years of success to diverse yet accessible programming as its 40th anniversary season demonstrates. Beyond this program, Battery Dance impresses tremendously with its legacy. It presents a company model that fosters global harmony, bringing together disparate cultures with dance as their universal language.

Because of popular demand and an overwhelming audience response at the world premiere in May, Battery Dance will reprise its Indo-American collaboration of "The Durga Project" as the finale of the 35th annual Battery Dance Festival on Saturday, August 20, 2016, at 6:30 p.m. at the Schimmel Center for the Arts at Pace University (3 Spruce Street).