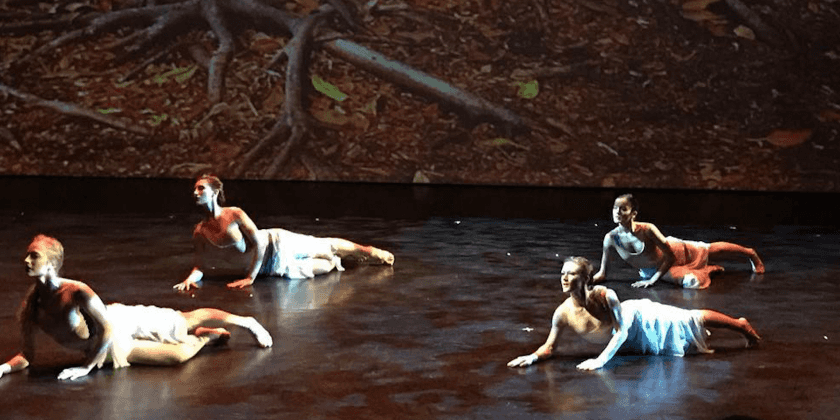 In the 25 years (of a four-decade dance career) that Jacqulyn Buglisi has choreographed for and directed Buglisi Dance Theatre, the artist has chosen to use Graham technique as a base for many of her conceptions. She cites its “dynamic expressiveness that brings the human condition to life on stage.” And is she ever right. Buglisi’s mastery of Martha Graham’s language reminds us that riveting contemporary work can be made using this foundational modern dance vocabulary — what’s old school ain’t necessarily old-fashioned.

Unlike Graham’s theater, with its angular heroines and mythological tales often filled with blood, lust, victors and victims, Buglisi’s stage is gently composed, layered with meaning and painted with only the most stunning colors and textures. She is fully committed to beauty.

Bare to the Wall Suite, a venture into the world of longing, (excerpted from an evening-length work created in 1996, choreographed with Donlin Foreman), finds three couples spinning around each other, their arms wafting above them as if communing with the air. They gather the energy of the atmosphere into their bodies and then propel it outward rapturously.  As they revel and circulate, Virginie Mécène, standing high atop Kevin Predmore’s steady shoulders, is walked across the stage. Mécène observes and contemplates the heavens until, enthralled, she cascades down her lover’s body into his ready arms.

Throughout the evening, exquisitely wrought characters search for answers — questioning and responding to their world rather than imposing themselves on it. Their vulnerability draws us in.

Though we can tell that she is lying along a steady bench, Blakely White-McGuire, in Bare to the Wall Suite, appears to hover in mid-air. She extends her limbs outward, swimming in space, and then, with a startling gasp, pulls her hands to her open mouth as if recalling the presence of a lover who’s gone, but still very much a part of her. Her limp body hangs over the bench; her feet lead her in a panicked circle around it; a flexed foot drags the bench with her as she attempts to travel forward. How will she survive with only memories of her love and this bench for support?

Ari Mayzick in Donlin Foreman’s striking Prelude peers out at the audience displaying his powerful musculature and physical determination. With astonishing facility he moves from long, soaring arabesque jumps, to perfectly pitched tilts, to slides on the floor. But the story is not his prowess. We are fascinated by the few moments when Mayzick exhales and falls flat, nose to the ground, only to seize upward, arching his back and seeming to wonder, “What’s happening to me?” This princely wanderer, as magnificent as he is, faces struggles. As the lights suddenly cut out in the middle of his surging leap into the air, we hope he can survive them.

Swept into sumptuous, vivid environments the moment each work opens, we encounter landscapes of yearning, nature, and spirituality. Flowing group patterns and gestures, deftly constructed and brilliantly performed reveal individual drives. In Moss #5 Variation: Dialogues on what makes us Human, a sneak peak of a grander work to come, we lose ourselves in this sinuous poetry.  When the lights dim, there is a sense the activity we’ve experienced might continue on. Buglisi’s ideas linger with us.

I’m still thinking about Requiem (2001), a choreographic jewel, in which a quintet of women draped in opulent silk robes move on and around pedestals (burial mounds) as if in conversation with God. Perhaps they are angels or recently passed souls spiraling into the light that washes over them.

As Faure’s sublime Requiem fills the air, lighting designer Clifton Taylor’s breathtaking play with Chiaroscuro transports us to a chapel somewhere in Rome. We become immersed in a living, breathing feminized Caravaggio painting.

Later, reading the program notes, we learn that Buglisi was inspired by the Italian Baroque artist, Artemisia Gentileschi, whose work was influenced by Caravaggio. In a time when woman painters were expected to stick to polite portraits and still lifes, the seventeen-year-old Gentileschi dared to address the nude human form. Her strong personal vision and masterful sense of drama brought expressive bodies to life — much like Jacqulyn Buglisi.