At Center for Performance Research

Center for Performance Research's New Voices series is an annual showcase featuring several performances and related events over two days. Though all three artists use humor and an irreverent disregard of dancer and audience conventions as a starting point, they also reach deeper than superficial laughs. All the work is entertaining without trying to be, and wonderfully unselfconscious. The evening retains a feeling of real­ time investigation.

The show opens in CPR's front gallery, where choreographer Elena Rose Light reclines on a pedestal in a white leotard and white rubber unicorn mask. Though we can't see her face, her sexy costume and coy posture embody the work's title, Voluptuosity, while the mask renders the entire scenario absurd.

Eventually Light stands on the pedestal, mimicking the poses of classical marble statues. As she trembles and twitches during transitions between poses, it's clear that being statuesque hasn't rendered her as aloof as she might have hoped. A museum guide's voiceover, praising the sensuality of the statue, draws attention to how we normalize the female form as a sexual object, even when it's cast in cold stone.

Light goes on to remix history and fantasy into a new narrative where female artists are able to role their eyes at their own treatment. Though Voluptuosity is currently a little rough around the edges, Light's compelling timing would make this an interesting evening­ length work.

Klutz is a free­ for­ all choreographed by Alex Romania in collaboration with fellow dancers Millie Kapp, Raquel Mavecq and Butch Merigoni. The opening scene is one of asylum patients or deranged babies learning how to walk. The performers push physical effort to its limits, as they stagger and fall. 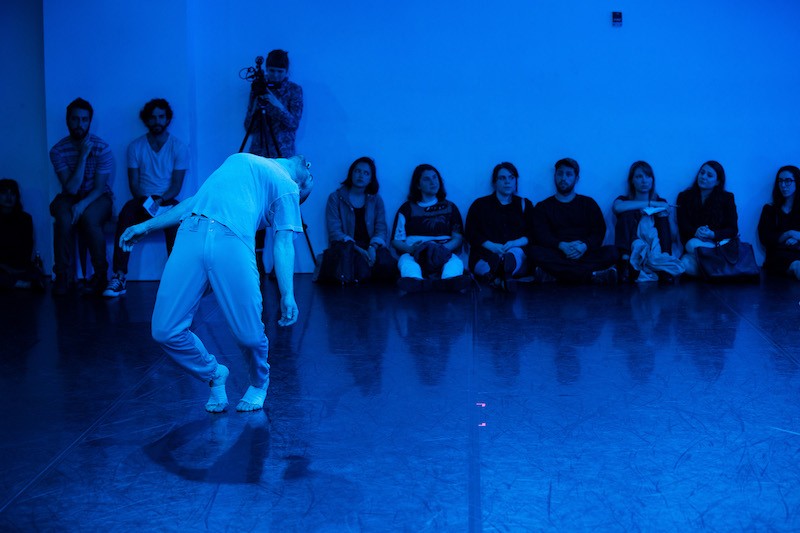 Eventually the four performers begin screaming at one another. It's often unintelligible, but fragments reveal a special kind of dancer­ psychosis: The breakdown of language used to describe the improvisational process. When one person is roughly tossed about, yet screaming about making a choice, the statement is rendered meaningless. How can all four people make utterly unique choices, all at the same moment?

Klutz drags on and is occasionally hard to sit through, but it also feels like therapy for fed­ up modern dancers. If you can get used to the noise, it becomes cathartic. The whining quality of Romania's voice is too theatrical for this piece — the other performers, equally furious, manage to inflect their voices in a way that sounds natural. The unfiltered honesty of all the performers makes this farce successful.

In Jacob Slominski's Untitled, he creates a different kind of farce. Slominski couldn't have cast himself in a better role than that of Untitled's user experience guru. His voice is calming as he thanks the audience for coming, reassuring us that the show will start soon. He tells us that it's just not cool to talk or text during the show. But, he adds, if we need to talk or text to make ourselves feel comfortable, then that's okay too.

Eventually the audience is invited to find their safe, private space, anywhere in the room. Some people remain in their seats while others spread out onstage. The lights dim and then go out completely. Slominski tells a story about a utopian jungle island where survivors of a disaster have built a perfect community. Unfortunately, some members begin to feel that they're missing something. Eventually they design a ritual of divine thankfulness, and Slominski reads aloud the same words he had used to coddle the audience minutes before: “We're so happy you're here. We look forward to serving you.”

He pointedly illuminates that neither the merit, nor, really, the existence, of a performance is important when an audience has shown up to watch itself.