Center for Performance Research's Spring Movement showcase on April 14 (there are three nights in the series, each presenting different artists) included four fabulously un-trendy pieces of choreography. Each choreographer's refined and unique movement language allowed them to communicate successfully with an audience, via moving bodies.

That refinement, is, unfortunately, missing from much current contemporary dance, replaced by text that's more specific or formally inventive than the movement. I'm curious why the under-30, experimental dancemaker zeitgeist shies away from the rigor of physical research, opting for words in lieu of embodiment. These works show that research for dance can, and should, be both intellectual and physical.

Etude, choreographed and performed by Sarah Konner and Austin Selden is functional and unadorned, even as it calls for mounting effort. The mechanics of their deliberate placement (how an elbow bends or a knee folds) mesmerizes, especially as their rolls and lifts pick up speed. Hands and heads dive between limbs and take weight in ways that would be dangerous if the dancers weren't so finely tuned to one another. Konner and Selden wash back and forth across the space with the calm methodology of a wave or a sand dune. 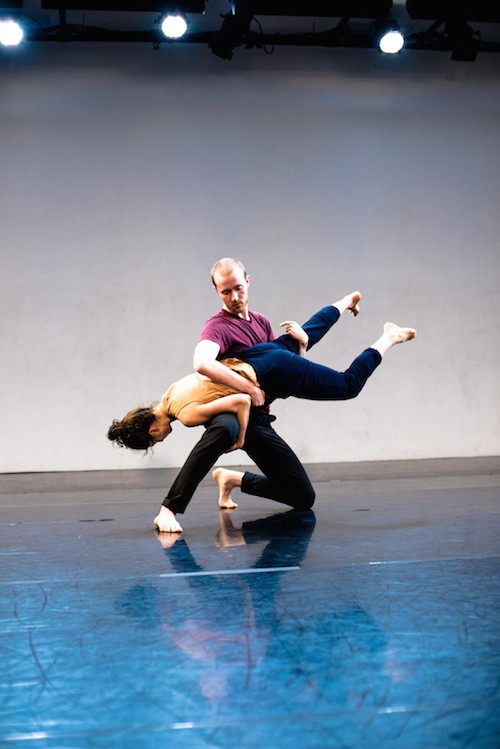 Their momentum is punctuated by brief pauses — too brief, in fact. They appear as re-sets rather than falling naturally within the breath-like pattern of the choreography. The effect is jarring. Eventually the dancers separate to fall in and out of unison, building to wild solos in close proximity. And, despite the odd pauses, Konner and Selden have an excellent sense of timing. Their choreography never lags and neither does the audience's attention.

After bringing their effort to a fever-pitch, the two slow down and finally stop moving. Here's where the lights would normally fade out, or the curtain would come down. Instead, the dancers stay onstage, fully lit as they wipe sweat, collapse on the floor, examine their feet. Though they've come no closer to the audience, it feels incredibly intimate to share these instinctual dancer rituals. Konner and Selden change from forces of nature to exhausted humans on a beautifully enigmatic journey.

Lacey Moore's trio, Antenna, has a clear sci-fi aesthetic: Slick, quirky and well on its way to creating memorable characters. But as of yet, its world feels incomplete. Moore and dancer Madeline Wilcox appear as dolls, or creatures run by clockwork. Their movements are static, sharp and direct. They gaze at the audience with just a twinge of coyness. When dancer Joey Loto enters, the relationship among the three becomes confusing. Is he enticing one of the women to pursue him and thus give up her relationship with her companion? Though the choreography remains clear and specific, the relational dynamic grows muddled and borders on cutesy. I'm curious to see a further incarnation of this work, after Moore has clarified why the characters exist in this world together. 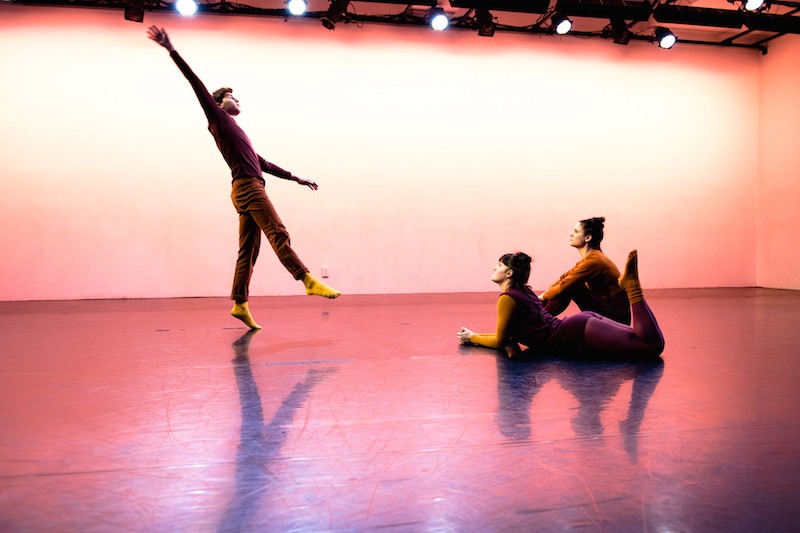 leg kick collage, a piece of surreal performance art choreographed and performed by James Gardella, uses looped video projection, kicks and bounces (in perilously high heels) to exhaust both his body and the audience's patience. As a gender-transgressing unicorn character, Gardella forces viewers to adhere to his pace and his storytelling. Whether we can relate is beside the point. While the sensory overload of Gardella's performance renders it somewhat impenetrable, the closing image of a gravestone, coupled with Gardella speaking pseudo-religious incantations into a microphone, poses leg kick as a formula for queer salvation.

Dancers Louise Benkelman, Doug LeCours and Debbie Maciel revel in undeniable and infectious chemistry during Ashley Yergens' wildly entertaining Pony in there Somewhere. Though the work appeared a bit rough around the edges, that spontaneous quality worked in its favor. I found myself slightly worried about what new height of absurdity the choreography would push to next. 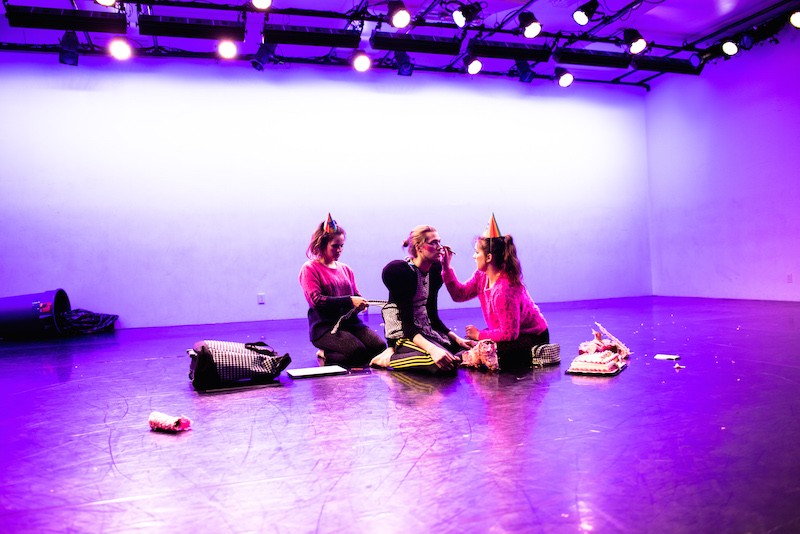 LeCours just wants to go to the party, but his friends — Maciel and Benkelman, standing on either side of the stage with their faces to the wall and half-eaten pizza in their hands — aren't interested. So, of course, LeCours steps into a garbage can to mourn the death of his social life with appropriate melodrama. Once LeCours rejoins them, Maciel and Benkelman open his laptop , it appears, to watch recorded choreography and mimic it as best they can. The computer faces upstage so it's impossible to know exactly what they're seeing, but as they twist and step to keep the screen in sight while they dance, the question, "what is an authentic experience?" is raised.

Eventually LeCours takes the stage in an aggravated solo, ripping apart the pink pony piñata he's been carrying around, even as he shoves it between his legs and pretends to ride. The work closes with Maciel and Benkelman smearing cake and makeup on his face. Pony in there Somewhere is pop pathos at its most millenial.