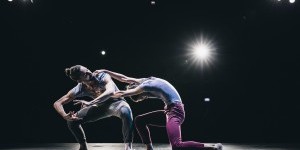 Pair the nation’s largest public urban university system with private funding, and you get a creative incubator for the New York City dance field. Through weeklong residencies, the CUNY Dance Initiative enhances the cultural life and education of college students, establishes new dance audiences, and supports local artists by offering them NYC’s hottest commodity — space. In its fifth-year festival, 11 companies presented work ranging from Ephrat Asherie’s hip-hop Odeon (excerpt) to Urban Bush Women’s sculpturally defiant Give Your Hands to Struggle, from Heidi Latsky Dance’s ON DISPLAY, a pre-show installation, to Sonia Olla and Ismael Fernandez, who connect everyone in a singular, shared moment during their rousing flamenco performance.

The four-night, two-program festival at Baruch Performing Arts Center offers audiences not only proscenium performances but also ushers them in with site-specific dance in the lobby. Kinesis Project dance theatre’s Breathing With Strangers gives spectators an up-close, stripped-down look at dance. Using the lobby’s stairs, benches, and long carpeted space as partners, the dancers draw the audience in to their playful athleticism with smiles, eye contact, and proximity.

Pardon My Heart, choreographed and performed by Parijat Desai, fuses traditional Indian dance with contemporary elements. Bharatanatyam, a classical style noted for its fixed upper torso and spectacular footwork, is also characterized by a refined vocabulary of hand, eye, and facial gestures. Desai’s feet pound out brisk, syncopated rhythms while her upper body undulates like water. A captivating performer, Desai’s face communicates as clearly as her body. Her fingers carve the air like a moving meditation, hands wafting in and out of classical mudras like smoke. Her eyes widen and shift to create moods of charm, wit, and contemplation.

Many of the dances involve the performers speaking while dancing, and in MBDance’s Up and Down Her Back, Kayla Hamilton, Courtney J. Cook, and Maria Bauman-Morales (choreographer and director) elicit giggles with a child-like, stream-of-consciousness dialogue. Using snippets of nursery rhymes interspersed with sandbox conversations, the trio builds community through the shared experience of being women. With large leg gestures carving space, torsos yielding and rolling to the floor, the piece takes surprising turns from innocent wonder to sophisticated experience.

Contrasting with the more lighthearted pieces, Shirabyoshi- A War Time Dancer in White, choreographed by Tanroh Ishida and Miki Orihara, reimagines the undocumented rituals of female dancers who entertained warriors during Japan’s Samurai era. Performed by Orihara, a former principal with the Martha Graham Dance Company, Shirabyoshi suggests traditional Japanese dance as it might have existed in a more recent era. Like a paper lantern swaying in the air, Orihara glides through even the most bound movements with an easy tension. Her laser-like focus is unrelenting as she highlights the smallest movements with an air of mystery and regality.

Mentored by the legendary Gregory Hines, Andrew Nemr uses tap dance as a vehicle for community building. Conversational, funny, and alive with warmth and admiration, Rising to the Tap relates his introduction to, and long-standing relationship with, Hines. Boasting complex, lightning-fast rhythms that explode from his feet like firecrackers, Nemr takes us from boyhood beginnings to technical mastery. Directed and co-written by Adam Koplan of Flying Carpet Theatre, Rising to the Tap blends old-world storytelling with contemporary tap technique to create the feeling of a family gathered in a living room, listening to the tales of their ancestral past.

Loni Landon Dance Project’s For Three evokes a mystical world where constellations form and dissolve in space. Dancers Nicole Von Arx, Ryan Yamauchi, and Rakeem Hardy react to each other’s touch like an amoeba opening and recoiling, their flurries of sequential, spindly movements suddenly arresting. Sometimes yielding, sometimes opposing, the artists seem to ask with each movement, “Here? Is this it?” as we, the audience, bear witness to electrons attracting and repelling each other, circling into molecules, becoming something new.

Pigeonwing Dance shines in Tensible with performers Giovanna Gamna, Forrest Hersey, Tiffany Mangulabnan, Patrick O’Brien, and Victoria Sames flow in and out of kinetic architecture. A wonderful inquisitiveness pervades their movements, as if they are inspecting how their bodies work. A circling wrist absorbs one dancer’s fascination before she rotates it to the floor, never taking her eyes off it. Sculptural and sequential, Tensible dives deeply into the art of humanity, into the relationships we have with others and ourselves.