IMPRESSIONS: Historic and Significant solos by Women (1929-1970) as part of Fridays at Noon at the 92nd Street Y 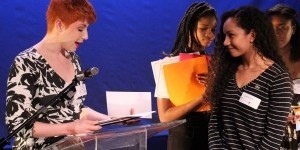 TDE Asks Dancewave's Diane Jacobowitz About Dancing Through College and Beyond

IMPRESSIONS: Catherine Gaudet’s “The Fading of the Marvelous (L’affadissement du merveilleux)” at the 92nd Street Y

The walking sequence is simple, but that doesn’t mean it’s easy. For close to an hour, three men and two women pace a circle over the floor. Although the fivesome does break loose from the relentless coils with wild, willful abandon, this pattern functions as an irresistible force. Like an eddy, it sucks them into its swirls, sometimes the same way and, other times, in new ways.

Cycles — their inevitability, their potentiality — are Catherine Gaudet’s preoccupation in The Fading of the Marvelous (L’affadissement du merveilleux), which made its US premiere at the 92nd Street Y’s Harkness Dance Festival. Like the hands of fate ticking around a clock, these revolutions expose humanity’s rhythms: from creation to decay, from restraint to ferocity. To deny their influence is to deny life itself.

The performers begin in a horizontal line, bare-chested, clad in briefs. Eyes closed, they pad through circle after circle. With keen awareness of their positioning, they advance the loop downstage.

Taking the straight lines of the feet and legs and forcing them onto a curve means the quintet’s toes don’t always point forward. Instead, they crook them to match the arc, landing on the inside edge or the outside blade of the foot. Regardless, they highlight the natural roll of heel, ball, toe.

After many perambulations, when you, like me, may have been lulled into hypnosis, the pattern warps. One by one, the dancers’ eyes pop open. One by one, their necks jut forward, their shoulders rise, their chests hunch — they appear crazed. One by one, they experiment with breaking free.

All at once it seems, they erupt into frenzied gesticulations and guttural vocalizations before finding the cycle again. But now they blow it up into a room-spanning skip; they compress it into traipses in place. They lurch, they thrash, and they lunge through the steps. With a hand on one hip, they preen and strut on forced arches, like Barbie dolls. Occasionally, a person will pose center stage as the remaining four investigate all the ways the circle can evolve, revolve, and convolute while still being a circle.

The interspersions of mayhem ping-pong from absurdity to tenderness. The cast screeches like hungry babies. Two same-sex duos clumsily waltz. Later, sweat dribbling down their bodies, they coalesce into a clump. While the lights darken and brighten as if they’re in a nightclub, they writhe, touching themselves and others. This smooth sensuality, though, gives way to jitters and yelps.

Then, Antoine Berthiaume’s score — all uneasy thrums and warbles — ceases as do the dancers. One man finishes with a finger pointed to the sky, like a concert dance John Travolta. The cycle has undone itself into an end point.

IMPRESSIONS: Philadanco in the Harkness Dance Festival at the 92nd Street Y