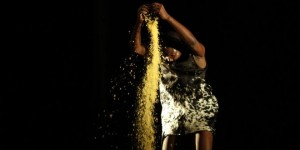 Gregory Maqoma Looks to the Past To Create the Present in his New York Premiere,“Exit/Exist”

Impressions of: A Conversation about Color, Community and More Hosted by 651 Arts and the National Black Theatre

Moderated by Sade Lythcott, CEO of the National Black Theatre (NBT), this discussion developed into a series of complex questions around the historical narrative between African and African American contemporary dance...and more. While Jones may have often driven the conversation, Maqoma offered many a gold nugget in the simple truth of his experience.

Gregory Maqoma grew up in South Africa during apartheid. "I come from a country,” he said, “where we AS INDIVIDUALS had to fight for our own space where we could belong." At his conservatory audition, he was shocked to see black and white bodies competing for the same space. After learning to dance from "Michael Jackson and Martha Graham" he went on to develop an international career as performer and choreographer. Despite his success, he is aware that dance is not a recognized career among his South African community. According to his family, "You can always dance, but you need a profession."

Community became a hot topic. One audience member asked, "Would it satisfy you enough to only create work that touches your community?" Bill T. Jones answered by acknowledging his alignment with multiple communities: "I do not only consider myself a member of the black community. I'm left. I'm homosexual." These multiple identities support Jones' desire to be recognized as an artist who happens to be Black, rather than a "Black artist."

However, this notion of the “Black artist” exists outside of the American landscape and is a defining factor for the lens through which many other nations see work. In fact, Bill T. Jones/Arnie Zane Dance Company was the first "Black contemporary dance company" that Gregory Maqoma saw perform. Now Jones’ company is not an all black or even predominantly black group of dancers. Still, being led by a Black choreographer defined them as a Black dance company to an outside eye.

The notion of the "Black artist" led to questions of responsibility. Another audience member, a woman,  asked about making work that teaches people, that shares stories outside the "dominant culture," and that shifts the cultural landscape. She suggested that as artists of subordinate race, gender, class, etc, we cannot simply make "art for art’s sake"

"An artist does not have to do a god damn thing! They should be the freest people, sometimes literally running naked. Artist should be terrorists! You don't want an artist in your political party," exclaimed Jones.

While Jones clearly stated, “I am an artist before I am black,” he also acknowledged his own activism and advocacy through art. “Do you know what it's like to be one of the first people in the dance world to be recognized as HIV positive? To kiss your white Jewish lover on the lips in 1979? People asked why do [Bill T. Jones and Arnie Zane] have to rub our face in it?” Gregory Maqoma spoke more softly, but also opened his work to a greater goal. “If my work goes beyond and enriches, then I feel I am communicating more than just what is my initial response.”

As 9:00pm approached, the conversations were far from over. Jones came to realize, “You don't have the ‘artist as martyr’ [in South Africa].” Lythcott tried her best to explain the concept to Maqoma and we all watched his face distort in confusion. By 10:00pm, Jones had departed and a number of small groups had formed discussion “Black art,” hip hop, dance history, the current state of cultural representation, and so much more. By 10:30pm one group was headed next door to Applebee’s to continue the conversation.

Jones, Maqoma, and Lythcott were catalysts. And while I loved hearing Bill T. Jones say choice words and seeing Gregory Maqoma’s bemused facial expressions; while I enjoyed discovering similarities and differences between African and African American contemporary dance; I walked away from “History, Memory, and the Creative Process” excited most by the knowledge that this conversation will continue.