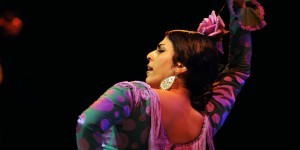 Venue: Theatre for the New City

Teacher, chef, author, and television personality Julia Child once said, “You should never apologize at the table. People will think, ‘Yes, it’s really not so good.’" But, when the marvelous singer/percussionist/scholar Alessandra Belloni conceded to the audience during the bows for the premiere of Voices of the Tarantate that she tried something completely new, she won our sympathy. With time, perhaps her idea of melding dance with recitation will be more effective; the writing more original, the delivery less stentorian. Belloni felt compelled to honor Domestic Violence Awareness Month by including a story of child abuse, delivered painfully by a woman who showed her true strength when she danced with such power in the closing moments, my spine tingled.

For twenty-five years, Belloni has studied ancient sacred chants, drumming, and healing trance dances from Southern Italy. She can carry any show, without the aid of a company, so clear is her attack, her rhythm, her range of texture and pitch. A small woman with a host of black hair, she has created her own line of tambourines (some with pebbles to sound like the sea crashing on the shore), trained drummers and dancers. Her sprightly blonde haired daughter, Francesca Silvano, and Luisa, adorable grand-daughter, stood out in her all-female ensemble, Daughters of Cybele, whose collective energy was too limp to transport us. Their white dresses and red sashes, long, loose hair flying to the infectious rhythms makes one yearn to participate, rather than watch, perhaps in Sicily next August when Belloni has her annual workshop.

When the audience was invited to dance at the end, a long string bean of a man brought his shoulders to the floor, pumped his pelvis to the sky as his bare toes skittered like a neurotic spider. He rolled side to side, his legs shaking, his head bopping, as in a trance. While his dance was similar to each woman who had their solo moment accompanied by Belloni’s encouraging, yet insistent drum, he moved with such total conviction that all doubts of the Tarantate’s power were suspended. Finally, we could see an individual response to a seemingly unpremeditated experience.