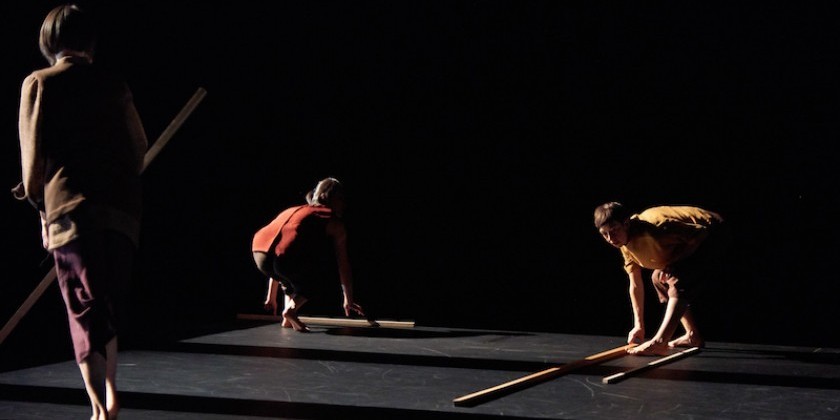 It starts before it begins. Dana Reitz’s preoccupation with and manipulation of light frames the pre-show hubbub. The flash from smartphones, the glimmer of house lights, and the faint luminescence pooling on the empty stage foreshadow the subtle but specific beauty that’s to come.

Elena Demyanenko walks onstage with no fanfare, and the show of blinks and blazes shifts from us to them. In Latitude, the third and final presentation at New York Live Arts of Lumberyard in the City Winter Festival, a trio of women including Reitz glide through task-oriented vignettes. The non-movement elements — lighting design, a quartet of sticks — are minimal, yet the possibilities prove infinite when combined with gestural, geometric actions.

Four panes of mellow light stretch across the stage. Occasionally, they darken to shades of gray, like a collection of artist’s charcoals, while other times, the tips taper to suggest church windows. Once or twice, these rectangles seep into a haze that pours over the performing space.

The dancers traverse this ever-changing schema, their performance intersecting and interplaying with the light. Gripping a stick as if she’s a tightrope walker, Reitz treads on one of the bands of black that separates these panes of light. Her wavering stick casts a silhouette that looks like the propeller of a prop plane. When a duo backs away from a glaring light upstage, their shadows lengthen scarily toward us. There’s the piece that has been made, and then there’s the piece that is being made.

The four sticks act as extensions of the performers. The tallest one reaches perhaps as high as a streetlight while the shortest could be yardstick-sized; the others range in between. The dancers sling them over their shoulders like gun-toting soldiers, and they press them into the ground like world-weary travelers. These sticks are scattered around and about and arranged into a lopsided asterisk or a clumsy tic-tac-toe grid. Intermittently, they rest off to the side, unnoticed but not forgotten.

Although Latitude unspools in silence, it isn’t quiet. Sticks scrape, feet thud, and joints snap, crackle, and pop. The women whisper among themselves, to themselves. One time, they sit around a solitary slab of light and chat inaudibly, as if they’re taking a break to socialize. This score of found sounds reveals the efforts inherent in a dance performance that the swells and urgency of music normally conceal.

The work lacks an arc or a narrative, the forward momentum that often keeps 21st-century attention spans engaged. Yet, for much of the 60 minutes, it remains entrancing with new iterations of lights, sticks, and ambulatory actions that curve and crisscross. Then, it seems, a resolution. The four sticks bisect the four panes — light and wood, ephemerality and solidity united.

If only. A shambling solo for Reitz follows with more dallying of sticks, more walking, and more washes of light. The show shifts from them to us as the audience, previously rapt, issues a composition of fidgets, coughs, and rustling programs. The possibilities haven’t been exhausted, but their effect has been diminished.