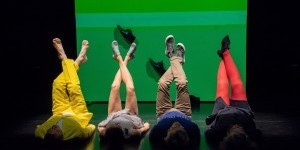 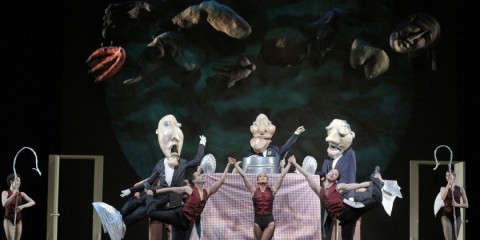 John Heginbotham has found a niche in the world of the satisfyingly quirky. From his 2013 Dark Theater to his recent reimagining of the Oklahoma! “Dream Ballet,” he combines clear technique with surrealist absurdity. Fantasque, his latest work, which made its NYC premiere at NYU Skirball last weekend, finds him with a partner in crime, puppeteer Amy Trompetter, whose creations exaggerate and enlarge Heginbotham’s fantastical ideas. The result is mystifying and delightful, the marriage between puppetry and dance natural. Like dancers, puppets are visual representations of ideas that are most effectively conveyed without words. 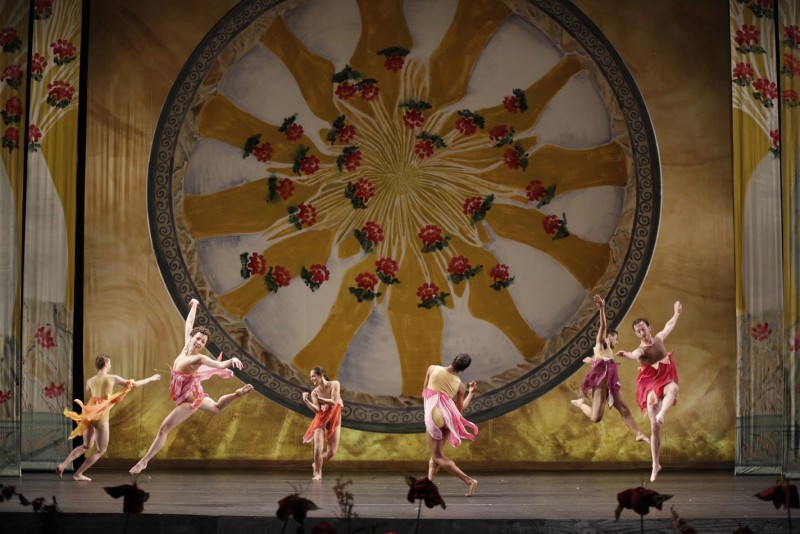 The title implies a relationship to the 1919 bizarre comedy La Boutique Fantasque, a one-act ballet that used comedy, folk dance, and mime to tell a love story of can-can dolls in a toyshop. This Fantasque’s “storyline” is outlined in a child-like, hand-drawn comic in the programs, further highlighting the nonsensical nature.

What starts as a vaguely “origin-of-life narrative” — the sun and the moon, and the eventual birth of a child — takes bizarre twists and turns. Fantasque welcomes a disparate cast of characters, from an army of rats (like in The Nutcracker) to a terrifying blue Devil. Using dream logic where a romance veers into murder, the characters appear and disappear out of nowhere. Everything and everyone is oddly discombobulated.

Regardless of plot, the weirdly wondrous scenes, props, and score delight: a man on stilts is the moon; a baby and a rat become friends; and a foot, hand, belly, head, and pair of breasts are dangled from the ceiling, resembling a solar system of massive, disembodied body parts. The puppets cohabitate the space alongside the dancers, the latter of whom add grace and life. George Shevtsov plays the piano compositions of Ottorino Respighi and Gioachino Rossini, and when the plot loses us, the musicality of Heginbotham’s movement is grounding. 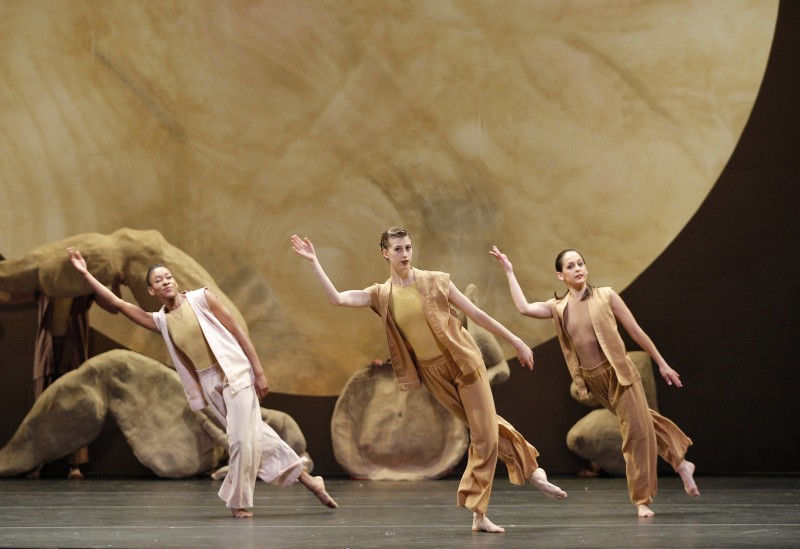 The over-the-top obviousness of some of the characters contributes to the humor, particularly for the children. An innocent baby offers the devil a flower, which makes him sneeze. The devil dons a chef hat and browses a massive, disheveled cookbook before salting the dancers in preparation of eating them. In a hysterical moment, two demons appear to be getting along until one slaps the other’s head off and steals it, causing a little girl in the audience to scream “redo, redo!” 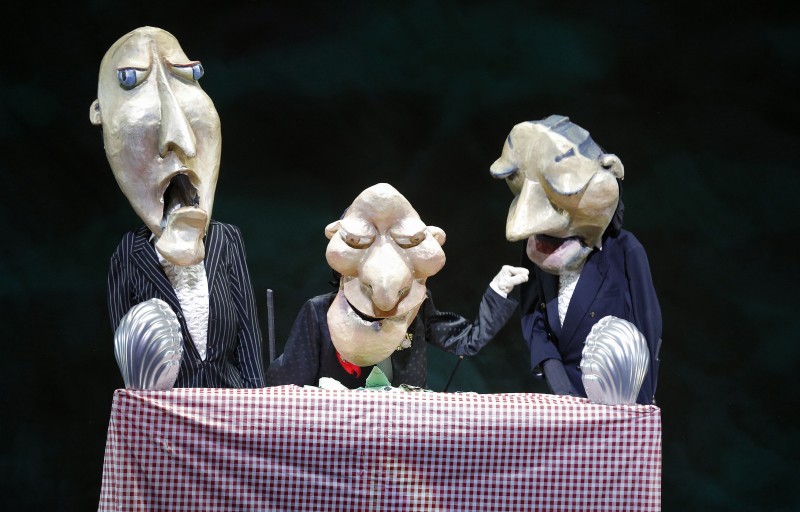 Heginbotham proves to be the grand puppeteer, holding us by strings and jolting us in unexpected directions even as our rational minds try to make sense of the work. We are completely at his mercy, with no sense of what comes next. We certainly could have never predicted an interlude between the first and second “acts,” in which Shevtsov leaves his piano and performs a flamenco duet with the baby, who flails and tries to imitate his gestures. Like Shevtsov and the baby, the key to Fantasque is to surrender control and allow oneself to be the puppet of Heginbotham and Trompetter.

The Dance Enthusiast Shares IMPRESSIONS/our brand of review and Creates Conversation.
For more IMPRESSIONS, click here.
Share your #AudienceReview of performances for a chance to win a ONE-YEAR SUBSCRIPTION to Marquee.TV for you and a friend

DANCING WITH HISTORY IN SPACETIME: Martha Graham Dance Company at The Joyce Theater and Stephen Petronio Company at Skirball Center