IMPRESSIONS: Part One of DANCE NOW NYC 2018 at Joe's Pub with Emcee TruDee 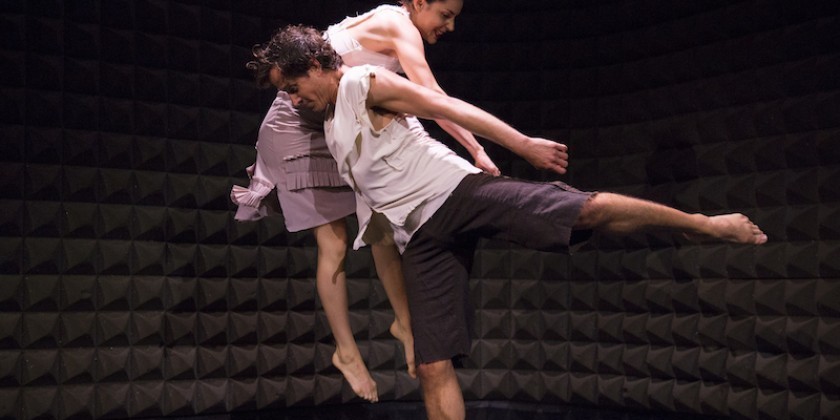 Following the recent heat wave, this year’s Dance Now seemed like a rainbow flavored ice, something to snap you out of a stupor. By the end of the concert, the applause was deafening. Everyone felt the rush. Created fifteen years ago as a pilot program of the Downtown Arts Festival, this annual series "challenges artists to investigate new directions within the limitations of Joe’s Pub.” The ten artists who presented their 5 minutes, a time limit enforced by the always engaging emcee TruDee (aka: Deborah Lohse), on the cabaret stage of Joe’s Pub stayed on the light side, providing an amuse bouche to explore their longer works.
DANCE NOW host TruDee (aka: Deborah Lohse); Photo: Yi-Chun Wu
First up, a duet from Bridge of Sighs performed by Douglas Gillespie and Nicole Vaughan-Diaz, choreographed by Kate Weare in 2008, centers around spanking, slapping and teasing looks. For anyone who has seen Weare’s work, this excerpt was a reminder of her talent for playing on the rhythms of intimacy.

Gus Solomons jr, regal in an effervescent orange robe designed by Oana Botez, owned the stage in the premiere of his largely stationary solo Dude, performed to Steely Dan.
The Bang Group, represented by Louise Benkelman, Jeffrey Kazin, Nic Petry, Tommy Seibold and Amber Sloan, nailed the charms of nonchalance in Contredanse as set to a clean tap beat, usually performed in unison, sometimes in a circle, sometimes in two lines.

The New York Times wrote about Dance Now in 2006 that “half the fun is going in blind and walking out with a new artistic crush,“ a theme that Trudee winningly toyed with in her inter-dance skits. My crush hit me hard with an excerpt from Jane Comfort and Company’s Beauty as performed by Ellen Smith Ahern, with the affirming and dismissive sounds by Leslie Cuyjet and Brandon Washington. Aiming to please, Ahern adjusts her poses, her attitudes to win the cooing approval of Cuyjet and later Washington, only to realize after much vamping that the two were oblivious of her. Celebrating her company's 40th anniversary, Jane Comfort made Beauty with the support of a 2010 Guggenheim Fellowship.

For the show finale This is Desire, Part II, Brendan Drake began by telling the audience that he had been denied several grants recently on the basis that he had not been forthcoming about being queer. With an increasing din of squeals from the audience who were in on the joke, Drake broke into a jazzy trio with Quentin Burley and Jordan Demetrius Lloyd circling Shannon Nash who can bash her leg on her forehead with slapstick ease.

MOVING PEOPLE: Deborah Lohse on the Energy of a Room, Doug Elkins' "Fraulein Maria," and the Time a Drag Show Transformed her Life — Plus, a Special Appearance by TruDee