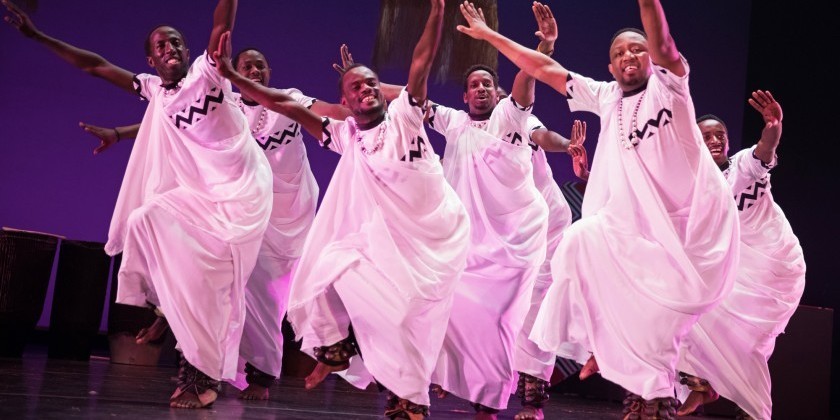 Book your calendar now to catch BAM’s DanceAfrica 2020! This festival heals, pumps up, and moves one to tears. Let us all bow to the dancer/choreographer Chuck Davis who founded DanceAfrica in 1977 and praise his vision and inspiration.

BAM/Restoration Dance Youth Ensemble at BAM's DanceAfrica; Photo by Julieta Cervantes
As the audience entered the BAM Howard Gilman Opera House, they could study the seven statues set on wheat-covered pedestals glowing on the stage and reflect on Africa’s ancestral history. Spine-tingling drummers played on the stage's edge to open the show. Dancing down the aisle came a procession of young girls in white, then elders in vibrant-colored African dress, followed by the memorial candle bearers in white. The audience squealed with amazement and clapped along with the drums. The pedestal coverings were pulled to the ceiling to reveal dancers. The BAM/Restoration Dance Youth Ensemble from Brooklyn jumped and twirled with such joy and rhythm that you’d think you were seeing Alvin Ailey American Dance Theater perform a Ronald K. Brown piece.
Perfectly named, the Elemental Exuberance . . . A Memorial Tribute began with the DanceAfrica Spirit Walkers and concluded with the appearance of Abdel R. Salaam, DanceAfrica’s current artistic director and executive artistic director/co-founder of Forces of Nature Dance Theatre. Acknowledging the first row of assembled elders, Salaam reminded us of the 25th anniversary of the Rwandan genocide, a tragedy recognized this year, and his personal mission to take us all from darkness into light.
Abdel R. Salaam at BAM's DanceAfrica; Photo by Julieta Cervantes
April 6, 1994, a plane carrying Rwanda President Juvénal Habyarimana was shot down and crashed in Kigali. The President, an ethnic Hutu, was killed. The Hutus blamed the Tutsi minority for the crash. In retaliation, Hutus slaughtered 800,000 Tutsi and moderate Hutus, over a hundred days in the East African nation. Paul Kagame led the rebels who chased the killers out of Rwanda; he has been in power ever since. The Rwandan people and economy have rallied, but questions linger as to why the plane was shot down.
“If I thought about what I went through, I would just die. So I do it for peace of mind. And I laugh,” so said a Tutsi survivor of the genocide as translated by the astounding Dorothée Munyaneza, a Rwandan survivor, at her event at Baryshnikov Arts Center two years ago.
Spirit Walkers at BAM's DanceAfrica; Photo by Julieta Cervantes
Far from the staggering extremes of Munyaneza’s performance, DanceAfrica 2019 focused on recovery and pride, with only a flash, though a convincing one, of the fear and devastation during the genocide in Rwanda Reborn: The Remix (world premiere) performed by Inganzo Ngari, DanceAfrica Spirit Walkers, BAM/Restoration Dance Youth Ensemble. Women were thrown up against slanted boards painted with a zig-zag, red design. Soon, a heap of limp bodies accumulated center stage. Rwandan-born artist Malaika Uwamahoro led us out of the horrors with the clarion clarity of her spoken words.
This year’s visiting company, the Rwandan dance troupe Inganzo Ngari, was founded in 2006, only twelve years after the slaughter, to preserve the traditional Rwanda dances. During the twelve dances performed at BAM, their ankle bells sang with each earth-pounding step; their arms spread wide with their hands flexed open; their faces glowed with broad smiles. The men, who usually performed apart from the women, danced with props, such as hoes and spears. The women danced with gourds on their hips or bowls on their head. Most memorable were the galvanizing dances from Northern and Western Rwanda, Kinimba-Nkombo, in which the high-stepping men swung their waist-length white wigs in wild circles to the sound of the drummers. Ah, those drummers, striking their sticks on the drums with vaudevillian flair and fierceness!
Inganzo Ngari at BAM's DanceAfrica; Photo by Julieta Cervantes
Blessed with perfect weather and turnout, the DanceAfrica Bazaar circled the Opera House on the streets and sidewalks. One hundred fifty vendors from around the world offered African, Caribbean, and African-American food, crafts, books, jewelry, and fashion. Who could resist? Not me . . .
DanceAfrica is remarkable in creating such a many-sided celebration of the power of hope and heart to speak through the arts.