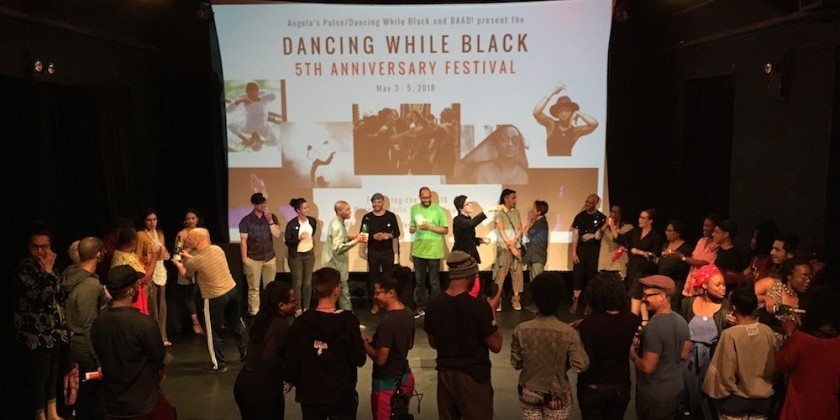 Paloma McGregor’s Dancing While Black project just turned five-years-old, but don’t be fooled by the single digit; this youthful, artist-led group has a wise and visionary soul.

At the final performance of its fifth anniversary festival, three Dancing While Black fellows shared their solo choreographies along with the exceptional Donna Clark, who gave an electric performance of Eleo Pomare’s 50-year-old, signature solo, Narcissus Rising.

This year marks the 10th anniversary of Pomare’s death, and tonight, Dancing While Black acknowledged their ancestor. Pomare, who championed the uncompromising expression of Black experience, seems an important spiritual guide for this group whose mission is to create  space for Black artists to define themselves on their own terms.

The night begins with the audience lined up on the sidewalk outside the Gothic Revival stone chapel that’s home to BAAD!. In a field of wild grass near the building, a lanky, dark figure slowly travels toward us. It’s NIC Kay performing PUSHit!  While the El train noisily clatters in the background, Kay’s astonishing presence transforms our sense of place, carrying us from the Bronx’s Westchester Avenue to an alternate, dreamlike reality.

A bouquet of balloons — white, including one in gleaming, textured silver —  float magically above Kay’s head. Though dressed for a race — in a black tracksuit covered with images of tiny stars and planets, and sporting Nikes — the artist can’t pick up speed. Kay haltingly makes way to us, body parts pulsing and pushing against the air. These short, buoyant shakes, accentuated every so often by a quick, high kick or a deep, wrenching lunge, aren’t effortless by any means. As Kay gets closer, we see struggle, labor. The airy quivers that transport the artist forward could be shuddering sobs.

Kay’s imagery compels but disturbs. The stars and planets covering the clothes; the sleek running shoes; the always forward, bouncy trajectory; the weightlessness and incandescent glow of the balloons all promise hope and freedom. But everything isn’t what it immediately appears to be. The balloons are connected to the artist by the neck, almost like a noose. Any lightness that exists is balanced by pain.

Following Kay to the stage of the chapel, we are transformed. We’ve become seekers, ready to witness the intimate, personal journeys of the other choreographers — to understand and feel part of them.

Jasmine Hearn, who’s impossible to stop watching, has the wonderful ability to interest you in her every action, no matter how idiosyncratic. She begins Higher Hoe by running on the stage in circles, going forward and back, covering long distances, waving to people she sees on her outing. She takes breaks to stare at us inquisitively and count, or she repeats bits about ho’s from the lyrics of the Ludacris song. Does she want a response?

People laugh. “You can’t turn a ho into a ‘ho—usewife.” But is Hearn laughing? As she rips off layers of clothing, continuing to throw her body into lush movement, I wonder.

Kayla Hamilton’s here/hear begins with an announcer, as in the Big Top. Step right up. “If you are here, you can hear.”

Hamilton, a beautiful Black woman, whose body is larger than what conformist notions of a dancer’s body should (ugh) be, has been taunted by her share of idiotic remarks. here/hear creatively addresses them from the point of view of victor, not victim.

Asking an audience member to hold on to her glasses, she takes on slurs delivered aggressively by a cool, cruel Alicia Raquel. Hamilton attacks the space, projecting strength by magnificently dancing. She rolls through such comments as, “You’d be so much better if you lost a little weight,” or “You’re good, but we all know you look different.”  We feel her vulnerability and hurt at this barrage of cruelty as a film revealing parts of her naked body illuminates a screen upstage.

But this young woman is a survivor, and better yet, one who will no longer allow anyone to mess with her identity. Hamilton’s keenly composed tale of a woman who may have felt like an elephant at the circus (a huge inflatable pachyderm is also part of the piece) concludes by asking for her glasses back. She squarely peers at the peanut gallery and quietly responds to any disrespectful comment that might come with an assured, “I think I misunderstood what you said.”

Operating under the precept that no artist is peripheral, Dancing While Black and their festival co-presenter BAAD! (Bronx Academy of Art and Dance) are doing important work supporting the diversity and vitality of our dance field. Here’s to many more years of their contributions.