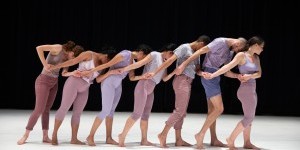 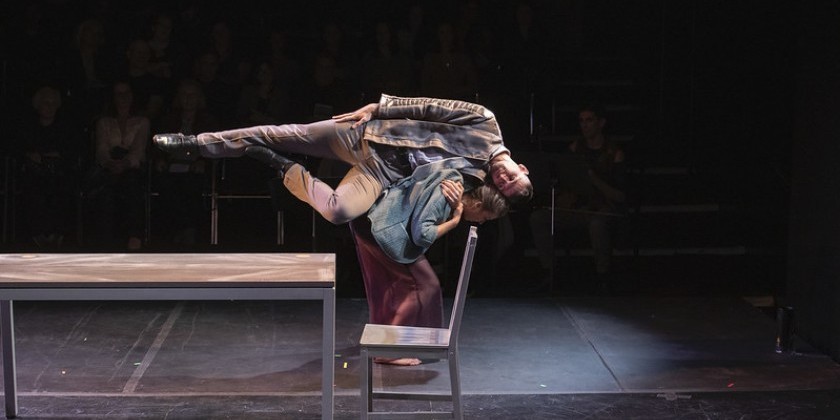 Danse Theatre Surreality’s Thoughts and Prayers centers around a couple as they navigate calamities straight out of the current headlines. Felix (Thomas Giles) and Dana (Emma Factor), supported on either side of the small stage by instrumentalists, embrace, lunge, dip, and turn through formal movement sequences by assistant director and  choreographer Kyra Hauck. Conversational dialogue between Felix and Dana is interspersed and repeated between gestures. As disasters strike, the couple’s domestic chatter breaks down and the musicians rise up, using their instruments as voices against injustice.

The space at TADA! Youth Theater, designed and lit by Luther Frank, is just big enough for an eight-person ensemble, two chairs, and a table plus additional props necessary for surreal effects. Tennis-court seating provides a dimensional perspective on the action. The structure is tight, almost claustrophobic, with annotations describing each disaster laid out in the program like directions for an orchestral score.

The show is split into five movements, capped and closed with an Overture and an Epilogue. This formalism underscores the seriousness of the episodic events yet provides little room for interpretation or ambiguity. Clarity reigns in a nightmarish world bearing spooky resemblance to contemporary America.

Catastrophe arrives like clockwork. Each section signifies a disaster to be reckoned with, heralded by ingenious props and sound effects. I: A red balloon pops for “Shooting,” II: sand flows from the ceiling as if leaking from an hourglass for “Natural Disaster,” III: Dana removes translucent picture frames from the ceiling for “Family Tragedy,” IV: the cast members each throws a handful of dirt for “Governmental Transgression,” V: two panels smeared with red descends to obscure the stage for “Terrorist Attack.”

Dana and Felix mobilize the table and chairs as extensions of their own traumatized bodies. They scour the tabletop as if seeking absolution from unfounded accusations, flip the chairs back and forth as if searching for bodies beneath rubble, and crawl underneath the table as if taking refuge from an impending blow. Their shared movement vocabulary, echoed by the musicians, features pedestrian gestures, intimate weight-share partnering, and sharp, technical lines.

The sonic landscape, composed by Giles and with sound engineering by Will Davis, is frenetic yet poignant. Rendered by a host of excellent musicians, Giles’ score functions both like the soundtrack to a film and the script for a chorus.

Co-artistic director Lauren Hlubny’s bravest move in the campaign to fuse the worlds of dance, theater, and music to uncover narratives of injustice was to split the musicians into political factions. Sometimes they oppose each other with vague tense gestures, and sometimes they unify into a Greek chorus befitting a tragedy. Saxophones (Ivan Arteaga, Guy Dellecave, Josh Lang, Galo Morales) represent Congress, and Strings (Manami Mizumoto, Sergio Munoz, Charlotte Munn-Wood, Lena Vidulich) portray The Activists. Toward the end, they move around Dana and Felix with simple, mesmerizing walking patterns as if locked in slow-motion battle and hesitant parley. After kneeling to one another and forming heterogeneous groups, they align forces and seem to reach a resolution to prevent further disasters from befalling the community.

Giles himself plays the sax with particular fervor and intensity. He coaxes the instrument into contorted, breathless registers, gasping at abrupt pitch changes and bending his whole body into growling low tones. Throughout, Felix has a confusing allegiance to the reeds while he caresses and carries Dana, who does not play an instrument.

Some transitions into and out of movement feel jarring or muddy, perhaps intentionally. Certain phrases of Dana’s choreography feel too virtuosic for the rest of the work, as if drawing a clear boundary between movement and text. After all, what dance theater can do that theater cannot do is collapse fully into physical language: for once, a person giving a monologue can digress all the way into a mute, expressive body flailing through space. Thoughts and Prayers hangs on to conventional dance imagery a little too long before conceding to visceral abstraction.

Thoughts and Prayers is bold and relatable. The themes, characters, and images aren’t new; rather, the genre-defying fusion of music, dance, and theater mobilized against injustice is the stand-out ingredient.