DANCE NEWS: Be Part of MIT Music and Theater Arts' COLLISION SHOP aka THE POSSIBILITY OF JOY, Facilitated by Dan Safer

At The Museum of Modern Art

The program included Martha Graham at 100: A Personal Birthday Message from Donya Feuer (1994); Ett spel om föremål och människor (A Play for Objects and Chorus)(1967); and The Nijinsky Films: A Life and Requiem for a Dancer (1975).

The camera can magically capture the complexity of dance as it tosses us into alternate worlds or derails us from traditional linear narratives. On March 4-8 at The Museum of Modern Art (MoMA), Dr. Mark Franko, Professor of Dance at Temple University, curated a five-day dance film series celebrating the film works of Donya Feuer spanning from 1967 to 2000. 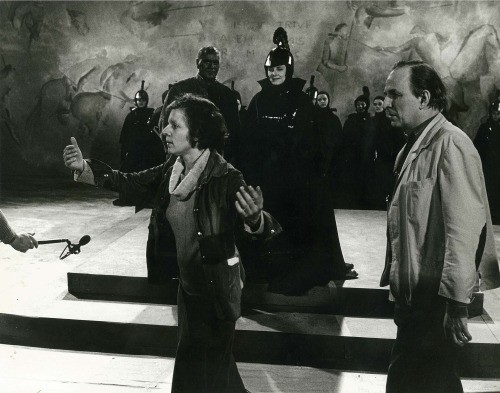 Donya Feuer on the set of The Magic Flute. Sweden. 1975. Directed by Ingmar Bergman. 135 min. Courtesy of Mark Franko

Donya Feuer was a dancer, choreographer, theater director, and filmmaker who possessed an insider’s eye that captured the intricate details of dance movement with exquisite mastery. She moved to Sweden from the United States in 1963 and began many collaborations, most notably an illustrious partnership with Swedish director Ernst Ingmar Bergman. She died in 2011, but left an infectious impression on the experimental dance world that expanded into theatre, opera, and film.

Martha Graham at 100: A Personal Birthday Message from Donya Feuer, pays tribute to Graham’s legacy three years after her death in 1991. During this made for television piece, scheduled to air on Graham's 100th birthday, Feuer recalls first seeing Graham's company in Philadelphia, and later studying and performing with the group in the 1950’s. While leafing through dance images and interviewing former Graham dancer Robert Cohan, both artists reminisce about the physicality of Graham’s choreography as the force that conjures dramatic intention. In this film, we learn of Graham’s impact on Feuer’s journey: first as a dancer, then as a filmmaker.

Ett spel om föremål och människor (A Play for Objects and Chorus) is shot in black and white and begins with young Caucasian male and female dancers frolicking around a gallery of ancient rune stones in the Historical Museum of Stockholm. The women wear solid dark leotards and tights; the men are shirtless with dark tights. They run toward the camera and spill over onto the sides of the museum gallery before colliding with the camera lens. Their slow, evenly measured gestures feel devoid of emotion. There is no narrative, but a gradual shift in light suggests the passage of time. As the dancers perch onto flat stone slabs, we imagine the feeling of cold stone against warm skin. We contemplate the cycle of life and death as the young adults meticulously dance around ancient artifacts. Are they reckless and disrespectful, or, are they perhaps a reminder that even space around static ruins can vibrate anew.

The Nijinsky Films: A Life and Requiem for a Dancer. 1975. Sweden. 55 min. Courtesy of Mark Franko

The last film of the evening is Feuer’s The Nijinsky Films: A Life and Requiem for a Dancer. Surreal and episodic, this piece offers a congenial nod to experimental dance from an experiential dance pioneer. We watch a man who appears to be Vaslav Nijinsky run through deep snow as if being chased. The camera tumbles through a montage of studio rehearsals, snow, and darkness, then vacillates between a stage and a hospital room. While on stage, in the studio, or the hospital room, the man marks ballet movements with detachment. Silently he repeats movements over again, each repetition paired with the excruciating sound of wood splintering under the pressure of his jumps.

Feuer remembers Nijinsky both as the Michelangelo of dance and as an ornament groomed for the royal court and later the Ballet Russe. Her film delves into Nijinsky’s insanity, which a voiceover gently refers to as "his transition into his own mental twilight."  Nijinsky was diagnosed with schizophrenia in his 30s and spent nearly 30 years in and out of institutions mostly as a mute. He would periodically came back to life (as if by magic) leaving those around him more confused about the conditions of sanity and the murky consequences of divergent realities.

Feuer’s collection stamps a paramount moment for dance on film that encouraged curiosity and provoked deep contemplation about captured movement. This series at MoMA allows us to peek into the marriage of dance and film that is expressive, archival, experimental, and visually captivating.