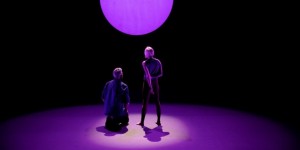 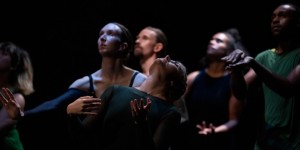 “If I thought about what I went through, I would just die. So I do it for peace of mind. And I laugh.”
So translates Dorothée Munyaneza as we hear the voice of a woman, a Tutsi survivor of the Rwandan genocide that began in 1994. Munyaneza was there, twelve at the time, witnessing the horrors until her mother was able to move them to London.
Munyaneza begins and closes Unwanted standing close to the audience, stage right, listening and translating women’s testimonies, delivered in soft, even tones. From the objective stance of a journalist, Munyaneza and her extraordinary collaborator Holland Andrews gradually forget themselves to embody the pain of both these war victims of sexual violence and their unwanted children. They sing like angels, hyenas, lunatics, moving between three microphones, one downstage and two upstage. The two women, one Rwandan, one American sit on their haunches, side by side, as they pound sticks into wood vessels with a force that should have punctured the BAC floor, until Andrews tears over to a mic to shriek with a deafening reverb until she, thank the Lord, disconnects it.

Exhausting, haunting, and fascinating, Unwanted is powerful enough to change its audience forever. Both performers have voices that rip you open and expand your awareness. They leave you wondering about the resilience of women and about what kind of artists are willing to fall, voluntarily, into an abyss of unspeakables.
When Munyaneza moves, she pinpoints our focus on tension, or its release. She often throws her head so that her back bends with a asymmetrical curve and rebounds languidly. Her fingers, just as her voice, quiver inventively. For some time, she claws away layers pasted like a poster on a sculpture, by South African visual artist Bruce Clarke, of corrugated metal bearing a towering photograph (or painting) of a black woman.
Dorothée Munyaneza in Unwanted; Photo: Maria Baranova
Munyaneza, who currently lives in Marseille, France and sang part of the original soundtrack of the film "Hotel Rwanda," met Andrews in an art exchange in Portland, Oregon. What kismet! Both should be scooping up awards. Around the same height, Munyaneza has an androgynous look, her hair cropped to her scalp, while Andrews is curvaceous with wild, big hair. Their amazing score was created in collaboration with French composer Alain Mahé.
Unwanted was developed, in part, during a BAC Artist Residency in the spring of 2017. Munyaneza is supported by FACE Contemporary Theater, a program developed by FACE Foundation and the Cultural Services of the French Embassy in the United States with lead funding from Florence Gould Foundation, Institut Français, and the French Ministry of Culture and Communication.

The Dance Enthusiast Shares IMPRESSIONS / our brand of review and Creates Conversation.
Check out our other IMPRESSIONS here.
Share your #AudienceReview of this show or others for a chance to win a prize.