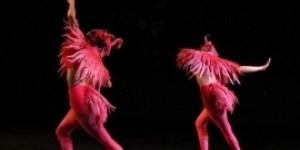 Eclipsis Flamenco’s Encounter of Two Worlds  carried the viewer off into distant places and times with whimsy and magic and multi-media. Ankle bells and large feathered headdresses delighted the audience as the dancers executed percussive footwork in astonishing unison.The blare of a conch seashell — blowing to all four corners of the proverbial Earth  -- symbolized by the stage-- regaled us. The experience was so eerily beautiful one mostly didn’t mind the false starts it took for the performer to achieve his sound.

Full of pomp and circumstance, this opening to the evening’s performance, gave us a stimulating cultural experience in pre-Hispanic, Mexican dance although it appeared disconnected from the rest of the evening’s Flamenco pieces. The introduction also provoked anxiety. Certain transitions appeared problematic. I found myself asking questions like: “Are they going to make it? Is it going to work? Will she pull her hair up into a ponytail in time?” The enchantment would have lasted longer had the quick changes and logistical efforts been less apparent.

One of the most successful elements of the performance’s first portion was the juxtaposition of a dancer, Maria Elana Anaya, with the projected image of herself dancing by the ocean and walking up stairs of a Mayan Temple. The live, stage-dancing Anaya and her projected image played with similar Flamenco movements in dramatically different settings.  Although the connection between the coastal and Mayan temple projections and the Flamenco tradition felt forced, Maria Elena Anaya proved a  gorgeous artist.  When she took the stage, all eyes were on her mesmerizing rhythms and fluidity.

I wished the creators spent more time highlighting the excellent Flamenco talent of the musicians, singers and dancers and focused less on the confusing storyline.

The show was strongest when the performers were actively dancing, singing, and playing Flamenco. The heat turned up as a beautiful singer, Lina Ravines, crossed the stage in a backless dress and shawl singing of time’s endless march forward.  Her powerful voice signaled a shift  -- the true beginning of the show. Although the following episodes presented were a series of unconnected vignettes, they captivated by revealing the true heart of Flamenco - its ability to tell deeply personal stories of pain, joy, and seduction through rhythm, gesture and timbre.

A real treat was the solo by singer Alfonso Cid who used his voice as if it was a dancer — rising, falling and entering our visceral space. We heard the echo of the desert and the cry of the ocean as he sang. Then there was Anaya who danced in a gorgeously ruffled white dress that swayed perfectly with her steps. The sound of her heels rhythmically striking at the floor punctuated the space, but her body and face floated along showing no sign of effort.  Anaya’s woman in white, equal parts composure and passion,  embodied the essence of Flamenco.