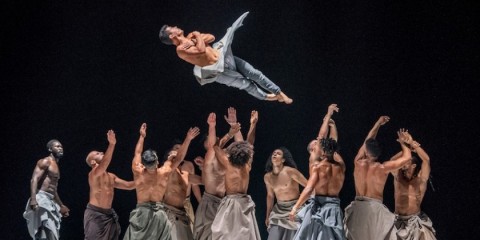 The sold-out, fifteenth Fall for Dance  started with a winning program, juxtaposing cultures, sensibilities, and virtuosic live music. Caleb Teicher’s New York City Center Commission Bzzz stood out as a gem for its sonic clarity, pacing, and deadpan humor.
Comedic timing is far trickier than tap, and if you’ve mastered the latter, as Teicher has, then it’s natural to look for new challenges. His laugh-out-loud, disarmingly sophisticated work for seven dancers was lit by Serena Wong, who created an illusionary set framing the dancers and beatbox vocalist, Chris Celiz in a three squares of bold color.
Caleb Teicher & Company's Bzzz; Photo: Stephanie Berger
A founding member of Dorrance Dance, Teicher plays off expectations, with razzle-dazzle footwork which he turns on and off as easily as water from a faucet. While tap visionary Alfred Desio connected his floor to a synthesizer in the 80s, expanding the range of sound that a tapper can make, Teicher's golden collaboration with Celiz renders body percussion and tap irrefutably contemporary.
Boston Ballet in Jorma Elo's Bach Cello Suites; Photo: Stephanie Berger
The evening began with Jorma Elo's Bach Cello Suites which opens with Sergey Antonov playing his cello alone on a spotlit stage left. Ten members of the Boston Ballet performed the fast, neoclassical choreography largely made up of duets. The work has just enough quirks, (a head put placed in the small of a back, a couple embrace asymetrically with one arm stretched parallel to the floor, heads jerking to the side) to assure us it was by Elo and not by George Balanchine, whose influence was apparent in the pacing and partnering.
Sara Mearns in Lori Belilove's Dances of Isadora Duncan — A Solo Tribute; Photo: Stephanie Berger
Next, for a startling contrast, came New York City Ballet principal Sara Mearns in Dances of Isadora Duncan — A Solo Tribute with Cameron Grant on piano. Mearns shed her turn-out and high extensions in deference to the lilting, skipping spirit of America’s first dancing rebel. She makes us see the music and feel the romantic joy of floating within the patterns set by the composers Chopin, Brahms, and Liszt. Dropping rose petals for the finale, Op 39, No. 15 by Johannes Brahms, Mearns seemed period perfect.
The Barbarian Nights, or the First Dawns of the World closed the program. The 13 men of Cie Hervé KOUBI, the acrobatic company of Algerian Herve Koubi flipped and turned on their hands making their skirts fan out, and leaving us to ponder the mysteries of male bonding.