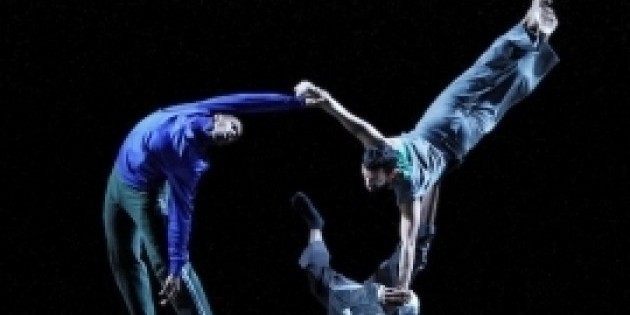 Weds March 27th 2012 at The Joyce Theater
Ravel: Landscape or Portrait? (2012)
Music: Maurice Ravel, “String Quartet in F Major”
Story/(2013)
Music: Franz Schubert, “Death and the Maiden”
Music performance: Orion String Quartet
Choreography: Bill T. Jones with Janet Wong and The Company
Danced by Bill T. Jones/Arnie Zane Dance Company
Lighting design: Robert Wierzel
Costumes: Liz Prince
Decor: Bjorn Amelan
When artists enjoy as much success as Bill T. Jones, it could be easy for them to rest on their laurels and make work that is safe.Bill T. Jones/Arnie Zane Dance Company’s opening night at The Joyce Theater was anything but. Filled with bold physicality and exquisite detail, Jones' choreography expresses a wide spectrum of human emotion, which often hits us in the pit of our stomachs.
In Ravel: Landscape or Portrait?, a soloist works against a crowd. Throughout the piece, the soloist’s role is filled by a different dancer, highlighting the company’s unique personalities and ferocious movers. Their actions, loose yet concise, reveal a sassy groove that borders on “attitude.”

Jones navigates his performers’ bodies through space so they appear like gusts of wind blowing across a field, constantly shifting the stage landscape. While the choreography is fluid and complex, we still see with perfect clarity individual exchanges within the overall picture. At a few points, the dancers move in unison and it feels magical — like watching a crowd of pedestrians suddenly align on the same foot.
The movement of the live string quartet, although lodged on the sidelines, is essential to the life of this composition.

Story/, the second piece of the evening, is part of an ongoing investigation into the concept of indeterminacy. It is an abbreviated and reimagined version of Jones’ 2012 production Story/Time — a work featuring Jones reading seventy of his one-minute stories. Now snipped to thirty-minutes, the work was created in partnership with The Orion String Quartet, Jones’ longtime collaborators. The choreographer approached the group with a list of musical compositions and asked them which they would be most excited about playing. They chose Franz Schubert's “Death and the Maiden,” a vivacious, yet romantic piece. The choreography does not attempt to match the dramatic energy of the music, but instead offers an amiable conversation.
Using fresh, green apples as props, the dancers toss and roll them according to a combination of what look like baseball signals. All of the throwing and catching feels risky, but the action never escalates to chaos.

While most of the movement is grounded and released, Story/ features several highly physical moments showcasing the technical prowess of the performers. One particular interaction sees two partnering women whip out triple pirouettes, and then land into a series of 180-degree kicks — impressive to say the least.
An intimate duet between two male dancers recurs throughout this work. Their emotional interaction is so contrary to the athletic nature of the rest of the piece that we are ensnared by its subtlety and humanity.
With arresting performers, striking stage compositions, and palpable physicality, it’s clear why the Bill T. Jones/ Arnie Zane Dance Company continues to enthrall audiences thirty years after its formation.