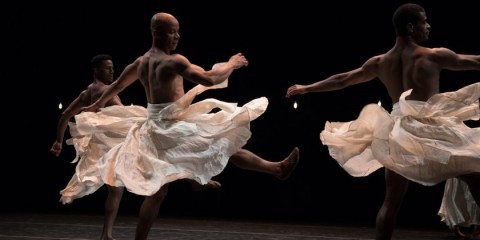 Grupo Corpo’s performance at the Brooklyn Academy of Music featured two pieces that explored themes on the opposite ends of the spectrum. Bach is an ethereal tribute to the composer in the title while Gira is an earthy tribal ritual. Both showcased the company’s uniquely Brazilian style that fuses samba, xaxado, capoeira, and ballet that is the brainchild of the company’s co-founder and lead choreographer, Rodrigo Pederneiras.

Trained in classical and contemporary styles, Pederneiras danced in Buenos Aires before co-founding Grupo Corpo with his brother Paulo in 1975. The company was the first major dance presence in Belo Horizonte, a city in Minas Gerais, Brazil’s third largest region. “It really is a family affair. I started with my brother, brought in my sister, and now my son is also involved. The dance sucked us all in,” said Pederneiras in a phone interview.

Paulo continues as the artistic director and lead set and lighting designer, creating sculptural environments that come alive onstage. According to his comments from the program notes, “Each dancer’s movement is different, and yet the idea of being a group is not lost. That’s where the dance draws its strength from.”

Indeed, one of Grupo Corpo’s assets is their dynamic use of the ensemble, which they showcased beautifully in Bach. The cast of 19 dancers alternated between powerful moments of unison and intricate, layered phrasing. The performers — all of different heights, races, and body-types — interacted like an ecosystem, teeming with the life of vibrant coral reef. To heighten this piscine effect, the dancers wore unitards that switched from black to indigo and then ended as gold. Marco Antônio Guimarães composed original music in reverence to Johann Sebastian Bach, and his score captured classical rhythms and motifs that blended with flowing, electronic crescendos.

The breathtaking set, a configuration of hanging poles reminiscent of the internal pipes of a church organ, suggested a heavenly atmosphere. The poles became characters as the dancers gazed at them from below. In other moments, they hung from the bars and entwined themselves in tight, rapturous embraces. The petite, perky powerhouse, Ágatha Faro, ascended and gripped one pole for at least seven minutes, a sign of intense stamina.

Pederneiras discussed his interest in exploring “dance inside the body,” and his company’s dancers embodied an internal effervescence. Their joyful movement was classical technique running on an electric current – the lines and shapes remained precise and clear, but each leap had an extra bounce while every pirouette demonstrated extra lift and breath.

An examination of the rites of Umbanda, a native Brazilian religion that combines Catholicism and Kardecism, Gira was a grittier display.  The dancers, both male and female, wore white raw-linen flowing skirts that exposed their bare chests in an evocation of totem statuary. The lighting made the viewer feel they were watching a hidden ceremony in a dark forest surrounded by torches.

Grupo Corpo in Gira at BAM: photo by Julieta Cervantes

Pederneiras revealed that he created Gira after spending three months researching Afro-Brazilian religion and immersing himself in Ubanda. The attempt to include so much history into a dance piece is admirable and reinforces his commitment to making Brazilian-flavored choreography. However, much of the movement in Gira, particularly the patterns of jumps with swaying torsos, looked similar to Bach. Coming after that resplendence, Gira fell a bit flat. From a programming point of view, the questionable pairing lacked significant choreographic range. In addition, Bach was created almost three decades before Gira, highlighting little evolution in Pederneiras’ dance making.

Grupo Corpo has over four decades of history under the Pederneiras family and boasts a scintillating body of work. The company recently started inviting guest choreographers to create new repertory, and the talented dancers would benefit from the introduction of other choreographic voices. With a slight reboot, Grupo Corpo could wield more power on the international stage.