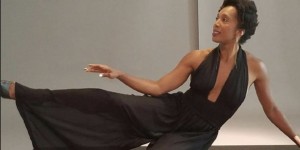 Marina Abramović: The Artist Is Present, Museum of Modern Art, Monday, May 24, 2010

© Betsy England 2010
I. I walk into the first gallery of Marina Abramović: The Artist Is Present at the Museum of Modern Art and see them right away. A naked man and woman face one another in a doorway, performing Imponderabilia, originally performed by Marina Abramović and Ulay (Uwe Laysiepin) in 1977. To get through, one has to slide between them, and before entering the gallery, I thought I would have no problem doing this.

To my consternation, I cannot bring myself to approach the doorway, let alone walk through it. I blush, I can’t decide which person to face, and as I strategize my walk, I am anxious not to look as if I am staring at the performers’ nakedness. Instead, I look at the rest of the exhibition and come back.
By that time, the shift had changed and two men stand in the doorway. I feel comforted that I am acquainted with one and am (finally) able to walk towards them. I pretend to read the wall text, and then, taking my bag from my shoulder and holding it in my right hand, I push it in between them. I face the one I (barely) know and step carefully into the space between their feet. I feel their body heat and smell their nervous, cold sweat. I feel their chests on both sides of my torso and their penises knock against my thigh. My eyes focus on my purse in my outstretched right arm – it has already made it through. As I slip free, I want to break out into a smile. I made it! Anxious not to seem as if I’m smiling for sexual or perverse reasons, I stifle the smile, walk away, and sneak a glance back at the two performers.

On the way home, I brush against dozens of bodies without hesitation as I board a crowded subway.

II. She’s sitting on a bicycle seat ten feet above the floor, and each of her feet is on a metal bar that protrudes from the wall. Her naked body is highlighted by a rectangle of white light, and the rest of the room is dark. She slowly raises her arms to the side and over her head before lowering them. She is performing Luminosity (originally performed in 1997 by Abramović), and my first thought is that she looks like an angel hovering above us.
Her eyes scan the room and then focus on a man below her, maintaining eye contact as she slowly raises and lowers her arms. I am impressed by how much power she has even though her naked body is suspended and in a spotlight before us. He does not dare to move.

I stand near the man and hope that she will also transfix me with her eyes, but once she is finished, she goes back to scanning the room. I ask him if he knows her. He says no.

III. The artist is not present on the sixth floor of the MoMA, where the exhibition takes place, but her presence haunts the galleries. Videos and images of her cover the walls, re-performances like the ones above punctuate the space, and artifacts from her original performances are spread throughout. As I look at the van in which she and her partner, Ulay (Uwe Laysiepin), lived, I imagine their bodies curled around each other on the floor.

Feeling the need to be in her presence, I walk down to the second floor where Abramović is performing the piece titled The Artist Is Present. She sits on a chair in the middle of a large rectangle and looks into the eyes of the museum patron seated across from her. Viewers are allowed to sit around the perimeter of the rectangle, and as I slip into a free space, a fellow museum-goer whispers that the man in the chair has been there for over an hour. Viewers are allowed to sit in the chair one by one and look into Abramović’s eyes for as long as they wish.

Installation view of Marina Abramović’s performance The Artist Is Present at The Museum of Modern Art, 2010. Photo by Scott Rudd. For her longest solo piece to date, Abramović will sit in silence at a table in the Museum’s Donald B. and Catherine C. Marron Atrium during public hours, passively inviting visitors to take the seat across from her for as long as they choose within the timeframe of the Museum’s hours of operation. Although she will not respond, participation by Museum visitors completes the piece and allows them to have a personal experience with the artist and the artwork. © 2010 Marina Abramović. Courtesy the artist and Sean Kelly Gallery/Artists Rights Society (ARS), New York

Time slows down in The Artist Is Present, and I find that the man who had sat there for an hour was not an exception. As a woman takes her turn after him, her body slowly relaxes into the wooden chair and her eyes blink more and more infrequently as she enters into a communion with the artist. The energy that passes back and forth between Abramović and the woman spills out into the rest of the room, and I find myself being lulled into the comforting quiet of the two figures in the middle of the rectangle. Time also slows down for me, and a woman next to me says she has been there for four hours. The wall text says nothing or everything is happening between Abramović and the person in the chair, and I feel like I am taking part in the everything that is happening between them.

Installation view of Marina Abramović’s performance The Artist Is Present at The Museum of Modern Art, 2010. Photo by Scott Rudd. ( SEE ABOVE PHOTO)

Abramović’s performance depends on the presence of the museum patrons, as do the re-performances four floors above her. Imponderabilia is not nearly as shocking in pictures as it is in performance, and footage of Luminosity would not allow for the confrontation between the performer and the viewer that I had observed. In a retrospective, we take stock of an artist’s work and consider her legacy, and in this retrospective where the presence of the artist, the viewers, and the performers is so important, presence gains another angle. My presence at and participation in these fleeting performances makes me a witness to them and charges me with the responsibility of carrying the memory of her presence and her performances after she has gone.