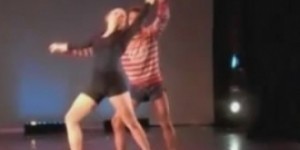 If an innocent, isolated from worldly affairs and media, saw this evening of duets, they might think twice about loosing their virginity. Save The Country  (from ART OF LOVE a tribute to Laura Nyro – 1997) is free and breezy with a spine tingling close as Oisin Monaghan twirls Jacqueline Stewart with her feet aloft. The rest of the duets are tender at times, but very careful, deliberate, polite, and restrained - as though any wrong move could destroy a tenuous relationship. Women seem to have the upperhand; men know their servile place.

But that same innocent, upon viewing this program, might be compelled to dance, compose, study architecture, formalism, classicism, and psychology. Choreographer, writer, scholar, the German born Henning Rübsam is a throw- back, who honors balletic traditions, crafting his dances with musicality, clarity, and nuance. He also loves to dance, especially evident in his romantic romp in the selections from his 2012 Brahms Dances.

Aside from the delightful Save the Country, two of three premieres Russian Lesson and Sarao stood out for their intriguing ambiguity, and indirect communication. The scores for both these works are fascinating, The Grooves being oddly seductive and understated, while Ricardo Llorca’s piano solo is passionate and sophisticated. His guitar composition for Caves is also fabulous.

In Russian Lesson, Juan Rodriquez moves with relaxed precision, seemingly an aloof, calculating loner willing to while away some time with another stranger. This combination of ease and exactitude would be welcomed in more of the performance, which often seemed prim, although granted, much of the choreography is demanding.

The septet version of Half-Life Reloaded, originally performed as a quartet in 2011, gave the dancers a chance to jog on their own path, inviting your eye to jaunt from one side of the stage to another.

Matt Van is lifted by Juan Rodriguez in Russian Lesson.

Founded twenty-two years ago, Sensedance has an old soul. Beginning the program with Bach and closing with Brahms, bravely celebrates Rübsam's love of formalism despite the prevalent de-constructivism around him. The fact that his newest works have more emotional shading bodes well for the company’s evolution. Roundly applauded by a full house, Sensedance's program proves that a small ballet company with a single choreographer and small budget can thrive.