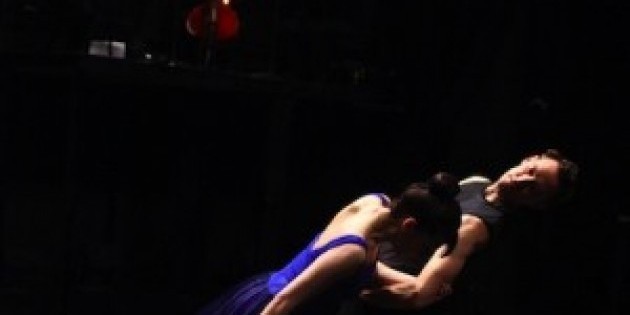 By Tara Sheena
View Profile | More From This Author

Choreography by Pam Tanowitz in collaboration with the performers

@Tara Sheena for The Dance Enthusiast

Pam Tanowitz is a meticulous composer of movement who put one of the foremost American ballerinas and a leading Merce Cunnigham dancer on the same stage at The Kitchen in her work, Untitled (The Blue Ballet). But were they really “sharing” the stage?
The stunning artists I refer to are Ashley Tuttle and Jean Freebury, respectively, who were part of an all-star cast that included John Heginbotham (courtesy of the Mark Morris Dance Group), Sash Dmochowski, and Brian Reeder to complete the structural chef-d'oeuvre that is Tanowitz’s newest creation. Set to Morton Feldman’s String Quartet #1, the 75-minute work is played live by the acclaimed FLUX Quartet. What results is a sophisticated study of dance and music. Through a combination of Cunningham-esque off-kilter movement and distinct balletic classicism, Tanowitz illuminates her astute attention to Feldman’s delicate score.
Tuttle introduces the work with a series of turns across the space, landing in a small lunge out of each rotation, ushering in this world where all the inhabitants live in isolation. Each dancer is placed around the space, engaging in their personal movement motifs; Dmochowski swings her left leg in a clockwise fashion three times while Reeder skips freely around the space. These moments never sync up or acknowledge each other, but they do allow the gentle push and pull of the Fluxus score to guide their energy.
Sometimes a literal interpretation, sometimes merely background accompaniment, the music integrates itself with the dance in many ways. At moments, the gentle wave of Feldman’s score offers background sound to the grand balances and sky-high extensions of the dancers. At other moments, the movement skitters and slows to bring the gentle stream of sustained music into the figurative forefront.

Heginbotham has an especially keen sense of musical timing in his solo moments (not surprising given his current position working with the master of musicality himself, Mark Morris). He seems to brush over the fluid sounds with ease and, despite his muscle-bound frame, he provides some of the most mature and engaging dancing of the evening.

Though I thought a greater relation between movement and music could be forged, the larger fissure is the relationship of the dancers to each other. I longed for someone to
break this set up of isolation. Even in a duet between Reeder and Tuttle - one of the only moments of sustained physical connection -  they fail to meet eyes or even acknowledge the other body so close to their own. Later, when Tuttle and Freebury leap across the stage, side by side, they fail to realize their concurrence. When four dancers move their feet in small shuffling steps across the space, yet again, they do so independently of each other.

Bodies may  inhabit the same space, but this space was largely devoid of human connection. Tanowitz sets up a  blue world literally and figuratively: hues of blue light up the stage as a disconnected, disparate world continues on.

IMPRESSIONS: Cora Dance in "down here"

A Day with May