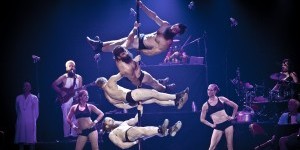 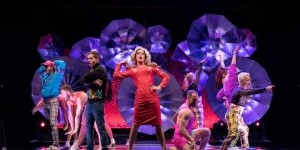 Circus is spectacle, but that doesn’t have to mean bedazzled pageantry. During Recirquel Company Budapest’s Non Solus, the opposite is true.  The theater becomes as quiet, dark, and spare as an empty church, and that’s the point — to spend 55 minutes with your heart in your throat, your hand over your mouth, marveling at the feats of two extraordinary men.

Artistic director Bence Vági says Non Solus (Not Alone) was inspired by a stay in Chile’s Atacama Desert. In that sand-and-sky vastness, he realized he would never be alone because (paraphrasing his program notes) one’s sole true companion is one’s own soul. This may be true, but to me, something much more mystical, altogether mythic, unfolds on the stage of BAM’s Howard Gilman Opera House.

The stage design both honors and disrupts traditional circus venues. The classic theater-in-the-round is preserved via Mylar-esque sheets that hang from stage left and right. Shimmering and rippling like twinned waterfalls, they reflect the action in a hazy, dream-like fashion. A pockmarked curtain stretches across the back where, occasionally, a golden orb glows against it as if a solitary sunbeam has mistakenly poked its way in.

Into this moon-scape enters one man and then another, their chiseled forms whitened with chalk. They appear like angels who’ve fallen — or were flung — from heaven, their desire to return to the stars palpable.

Circus forces the eye to read the stage differently. Instead of movement that careens across it like physical text, circus winnows and lengthens the space into an airy column. To scale these heights, apparatuses must be employed. With a rope (Renátó Illés) and a trapeze (Gábor Zsíros), the duo grazes the upper reaches of the theater. Often, only the crease of an ankle or the fold of a wrist connects them to their apparatus. In one jaw-dropping moment, Illés suspends by the nape of his neck, the rope wrapped around it like a loose noose.

With balletic finesse, the men (often indistinguishable in the dimness) etch their bodies into the shapes of bows, arrows, and asterisks. They glide deliberately through each position, their limbs hands on a clock that acknowledge each moment. Yet, no matter how close they come to flying away, they plummet to the earth as their apparatuses jerk and sway. Gravity is a god these angels must worship.

The two form a partnership, getting to know themselves in the process. One slings another over his shoulder, and they sweep through the air on the trapeze. Employing handstand canes (they look like bicycle seats) on an altar of sorts, they arch and droop into poses evocative of Michelangelo’s artworks.

During what may be a last-ditch effort to rouse the god(s), Zsíros twirls in a stationary circle. He holds a rod attached to his pearl-colored skirt, and as he revolves, faster and even faster, he becomes a cyclone. Speed is ecstasy, and repetition, an invocation.

Maybe these death-defying efforts appease the deities or maybe one of the men has gained enough self-knowledge to ascend, but at the end, Illés, the soul to Zsíros' body, grips a hitch in his teeth and soars out of sight. Darkness falls.

If a signature motif exists in circus, then it must be the grip. Often, that grip is the hand, clutching the apparatus or, most scarily, another person. One slip, and it’s death to be sure. Yet circus is a religion devoted to tenacity. To hang on is to be divine.