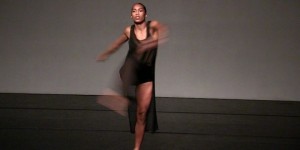 By Raja Kelly
View Profile | More From This Author

Going Gaga for Sarah Michelson or My Devotion to Ohad Naharin

Going Gaga for Sarah Michelson or My Devotion to Ohad Naharin

© Raja Kelly for The Dance Enthusiast

It can be difficult to "see" the work  of a choreographer if their reputation is grand.

Sarah Michelson and Ohad Naharin are two choreographers whose work can be filtered through their reputation. Both artists are known to be extremist. Naharin has developed a technique: “Gaga” on which his work is created. Gaga researches pleasure, sensuality, and sublimation in the body. When dancers hear “Gaga” they themselves go “gaga”- their eyes roll to the back of their head, while pushing their bodies juicily forward to splay the chest or inner thigh. “Oh, I love Batsheva.”

Michelson, on the other hand, usually receives one out of three responses from dancers when referred to in conversation: 1. “Do I know Sarah Michelson, she’s a god.” 2. “She’s insane, and her work is terrible, ridiculous and she’s full of herself. “ 3.“No, I don’t know her, but people either love her or hate her.”

I have never seen the work of Sarah Michelson before and yet I talk about her as if I have.  It took me some time to convince myself that I hadn’t actually seen anything at all before “Devotion Study #1 - The American Dancer” last week at the 2012 Biennial of the Whitney Museum.

Waiting for the show to start I intended on ridding myself of my preconceptions by chanting silently. "Sarah is not egotistical. Sarah is not God. Sarah is not insane. Who the F%#k is Sarah Michelson?"

Devotion Study #1 - The American Dancer is comparable to getting a tattoo. It doesn’t actually hurt, it’s just annoying and it’s what you signed up for - 90 minutes or more of the same piercing image that ,at times, you wish to separate yourself from. I got this  feeling while watching  Michelson’s dancers walk backwards on their toes as they were challenged by the other bodies in the space, the walls, and  the very specific patterns that forced them to switch their direction, repeat cycles and pause. Their action was set to a hypnotizing, metronomic-electronic soundscape designed and sourced by Michelson and James Lo.

Have you ever watched a small group of needles go in an out of your skin at 210 cycles per second?  It’s exhilarating - as were Nicole Mannarino, Eleanor Hullihan, Maggie Cloud and their dancing counter parts.  These girls have a style that is compelling to watch. I wanted to experience Mannarino’s transcendence, leaving behind only a body and sweat, and Cloud’s fierce, fearlessness that changed Michelson’s study into a game. How does Michelson create such euphoric emotion within choreographic limitation?

When you’re getting a tattoo, the artist usually tells a story. Stories take you away from thinking that the experience is painful.  Michelson and Richard Maxwell, playwright and director, who wrote the text for Devotion Study #1, tell stories while the audience contemplates the five backward-circling devoted martyrs, and a huge neon  head.  Focused solely on Hullihan, I lift out of my seat, wanting to go with her as she limps backward towards the audience only to turn around and speedily recede away. I ignore Michelson and Maxwell’s storytelling; yet, from their dialogue I remember sentences about God, as well as vulgar, personal sex confessions; topics that often come up in the tattoo parlor. I remember hearing Michelson say something like, “I just want it to be beautiful.”

I call myself a Naharin/Batsheva fan because, "I want to be one of them dancers." I want the experience of doing what I think it is they are doing on stage - and so do a lot of people.

I am devoted to Batsheva, so this weekend I wanted to know more, to dig deeper and uncover exactly why Batsheva is known as “the best.”  Why do people go oh so “gaga” over them and why does the Israeli Ministry of Foreign Affairs refer to Batsheva as “the best known global ambassador of Israeli culture?”

Batsheva Dance Company is composed of bodies of various shapes, sizes, and shades of beige, splaying their shadowed underarms, inner thighs, backsides, fears and desires for our viewing and thinking pleasure. Batsheva carries a new idea of unison to the foreground. The movement between the dancers does not always share always the same shape or style, but it constantly radiates the exhilaration of moving. That is what we are subconsciously delighting in as we experience the synchronized spirals, arches, torso-twists and contorted poses –both calmly balanced and wildly dynamic- that occur in Naharin’s glowing, green box.

There were at least nine people surrounding me that smiled when Debussy’s “Prelude to the Afternoon of a Faun” played into the show, and maybe 40 people who rocked their bodies along to the theme from " ‘2001: A Space Odyssey’, also known as 'Sprach Zarathustra' composed by Richard Strauss." (The sound design was created by  Ohad Naharin’s alter ego ,Maxim Waratt.)

Then, when Batsheva  hit “superman splits”, I felt an overwhelming sense of pleasure from the floor to the ceiling of BAM's orchestra. These recognizable physical and musical moments served as entry points to the more abstract world that Naharin and Batsheva held complete control over.

And it was "just" beautiful.

I go ‘gaga’ over Michelson’s work because of its' art house essence - like being a part of something that maybe I shouldn’t be watching: a David Lynch film, perhaps. Or,  like seeing a metaphor precariously set on the edge of a cliff.  Michelson's work, neon bright, reveals a gothic eroticism, and similar to Naharin, she doesn’t “perform” anything.

Naharin says in an interview with Evan Namerow of The Brooklyn Rail, “We’re barely aware the audience is watching—it’s like a Peeping Tom. We don’t show ourselves. We are viewers as much as the audience is."

The Michelson cast presents their bodies, wide and available; they show us their backsides; they push their toes into the ground, lifting their heels up as they circle backwards. I can see them breathing, sweating, thinking and resting with  simple uncooked sex appeal. I accept this with an exhale of appreciation.

As the dancers slowly and subtly tilt their heads upward and sideways to receive a sort of communion before resetting and repeating, a heavenly comeliness is reached.

Sarah Michelson is as addicting as getting my tattoos.*

On The Road with Raja: Unfamiliar Territory or more confessions for an emerging artist

On The Road With Raja-ImPulzTanz

Postcards: On The Road With Raja