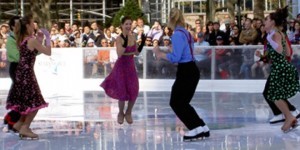 Ice Theatre of New York Preparing for Their 2008 Gala

What pops into your head when you hear the word,  "ice-skating" ? A young woman in a sparkly dress twirling so fast that she blurs? Couples, both young and old, leisurely lapping a frozen pond? A scene from the Radio City Christmas Spectacular? Tonya Harding and Nancy Kerrigan?

How about art? If you chanced upon the rink at Rockefeller Center on Wednesday, March 23rd around one p.m., your perceptions of ice-skating may have been broadened by the Ice Theatre of New York, which specializes in on-ice dances as well as educational outreach.

The thirty-minute program opens with Primavera: A Class Piece (choreographed by Elisa Angeli) for four women and two men. The sextet traces scallops across the ice as their arms sweep in elegant port de bras. Bursts of fervent virtuosity break the graceful unison: daredevil lifts, whipping spins, fiery dashes across the rink. The six radiate joy in this meditation on a ballet barre.

Beata Handra in Into the Light. Choreography by: Lorna Brown. Photo by: Darial Sneed.

Several solos spotlight the finesse and showmanship of the Ice Theatre of New York. In O Mio Babbino Caro (created by Douglas Webster), Sally Jeanne Watkins, shimmering in a carnation-colored dress, swoops, slides, and then kneels while her fingers graze the ice. Spunky Elladj Baldé, to a medley of Michael Jackson songs that he choreographed, evokes The Gloved One with chest pops and hip thrusts. He moonwalks, which is crazy cool on ice, and astonishes with an out-of-nowhere somersault. Beata Handra (composed by Lorna Brown) finds the intersection of modern dance and ice-skating during Into the Light. In between zooming to and fro, she reaches out her arms, yearning for something that or someone who remains just out of reach.

Hommage stirs the most emotion. Created by Florentine Houdiniere in tribute to the victims of the Paris terror attacks, four skaters in black tops and four in primary-colored ones stand at opposite ends of the rink. They connect into couples through ringing gestures that suggest an embrace. A black-clad woman screams; a yellow-shirted woman falls and is caught by the cast. The two quartets end as they began — apart.

Tourists, office workers, and the odd passerby cram around the perimeter. Most stay put for the entire performance, captivated by the many moods kindled: reverence, elation, melancholia. It’s one of those New York moments — a day, no different than the one before it, transforming into something singular thanks to a serendipitous encounter with art.