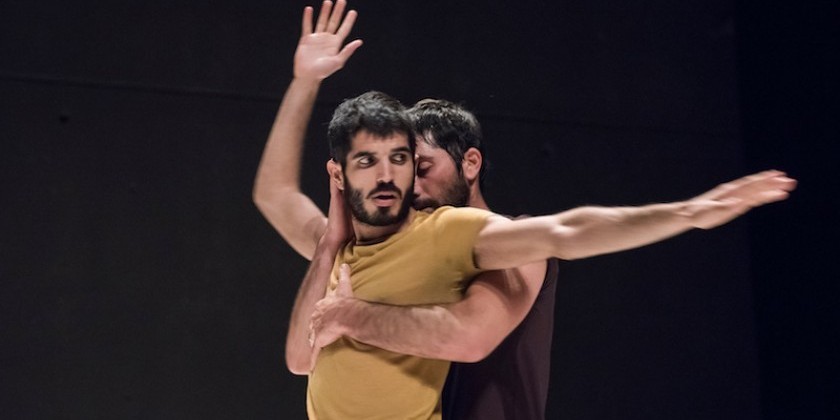 I have been covering contemporary dance from Israel for almost a decade, and I remain intrigued by its vibrancy. With a steady sprouting of new companies taking refreshing approaches to the choreographic process, the nation continues to redefine the creation of movement.

Roy Assaf is one of these new Israeli voices, and one that shows a clear interest in examining intimacy in human relationships. On October 12, 2017, his company Roy Assaf Dance made its New York premiere with the double-bill Six Years Later and The Hill at the Baryshnikov Arts Center.

Six Years Later unfolds as a duet between a man and women, but it could be about any romantic partnership tested over time. Set to music by Handel, Beethoven, and Marmalade, the piece takes the viewer on a journey, albeit a nonlinear one. Taken literally as the title suggests, the lovers could be revisiting their union after time apart.

Assaf and Hoke vividly display intimacy through their gestures. They encircle their fingers as they hold hands and press together their torsos to send visible vibrations back and forth through their spines. With her neck nestled in the nook of Assaf’s shoulder, her face settled against his chest, his back, and his hands, Hoke circles her head exquisitely, adding to the sense of closeness and affection.

A poignant moment occurs when the dancers, enveloped in each other’s arms, chest-to-chest, repeat a shared vibration. Each pushes the other in the same rhythm at least a dozen times; then, suddenly, Assaf stops responding. Hoke pushes and pushes to provoke a reaction, but he stands motionless. This moment implies the relationship’s restlessness and communicative failures.

A three-man trio, The Hill flaunts more virtuosic flair. Set to the folk songs of Yoram Taharlev, the piece was inspired by a real battle in Jerusalem during the Six-Day War. Brightly lit, the stage sets a scene of sunlight and desert. The muted costumes of t-shirts and chinos evoking military fatigues are in hues of dark grays, greens, and yellows.

Interconnectivity returns as a motif. Rarely physically separated, the men yank and shove one another. They link arms in folk dance phrases, grab hands during jumps and lifts, and throw each other around by the waist. The dancers — Assaf joined by Igal Furman and Avshalom Latucha — express their fraternal bond through “rough housing.” This group manifests as a unit, a band of brothers who support each other through excitement, exhaustion, and trauma.

Many elements in Assaf’s work are characteristic of the Israeli style: the raw physicality; the use of a deep, grounded plié; and the technical expertise. All of these have been honed by Gaga technique, which allows dancers to move their bodies from fingers to eyelashes. Although narratively abstract and driven by movement, Assaf’s works stand out for their moments of emotional delicacy. The glimmers of softness amidst the impressive athleticism offer glimpses into human frailty — rendering it refreshing and alive.