IMPRESSIONS OF: 10th Anniversary Celebration of Anabella Lenzu/DanceDrama at The Argentinean Consulate 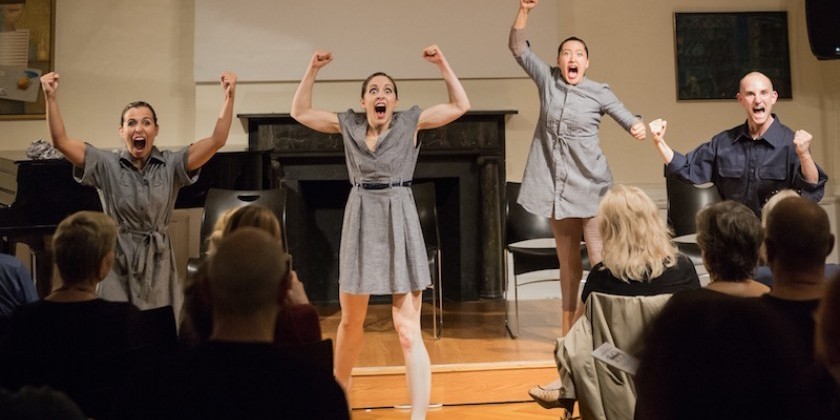 It’s rare to experience the full range of an artist’s repertoire in one sitting. Yet the one-night-only program celebrating Anabella Lenzu’s past decade of creation with her company, DanceDrama, does just that.

In an hour’s time, a tasting of the Argentinian choreographer’s work consumes the ad hoc performance space of the Argentinian Consulate. The setting feels right. Lenzu’s proclaimed nostalgia for her home country serves as a program through line, though not without nods to her Italian and American influences as well.

The retrospective begins with Lenzu alone. She pantomimes and abruptly shifts emotions in an unspoken dialogue with the empty chair at her side (excerpt of A Un Semejante from Che, Tango, 2001). Before long, we’re deep into our first taste of Pachamama (2013), which is ridden with character idiosyncrasies; one dancer makes sharp cries and growls as another succumbs to a grounded stance. You can feel the intensity of the other’s eyes staring at you, though her face is hidden. It’s couched in the realm of commedia dell’arte, complete with masks by Jennifer Johanos. 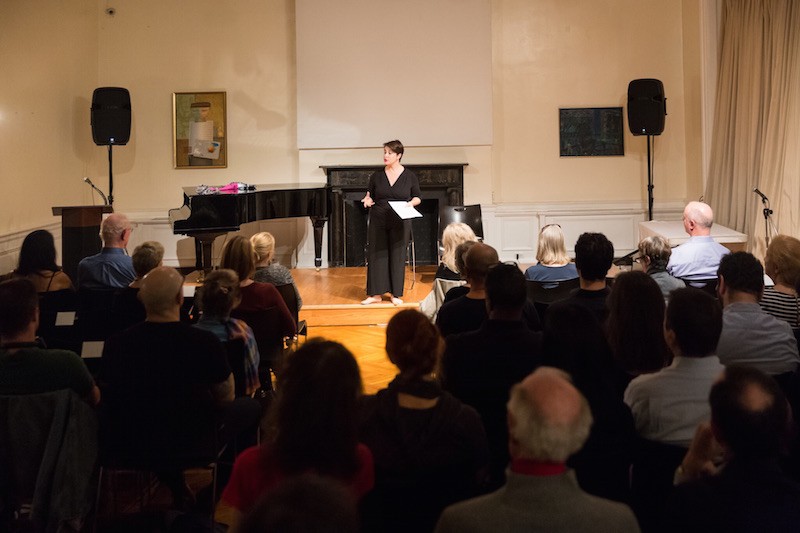 The drama facet of DanceDrama is perhaps best represented in the excerpts of Ilusiones de Percantas (Women’s Dreams) from 2007 where the contrast of a prostitute with a virgin allows for comical and caricatured movement, acting, and even singing. It also marks dancer Dina Denis’ standout moment, as she embodies the brash and sultry persona of her character. Not all the excerpts of the program are as visually or physically assertive, however. Lenzu shares another solo (from The Grass is Always Greener, 2010) that is muted in comparison. She stands and then slowly winds and unwinds fabric from her arms while reciting Gabriela Mistral’s poetry. It’s powerful in its simplicity.

A handful of the works welcome projections, which — in keeping with the intimacy of the performance — are displayed by Lenzu, who’s seated on the floor with a hand projector. Before “Indulto” (from The Corral, 2009), Lenzu says, “I ask myself, which country is my home? The country in which I was born? Or the country that nourishes me now?” Todd Carroll’s photo projections for this tap into this sentiment in an effective, albeit literal, manner. 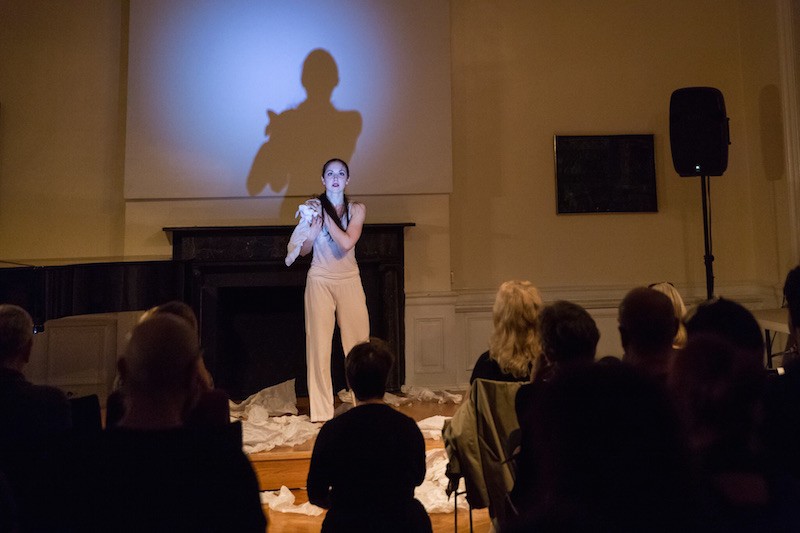 Despite the quantity of works highlighted, the program doesn’t read like an assortment of diverse vignettes cobbled together. Rather, it’s the consistency of Lenzu’s singular and distinct artistic voice that prevails. Of “Gol” (an excerpt from The Corral, 2009), Lenzu notes, “It’s an explosion, because I don’t believe in a slow simmer.” This statement, however, aptly captures the essence of Lenzu’s style at large. In domino-effect fashion, we experience one “explosion” after the next with all 14 excerpts presented. Each time her choreography’s dynamism is fueled by a revolving door of intensity, self-awareness, melodrama, and/or ritual. This holds true whether the movement is more theatric-based, modern, folk-inspired, or a fusion of many forms.

The apex comes with an excerpt from Sangre Y Arena (2012). Here, long-time company member Lauren Ohmer delivers an arresting and primal performance to Geoff Gersh’s soundscape of relentless chimes and wind. It’s a picture of anguish: Red paint (blood) is slung, a mess is made, and a sense of discomfort fills the room. By the program’s end, it’s as if we’ve concluded some sort of ceremonial gathering, colored by different beings and memories throughout.