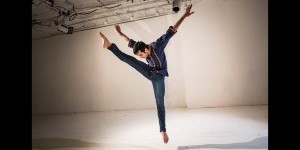 Astrid Von Ussar has been presenting choreographers of all levels through her Dance Gallery Festival since 2007. Each year, a few of these artists are voted audience favorites and awarded a $1000 fee plus a commission to create 25 minutes of work. 2016’s commission recipients Dionne Sparkman Noble and Andy Noble, Rohan Bhargava, and Nicole Von Arx premiered their pieces to great applause on November 4th at the Ailey Citigroup Theater in a show of concepts that lacked development.

The Nobles, both professors of dance at Sam Houston University in Texas, open the concert with Evelyn Toh undulating before a video camera that projects her time-delayed avatars onto an upstage screen. Where one looks in Fragment, whether at Toh or her afterimages, makes little difference. There is no relationship between her meandering, somatic movement, or its projections. The video element is abandoned as Wesley Cordova takes the stage to swing Toh overhead, and hover over her as she slides beneath him. They spend the dance facing front, expressionless, oblivious to the ambient noise playing around them — two peas in separate pods who just “happen” to occasionally touch.

Following a set change, the Nobles present Ziggurat, a piece of repertory. This gimmicky exercise features 11 new dancers balancing atop a helicopter-like prop that would not look out of place in a Cirque du Soleil production. Though it evolves into a juggernaut of slapped-together canons and slick solos, Ziggurat amounts to nothing more than running around in circles.

Bhargava, a charming choreographer of genre-blending scope, can usually be relied upon to expand his viewer’s expectations with rhythmically sophisticated sequences that tickle the eye. In this work however, his palette is decidedly limited. It shimmies and bops into poses evocative of a street-dancing drumline, only marking time to a “one-and-a-two” metronome. While Kool Kids 2.0 is easily accessible and fun for some, it lacks the wit one has come to expect from this creator.

Nicole Von Arx closes the evening with a murmur of repeated movement phrases and rhythmless sounds arranged by Legomec. During Le Mass, five dancers shamble about with bad posture as subtle tics descend through their frames, until they arbitrarily shift into yoga poses — including a headstand. Arx’s movement vocabulary resembles cinematic mumblecore chock-full of barely heard utterances that lack distinction. During one brief moment, as two men begin to prance back and forth while swishing their hips, it seems as if Arx might have something to say about gender roles. But the seeming is fleeting.

Dance Gallery Festival is an admirable presentation platform for contemporary dance, but to affect lasting change within the field the group must do more than commission and produce work. One hopes that next year's commission designates will receive choreographic mentorship, as well as cash, so as to avoid the pratfalls that tripped this year's batch.

The Dance Enthusiast Shares IMPRESSIONS/ our brand of review and Creates Conversation.
For more IMPRESSIONS, click here, including our review of Rohan Bhargava’s spring 2017 program.
Share your #AudienceReview of this show or others for a chance to win a prize.