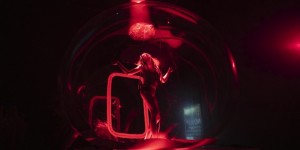 IMPRESSIONS: David Thomson's "he his own mythical beast" as part of COIL Festival at Performance Space New York

David Thomson describes he his own mythical beast as the culmination of “several iterative installations and performances that began in 2012.” Reduced to its most essential parts yet far from simple, the work is a stunning testament to what can be achieved when sustained effort and research go into a project.

The work unfolds in a long, narrow black box at the new Performance Space New York, with the audience sitting on three sides. In creating a sense of distance from one side of the room to another, Thomson enables distinct scenes to take place simultaneously yet remain in dialogue. A quartet of performers takes turns carrying a bright work-light to illuminate certain vignettes, such as when Jodi Bender shoves and drags Paul Hamilton around the room. Later, Thomson almost disappears into darkness as action takes place elsewhere in the room; only the audience closest to him sees that he's still moving until the lights come back up.

David Thomson and Paul Hamilton; he his own mythical beast at Performance Space New York as part of Coil 2018; Photos by Maria Baranova

Often, the dancers work in duets: Thomson with Hamilton, Bender with Katrina Reid. The split feels more about age than gender or assigned sex. The men are older, and their interactions expose a surprising playfulness that may be derived from survival. When Hamilton gives a firm, predatory shake to the back of Thomson's neck, the gesture hints at potential violence, or at least dominance, yet they look at each other and chuckle. Another time, they sit and discuss the harassment Thomson experienced at a party: A man tried to grab him on the way to the bathroom. “And was he [the perpetrator] white?” asks Hamilton. The question is posed for dramatic effect (of course he was) but also to excavate the truth.

A kind of inverse erasure can happen in postmodern dance, which Thomson describes as a performance aesthetic that “historically privileged neutrality as a means of subverting the personal narrative.” People are valued as individuals, as long as their differences don't show. The declaration of neutrality by white artists, though, can lack meaning, especially if those artists aren't deeply committed to an anti-racist and anti-oppression framework. Without such a framework, neutrality just means white (or male, or cisgendered — whatever the normalizing set of values may be).

In the beginning of mythical beast Thomson moves gracefully through a series of formal shapes until he's sweating with exertion. His clarity and focus make it obvious that a dancemaker would be lucky to work with him. But as he moves, he narrates a story about a choreographer who continually found fault with him — until he finally realized it wasn't the way he performed the movement that was a problem. It was him. His personhood was showing through the “neutrality” of the choreography and it bothered the choreographer — and his personhood and his blackness are inextricable.

Humor points out hypocrisies: Reid and Thomson tell a story about an Apple spokesperson's insistence that Siri doesn't have a white voice. The voice is race-neutral, Apple explains and was preferred during Siri's research phase. Reid wonders how much “blackness” can creep into a voice before it stops sounding neutral. How “black” can a Black person be before white people feel uncomfortable?

David Thomson and Paul Hamilton; he his own mythical beast at Performance Space New York as part of Coil 2018; Photos by Maria Baranova

And what about the reverse? How white is too white to claim a relationship to Black culture? Bender (the only white-appearing dancer of the four) initially seems to occupy an aggressive role as she drags Hamilton around earlier in the piece. Later, though, she talks about a grandparent who was indeed Black but lived his whole life in silence. Within white U.S. culture and its obsession with drops of blood, percentages, and race, Bender occupies a difficult space at the intersection of disbelief and denial. Her perceived whiteness, though it might isolate her, also protects her. Toward the end of mythical beast, she and Reid trace chalk circles around Hamilton as he rolls across the floor. They leave jagged outlines of a body, overlapping each time he rolls, resulting in contour lines like on a topographic map. Reid and Bender, whose bodies and personhoods suffer their own assaults and violence, are still the record-keepers for fallen Black men.

David Thomson; he his own mythical beast at Performance Space New York as part of Coil 2018; Photos by Maria Baranova

The code-switching necessary to navigate questions of appropriate blackness prompted Thomson to create the character Venus, inspired by Sarah Baartman, an enslaved woman who was displayed as an anthropological curiosity in the 1800s. As Venus, Thomson wears a simple white dress that swirls and floats. Later, he adds an unsettling gimp mask. The cutouts around the mouth and eyes contrast Thomson's dark skin with the black rubber of the mask to create a blackface effect — a Black man performing the appropriate amount of blackness, tinged with implied submission and humiliation. At this point, Thomson's true self, his personal narrative, is so obscured and refracted it's astonishing to hear that his mellifluous speaking voice remains unchanged.

Katrina Reid, Paul Hamilton, and Jodi Bender; he his own mythical beast at Performance Space New York as part of Coil 2018; Photos by Maria Baranova

The myth in mythical beast comes at the end when Thomson merges with the conjured power of Venus. Still wearing the dress and mask, he slips on black stilettos, twisting, dipping, and gyrating around the room, radiating barely contained energy. The movement is celebratory, but it's also a challenge. Venus, the mythical beast, might blind anyone who looks at her too closely. Thomson has created a movement incantation that embodies his complex identity, free from and informed by the restrictions of white “neutrality.”