Impressions of: Faye Driscoll's "Thank You For Coming: Play" at BAM as part of the Next Wave Festival

Choreography and Text: Faye Driscoll, in collaboration with the performers

Upon entering BAM Fisher, one thing is apparent: Audiences love Faye Driscoll. Not only is the final show entirely sold out, a long line stretches across the lobby of stand-by hopefuls. This makes sense, considering the audience plays a vital role in Driscoll’s work. Thank you for Coming: Play is the second in a proposed three-work installment that investigates the reality sculpted by the audience and performer.

As we enter the theater, we are funneled toward the stage, where a flamboyant assortment of costume-y clothing lays on white platforms — as though someone took David Bowie’s closet and made a museum of it. We are prompted to write an [removed]of joy, surprise, anguish, anything) on a tiny white piece of paper with a golf pencil. The performers chant our sentiments, which becomes music. We are part of the piece. 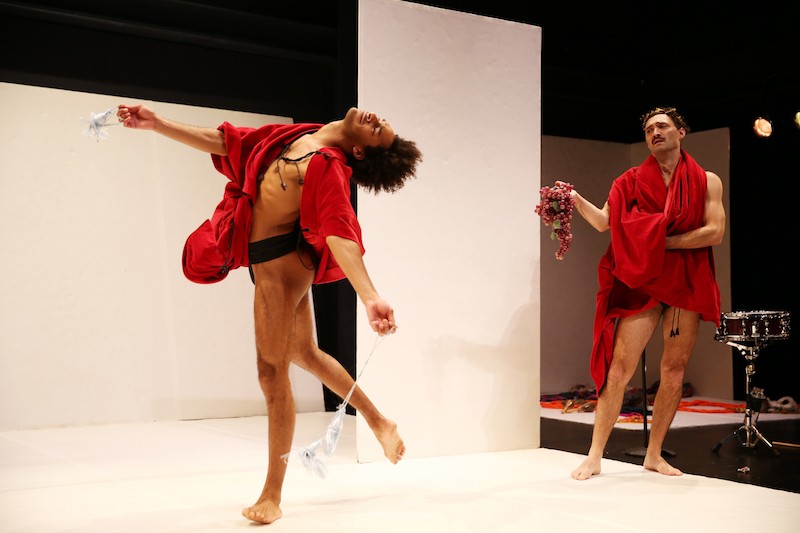 The entire first half unfolds like one big game of dress-up. Three men and two women dance and act out a long, barely-decipherable story about the coming-of-age of a child who is, perhaps, an amalgamation of all of the cast. They frantically change costumes and personalities. They distort their faces and speak in animated voices, accessing an unfiltered, childlike creativity. Reality is shuffled and distorted as the stage explodes with frenetic energy. This saga doesn’t make sense. It isn’t supposed to make sense. The infusion of our own experiences makes the plot comes to life — no matter how abstract, we can all relate to a story about chasing our dreams and encountering obstacles along the way.

Clad in black, Driscoll serves as both stagehand and emcee. She shifts and rearranges pieces of the set while acting as the puppeteer, pulling strings behind the scenes to control the action onstage.

Bobby McElver’s ambient sound design blends with vocal contributions from the performers. He sits side stage and plays the drums, but occasionally gets dragged out onto stage — no one is exempt from participation. Words turn into songs when intoned over and over. At one point, Driscoll rallies us to chant about anxiety. 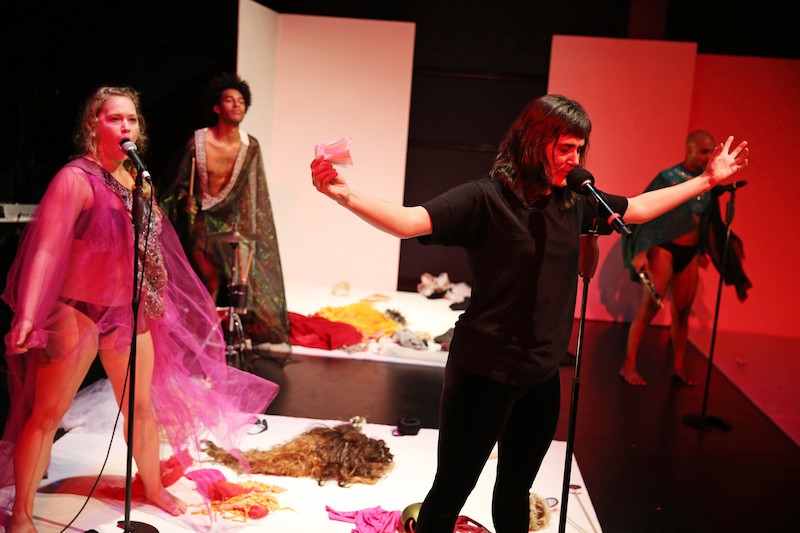 After this extravagant play within a play, the performers return to their real-life selves. They wear rehearsal clothes and speak casually, as if chatting during a lunch break. Their conversation becomes repetitive, disjointed, sometimes muted, like watching a TV with spotty sound. Play’s relevance lies in its missing puzzle pieces, the holes we infuse with our personal experiences.

Play asks us if we become someone else when we perform? Or are we an even more vibrant version of ourselves? Do we perform in our day-to-day lives? When are we most true to our self?

About halfway through Play, Driscoll takes center stage for the first time to scream a punk-rock anthem denouncing the President-elect (who never gets named). Her bitter song disintegrates into chilling sobs, a visceral response to something completely out of her control.

The unbounded emotion of Play feels relatable, vibrant, even fresh. It also can feel like a child throwing a temper tantrum with plenty of energy and passion but no clear purpose. While the spectacle is entertaining, an adult mind might crave more organized substance.

The Dance Enthusiast Shares IMPRESSIONS/ our brand of review, and Creates Conversation.
Check out an Impression of an early Faye Driscoll piece and our other IMPRESSIONS here.
Share your #AudienceReview of this show or others for a chance to win our December prize a $75 dollar Trader Joe Gift Card