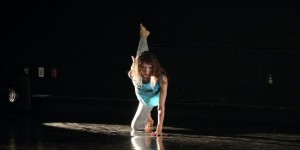 In the wake of the 2017 presidential inauguration, Kotze asked herself how to be ready instead of getting ready. Already Ready, created in collaboration with the dancers, explores the impulse of being prepared.

The dancers dart with heavy footfalls. They survey the space and make eye contact with the audience. A loud pop activates sound, and the quintet bursts into elongated swoops and quick, punctuated motions. They spill in and out of the corners, taking turns responding to the room’s architecture and negotiating around chairs.

The audience surrounds all four sides of the performance area. Depending on where you sit, solo moments emerge. You choose what to watch, and you keep track of when and where someone disappears out of your line of sight. Even if you miss the full picture, you trust you’ve received enough visual data to have an informed viewing experience.

The rigor of watching parallels the rigor of movement. The dancers’ energy bubbles like carbonated liquid. Their proximity radiates a readiness, and their faces suggest camaraderie. We’re in it together.

Audience seating is re-configured to one side for Wilson’s config. Khoum-baye Heah. Campbell, Cruz, and Welch leisurely stroll into the space. Oshiro crawls and Miller logrolls. The air is calm, the music low. The costumes, designed by Naoko Nagata, evoke rural nostalgia with variations of denim, gingham, and animal print.

The work unfolds as a series of motifs extracted from Wilson’s signature works: PANG, The DEW WET, and Big Brick-A Mans Piece. Every section occurs more than once, and each abruptly ends or begins with a change in the music, which is a medley of Papa Wemba, Fist and Heel Performance Group, The Andrews Sisters, Thione Seck, and DJ K Blaze.

The company tries on Wilson’s movement vocabulary of tilted pelvises, soft knees, and syncopated foot rhythms. The movement looks foreign on their bodies, but in each recurrence, the gestures settle more into their muscles and joints.

During one scene, Miller repeats a phrase carving out a half-circle pathway, which contains the quartet in the upstage right corner. They face the back, but periodically peel away from their positions and return again. On relevé, Oshiro and Cruz rest their heads in the crook of Welch and Campbell’s shoulders and suspend like a pendulum. This moment foreshadows the physical tenacity and exhaustion to follow.

Virtuosic fatigue complements their delivery and pushes repetition to the forefront. Moments happen simultaneously, and you must choose what to observe. The repetition invites you to look differently each time or refer back to dissipated moments. This heightens our awareness and encourages new perspectives. Together, dancers and audience compose a complete picture.

The work ends with Miller and Welch head to head on their elbows in plank. They roll counter clockwise, gradually increasing speed and intensity. The remaining three onlookers anchor the duet’s momentum while sinking into the shadows upstage. What a perfect metaphor for life. Sometimes we’re simply witnesses, and other times, we find ourselves spiraling in and out of control.

The Dance Enthusiast Shares IMPRESSIONS/ our brand of review and Creates Conversation.
Check out our other IMPRESSIONS here, including a 2016 review of Reggie Wilson's Fist and Heel Performance Group
Share your #AudienceReview of this show or others for a chance to win a $75 giftcard to Trader Joe's.