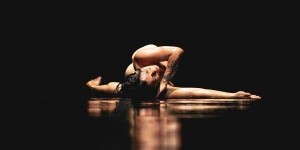 Jaamil Olawale Kosoko and an ensemble of mediums conjure up Black spirits (both living and dead) in Séancers, which received its world premiere in 2017. It returns to Abrons Arts Center as part of American Realness 2018. This nonlinear work invites audiences to witness the opulence of Black imagination through movement, lyrical poetry, and the embodiment of Black feminist writers Audre Lorde, Ruby Sales, Howardena Pindell, and Brenda Dixon-Gottschild.

Composer M. Lamar provides piano accompaniment as folks enter the room, the ominous, operatic wails and rumbling chords generating an uneasy suspense. Above and behind the audience, Jeremy Toussaint-Baptiste stands bare chested behind a metallic altar. A Black babydoll, who we will come to know as Tay-Tay, sits on a cloud of white tulle that frames the altar.

Wearing a black-and-white indigenous-print one piece, dramatic cape, and diva heels, Kosoko sashays through the audience offering Hershey kisses. He entrusts a female volunteer to take care of Tay-Tay. “Don’t leave him on the floor when you go. Give him back to me,” he instructs.

M. Lamar wanders into the audience and talks about indignation, gratitude, gender studies, identity spaces, and whiteness. Kosoko lounges on the floor listening. He sinks into his hip and nods with acknowledgment, slowly transcribing M. Lamar’s words from the intellectual into the physical.

Kosoko’s recitation of Audre Lorde’s Power echos through a deep-voice modulator. He then transports himself upstage and transforms into a creature composed of gold metallic strips that bubble and swish back and forth as it zig-zags closer to us. It leaves traces of material in its wake before morphing into the magnificent wings of a Black angel. His arms manipulate the strips to rise in an arc and cascade to the floor.

Kosoko surrenders to an empty chair at the table and caresses the back of his cheek with his satin-gloved hand. He fills his cup from the kettle and pours steaming liquid into the other cup. Liquid splashes and puddles onto the floor. The teacup and saucer violently clank in Kosoko’s shaking hand as he stirs their contents. This shaking travels through his entire body, summoning a memory of the movie Get Out where Black bodies are hijacked for white immortality.

Séancers continues to shift from one moment to the next, giving multiple spirits a vessel to be heard. For instance, Kosoko wears a white nightgown that turns him into a floating apparition. It confesses, “I tried my whole ass life to be good.” During one of the most striking moments, Kosoko applies a nylon mask of a white woman with blonde hair on backward while music from the movie Halloween plays in the background. She convulses and thrashes wildly, getting tangled in the material on the floor. Her body disappears underneath an orgy of blonde wigs, rope, metallic strips, a blowup doll, a plastic horse head, and more.

Séancers invokes thoughtful feminine energy dislodging the intellectual into the physical. It opens a dimension between the unapologetically messy and the legible. Kosoko calls on Black spirits, and inhabits multi-gender forms to unearth our responsibility and cosmic connection to the Black dead and dying. The wronged and the strong are resurrected, activating a portal to heartache but also joy.

The Dance Enthusiast Shares IMPRESSIONS/ our brand of review and Creates Conversation.
For more IMPRESSIONS, click here, and for another review of Kosoko, click here.
Share your #AudienceReview of performances for a chance to win a prize.