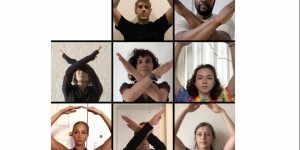 Jody Oberfelder's "X and O" — A Short Film about Seeking Connection On and Off the Grid, Tic-Tac-Toe Style

Once upon a time in Germany, a budding Jewish composer by the name of Kurt Weill premiered Zaubernacht (Magic Night) with writer/theater impresario Wladimir Boritsch. Boritsch journeyed to America three years later, in 1925, bringing their pantomime ballet to the New York City stage. After this, the Zaubernacht score was lost, its tale presumed complete. Life went on. Weill gained fame through his collaborations with Bertolt Brecht — most notably, The Threepenny Opera — and continued his musical pursuits in America long after fleeing Nazi Germany in 1933.

Then, in 2006, Zaubernacht’s original orchestrations were uncovered in a Yale University library safe. With this discovery came the opportunity for artists to marry the vintage score with modern-day sensibilities, a task happily accepted by Jody Oberfelder Projects and the Knickerbocker Chamber Orchestra (KCO). Their collaboration brings this nearly forgotten soundscape and magical story back to the New York City stage after 92 years.

You can’t help but nestle Zaubernacht alongside the likes of Bayer and Hassreiter’s Die Puppenfee (The Fairy Doll) (1888) and Tchaikovsky’s The Nutcracker (1892), both of which continue to attract audiences to this day. In each of these fairy tales, magic prevails, toys come alive, and dreamlike adventures ensue. The stories also fulfill a timeless desire, an escape from reality. At the time of Zaubernacht’s 1922 premiere in Germany, Weill, Boritsch, and audiences shared the reality of living in the devastating aftermath of World War I.

Weill’s score washes over us with ease. Full of whimsy, yet simple at its core, the music is laced together with darting and earnest stylistic explorations. Just as an ominous melody brews, its sense of urgency is layered with an unexpectedly airy, sweet tune. It makes for harmonies as fantastical as the story itself. KCO Music Director Gary S. Fagin conducts the nine-piece chamber ensemble and soprano Hai-Ting Chinn bookends the hour-long performance. They beautifully deliver this time capsule of Weill’s wide-eyed wonder.

Weill’s music is met by the curious mind of Jody Oberfelder, wearer of many an artistic hat. Her directorial approach to this fairy tale escape embraces themes unique to 2018. She abandons the traditional team of only toys in favor of curated personas ripped from our headlines. Over twenty characters (some toys, some people, and some metaphors) come to life in “snackable” vignettes. They nimbly shift in and out of the spotlight, beholden to the score.

Various scenes featuring pink Barbie duos, slinking mounds of “sludge,” or bumbling soldiers heighten the theatric face value and stay true to the family-friendly, pantomime ballet Weill and Boritsch intended. The timely episodes, however, add significant depth. A Pussy Hat Brigade scurries from the wings to confront the witch of “Hansel and Gretel” and barrage her with tickles in a hilarious scene. But the poignancy is not lost; images of recent rallies and Women’s Marches flood the mind. A Trump-esque giant interjects time and again. He is ultimately exposed as a fraud, a mere man on stilts. A Troll — an ode to the Harvey Weinstein’s of the world — meets his match in the Child, our young feminist protagonist, played by the charming 11-year-old Lyla Forest Butler.

I especially covet the in-between moments where Oberfelder’s movement fights its way to the forefront to tell the stories deeper than fairy tale. The Giant (in stilts) partners the evil witch, together balancing the world — a beach ball globe. A sludge-like creature looks down from atop a ladder at a collective of marching prisoners, grasping upwards to no avail. The Child engages the Troll in a scuffle-like duet where she discovers her own (literal) strength. These dances brim with metaphor and Oberfelder’s creative stamp, lending Weill’s music the hallmark of today.

The Dance Enthusiast Shares IMPRESSIONS/ our brand of review and Creates Conversation.
For more IMPRESSIONS, click here, and read about Jody Oberfelder's earlier work, The Brain Piece, here.
Share your #AudienceReview of performances for a chance to win a prize. 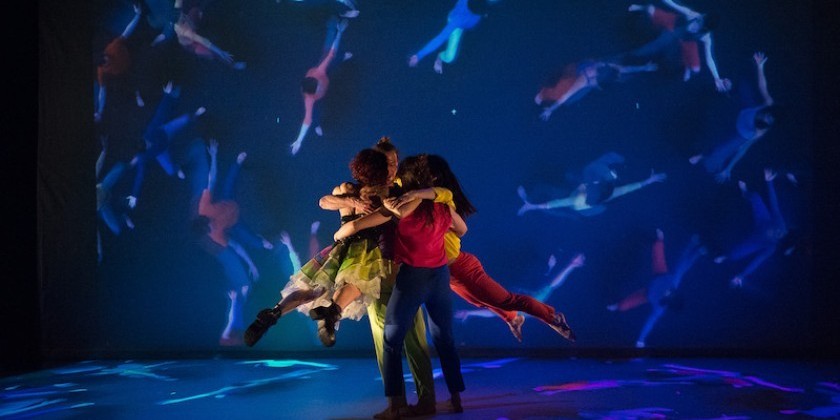