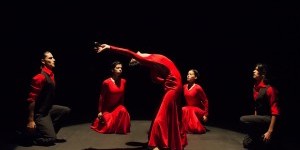 Co-presented by BAM and The Joyce Theater

If your idea of dance in Cuba is a scene from Dirty Dancing 2: Havana Nights — smoky club, steamy moves — think again. Contemporary concert dance is not only alive there; it is thriving.

From ballerinas to baseball players, Cuba excels at cultivating physical talent. The eleven members of Malpaso Dance Company, formed in 2012, are no exception. Coolly agile, casually charming, they boast technique so solid that their dancing looks like child’s play.

The company, co-presented by BAM and The Joyce Theater, makes its BAM debut with the one-hour Dreaming of Lions. Dedicated to Ron Feiner, a Havana aficionado and supporter of Malpaso Dance Company, the work unfolds over a dozen-plus episodes. It follows choreographer and performer Osnel Delgado (he’s also the company’s artistic director) in a journey of self-reflection inspired by Ernest Hemingway’s The Old Man and the Sea.

The winsome Delgado befriends firecracker Michel Avalo, flirts with a few women, and writhes alongside a mass of gray jump-suited bodies during his attempt to catch one last big fish. He totes a box, a stand in for the old man’s boat in the novel, on which he spends long sections sitting or standing or sleeping. At the end, he recreates the rippling gestures of his opening solo (with his box, of course) but oriented in a new direction — home but as a changed man.

Or maybe not. The narrative is puzzling and, at times, abandoned altogether. Multiple duets occur for no purpose beyond showing off the performers’ prowess, and the most poignant relationship transpires between Delgado and his box.

Fortunately, the choreography offers a through-line when the story fails. The dancers drip and spill and smear themselves across the stage as if their bodies were made of ink. Although scorching barrel rolls and dizzying pirouettes embellish the snaky floor work, the tempo stays annoyingly sedate.

This wouldn’t be a problem if not for the sizzling score, which is played live by Arturo O’Farrill & the Afro Latin Jazz Ensemble. Composer and conductor O’Farrill has created a multi-textured stew of mellow polyrhythms and bright harmonies that goes down as easily as a mojito. The music shows more dynamic pacing — often much more — than the choreography, and it can feel like you’re watching one piece while listening to another.

It’s this dissonance — at first, a little and then a lot — that sinks Dreaming of Lions. Good music shouldn’t overwhelm great dancing.