Impressions of: The Median Movement’s “for North” at Center for Performance Research 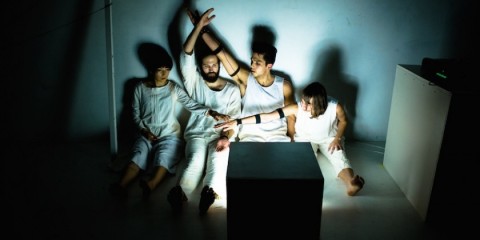 Choreography: Xan Burley + Alex Springer in collaboration with the performers

No lights come up and no places are taken when The Median Movement’s for North begins. Carving through CPR’s white box like Pac-Man, four dancers clad in white linen appear nonplussed by the audience, who are wrestling with their winter gear and settling into the bleacher seating. The performers fixate their gazes out ahead of them. Co-choreographer Xan Burley’s, in particular, transfixes, sending a shiver down one’s spine. What are they seeing? More aptly, what are they looking for?

Two white illuminated cubes sit onstage, punctured with a skinny pole that sticks straight up like Sir Arthur’s sword in the stone. A table with sound technology rests in an upstage corner where occasionally a performer goes to prod and press the shiny buttons. The only things that aren’t white in this Arctic landscape are black strings that attach to the poles and black velcro armbands with wireless microphones worn by the dancers. 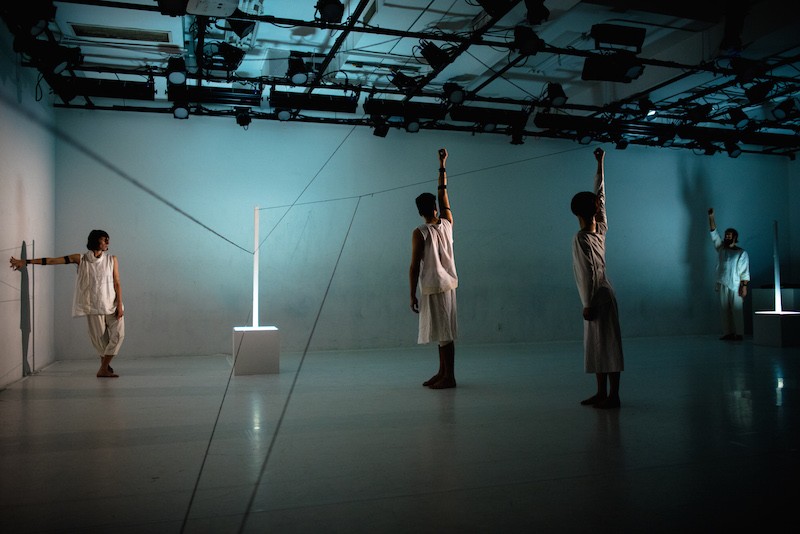 Sometimes scenic and sound elements can overwhelm the actual dance. In this piece, however, the coalescence of these components is striking. Co-choreographer Alex Springer, a woodsman clearing brush, crisply slices his arms as whooshes, like a sail in the wind, emit. This is due to an effect Will Owens set up on his looping pad that projects the sounds the dancers make via their mics, producing reverberations and echoes.

Springer and Burley’s work doesn’t follow a narrative nor is it strictly abstract. Instead, the set’s architecture and sound score inform its trajectory. Moving quickly from one world and into another, for North conjures rich imagery at a rapid fire pace. In one moment, Springer rests his face against a taut black string and pluckes it like dental floss. The sound of water drips is in time with his tiny gestures. In another, the group appears to be on a vast frozen lake. Their bodies glide across the space as crackling ice rings out. Later, the quartet gravitates to the back wall and slides to floor. Sitting shoulder to shoulder, they stare into the cube’s optic brightness — couch potatoes engrossed by the tube.

While these moments are stirring, their poignancy begins to dull. The dancers seem stuck in their self-created loop until they snap to attention in response to a sound resembling a helicopter. Looking up to the skinny sticks, they remove them from their affixed place in the cubes and hang them from hooks on the ceiling. One by one, the performers leave, with no fanfare or resistance. Perhaps what they were looking for was found after all.

A Day In the Life with Doug Varone and Dancers