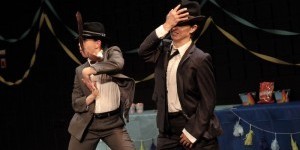 Impressions: Monica Bill Barnes & Company's "One Night Only (running as long as we can)" 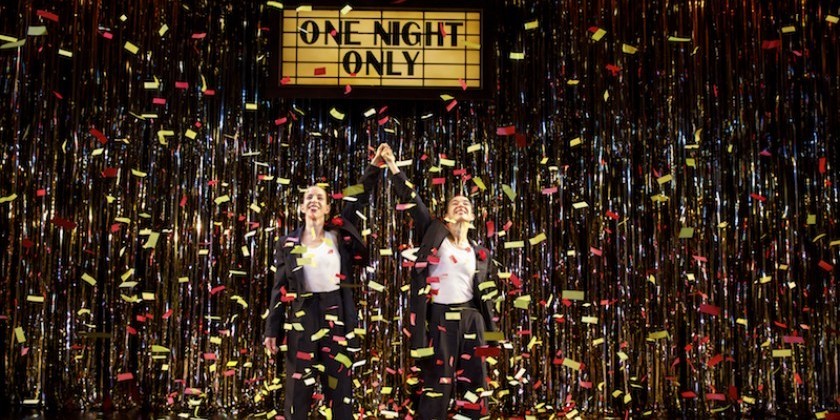 While it may seem that sports fans and dance aficionados are two distinct audiences, Monica Bill Barnes finds the overlap. The modern dance deviant’s latest, One Night Only (running as long as we can), imposes the practices and rituals of a sporting event onto a modern dance performance. On the surface, treating a modern dance show like a baseball game is witty and amusing. But the work outlives superficial gimmicks by re-examining the ways in which we witness dance and exposing the trials and joys of a life reliant on the physical body. Perhaps, dance and sports aren’t quite so different.

Upon entering WP Theater, an off-Broadway space on the Upper West Side, we are immediately inside of the show. Robert Saenz de Viteri plays the role of the “announcer,” creating a camaraderie that makes it feel like we're all hanging out in the bleachers. He offers boxes of Cracker Jacks to anyone who will own up to being a current or former “athlete” — an interesting question for a room full of dancers.

The curtain opens to reveal Barnes and Anna Bass, fiercely focused, striding in perfect unison on adjacent treadmills. They pass a tube of lipstick between them, spritz hairspray, and adorn extravagant feathered headdresses — they are ready for action.

Barnes and Bass, introduced by Saenz de Viteri as if he were calling boxers into the ring, are simultaneously competing against one another and on the same team. They swap timing the other’s performance of a movement phrase while rallying the person to go faster.

Robert Saenz de Viteri in One Night Only (running as long as we can); Photo: Joan Marcus

One Night Only seems to be, for Barnes, both autobiographical and universal. Though one wouldn’t know it from her performance, her 44-year-old body must feel some pain from the strains of a 20-plus-year career.

Saenz de Viteri relates a tale of an aging hockey player who refuses to retire, despite the fact no one wants him on his team. The story begs the question: Is there a place for older bodies in worlds that value youth and physical vitality?

In structuring the piece like a sporting event, Barnes breaks down long-ingrained practices of watching dance. Why can’t we cheer when the performers do something exciting? Why don’t we get a seventh inning stretch break?

One Night Only comments on the traditional “Broadway run,” which packs ten performances in a week, all aimed toward a standard of uniformity. Here, improvisation with the audience suggests the energy and unpredictability of a baseball game where the transience of a real-time moment will never be precisely recreated.

There are moments of disappointment. In the “spinning competition” portion of the performance, the women fail to beat their record of 108 spins — Barnes gets nauseous and has to forfeit. These are offset by moments of victory. As the dramatic string music reaches an operatic high, the women don their headdresses and jog in unison, snow whirling around them.

Monica Bill Barnes and Anna Bass in One Night Only (running as long as we can); Photo: Joan Marcus

Then, there is a touching moment that stands out against the humor. A woman from the audience is selected to read aloud a staggering list of Barnes' and Bass' injuries, starting from childhood. In listening to this list, which soon feels overwhelming, we realize how much history is contained inside these bodies. This information accumulated over a lifetime makes their movement, perhaps not as athletic as it once was, that much richer.

As the clock counts down the final minutes of the show, the women are challenged to try their spins one more time for the record. In a moment that feels akin to the Cubs’ recent World Series victory (they won in the 10th inning of game 7 after a rain delay), they break their record just in the nick of time. For those of us who struggle to relate to the sports world, perhaps there is a point of connection in the creation of an emotional narrative carried through by a series of otherwise meaningless movements.

If One Night Only asks: “Is there a place in the world of physical performance for an older body?”, then the answer is an astounding “yes!” Barnes’ work — and seemingly her physical stamina as well — is timeless.

The Dance Enthusiast Shares IMPRESSIONS/ our brand of review and Creates Conversation.
For more IMPRESSIONS, click here. To read our interview with MBB & Co., click here.

Share your #AudienceReview of this show or others for a chance to win a prize.

THE MUSEUM WORKOUT at The Metropolitan Museum of Art