You’ve never seen The Joyce Theater look like this.

Don’t worry, the laughably hideous white, black, and gray carpet is still entrenched downstairs, and it remains impossible to open the door to the ladies’ room without hitting someone.

What’s changed is the viewing experience. For two weeks, The Joyce has transformed its theater into something new, something interesting. Under curator Lar Lubovitch’s watchful eye, a white slab of a dance floor, a little like an ice floe, rests in the theater’s center, covering both stage and seating. The audience parks themselves in a loose square on risers at the rear of the stage or in rows toward the back of the house.  Where you sit will affect what you see, and that’s the point.

Titled NY Quadrille (after the square dance typically performed by four couples), Lubovitch invites a quartet of established choreographers to present work. While these dance-makers observe traditional theatrical spectacle with music, lighting design, costumes, and physical virtuosity, they offer sensibilities that extend far beyond the moniker of choreographer. Pam Tanowitz is the architect; RoseAnne Spradlin, the mythologist. Tere O’Connor is the philosopher; Loni Landon, the populist.

Blink. That’s what you’ll do when confronted with Pam Tanowitz’s Sequenzas in Quadrilles for six dancers. A formalist, Tanowitz works in a palette of high contrast. There’s silence, often, or there’s sound, occasionally, from members of The Knights, stationed in the balcony’s four corners. There’re lines, slashing grand battements and slicing gestures, or there’re curves, rounded attitudes and whorled port de bras. There’s motion, rabid stomps and whip-fast soutenus, or there’s stillness, poignant gazes and rock-solid balances. Occasionally, a woman in white, perhaps a 21st-century sylph, darts through the commotion.

Tanowitz has good ideas, in this case, too many. Between the bright quadrangles flashing on the floor and the crayon-colored unitards sported by the performers, between the geometric choreography and the squirts of buzzy violin or mellifluous harp, Sequenzas in Quadrilles feels over-choreographed, too garish, where the parts are greater than the whole.

Smack. That’s the sound RoseAnne Spradlin’s X makes when it sucker punches you in the gut. X features a post-apocalyptic dreamscape using the most minimal of resources: a quartet of beat-up ballet barres, three movement warriors (the word dancers seems too quaint for this ferocious trio), and one astonishing sound design of gunshots, churchy melodies, and distorted disco by Glen Fogel. Spradlin forges brutal imagery that evokes the Sisyphean nature of war and disaster. The threesome aims imaginary guns, one slings another on his back, and they sweep over, under, and across the ballet barres. They wrestle and they grapple and they thrash and they dash. Over and over, again and again.

Repetition is a blunt instrument. When used dexterously, it can embed motifs into memory and enrich the emotional experience; when used clumsily, it can annoy and even antagonize. Spradlin hits a bull’s-eye with X. The recurring images stream into a dystopian newsreel that flays you of apathy. Viciously beautiful, X pings in your conscience long after it ends. 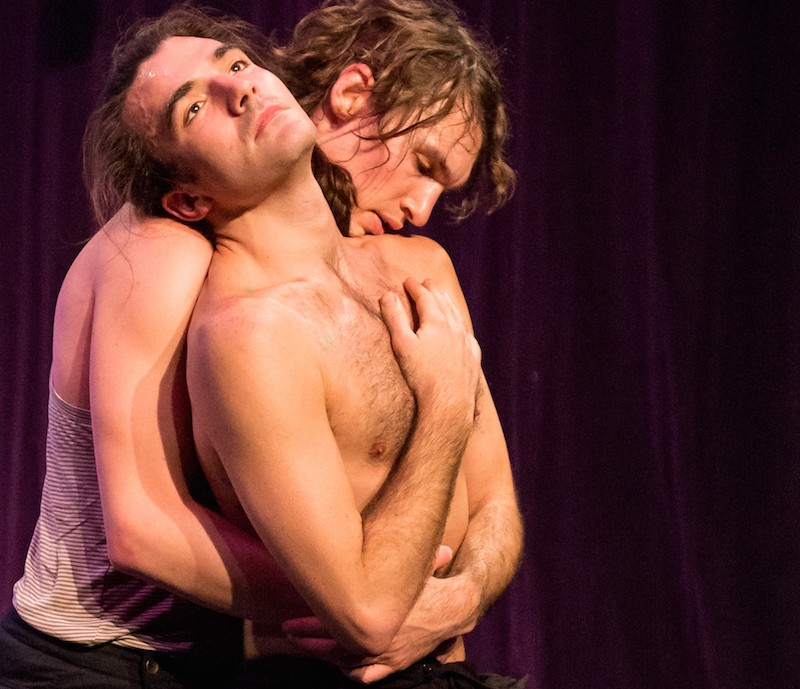 Silky. That’s the feel of Tere O’Connor’s two works, which, like a gossamer ribbon, unfurl seamlessly. O'Connor's choreography isn't meant to be analyzed so much as intuited — a slipstream of alternately quirky and elegant moments that wash through you. In Undersweet, a duet for two men, passion breaches and then succumbs to propriety. Stately walking is abandoned for swooning backbends, even a kiss, to Lully's opera Atys. If Undersweet thrives in the tension between rationality and carnality, then Transcendental Daughter resolves them with a solemn joy that hints at the wit and innocence of a girl child. A trio for two women and one man, the pace is brisk, but the dynamic is gentle. Spines waver like dandelions in a breeze, and bodies rock side-to-side, self-soothing. The three extend into arabesques, arms wide open, an invitation, perhaps, to join them in this wholesome, hopeful world.

O'Connor wields a tender, curious hand, which resonates through the lovely, but too long works: Transcendental Daughter by a little and Undersweet by a lot. Vigilance slides to torpor, and then ennui take holds.

Fresh. That’s how Loni Landon’s works smell. With her finger on the pulse of American youth, she revels in an aesthetic completely of the 21st century. She constructs ooey-gooey phrases that indulge the body’s impulse to wind and unwind: scoots across the floor to a spin on a knee that melts into a floor roll. In a word, it’s luscious. While she shows two pieces, Rebuilding Sandcastles for five and Fast Love for eight (to Jerome Begin’s noisy, jittery score played live), the evening unspools as one reflection on loss and alienation. A dancer touches another, a pat on the head or a stroke of the cheek, but the recipient swerves away. Embraces are offered, only to be evaded. At the end of Fast Love, two men reach out to hug as the lights fade to black. Do they connect? It’s uncertain.

Landon’s dancers are impossibly young, some with the awkward flush of youth still on them. But these kids can dance. Gorgeously. A generation that’s inherited a broken world, they gaze at us and at themselves, faces naked with vulnerability, shoulders hunched with resignation. The arcs and curls of Landon’s choreography suggest self-protection, the millennials’ need to skid through space and time with no sharp angles that might hook them or hold them in place. This is their birthright, and it is heartbreaking.

Two thumbs up. That’s the response to NY Quadrille. One of the chief delights is the macro-piece that runs through the two weeks — the gradual evolution of movement from hard to soft, from points and lines to endless spirals. Witnessed from the variety of perspectives afforded, the human body showcases its marvelous flexibility, its enormous versatility. Just like The Joyce Theater.