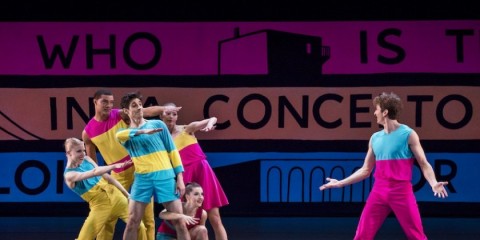 Staging and Direction for Something to Dance About: Warren Carlyle

It’s impossible to imagine the stages of the 20th century without Jerome Robbins’ contributions. How impoverished they would be without Fancy Free (1944), his jaunty smash about three sailors on shore leave, and Dances at a Gathering (1969), a meditation on transience set to Chopin.

Born in 1918, the year World War I ended, Robbins had his finger on America’s pulse until his death in 1998. He captured the zeitgeist of our time and embedded it in dances that transcend time.

July 29 marks the centennial of his birth, and New York City Ballet, his choreographic home for decades, has put together an early birthday present with Robbins 100, running from May 3-20th. Like bouquets of May flowers, this multi-bill, multi-program event flaunts the range and color of his dance making.

Tiler Peck and Taylor Stanley in Warren Carlyle’s Something to Dance About; Photo: Paul Kolnik

NYCB also dedicated its spring gala to Robbins. In addition to three of his works, the troupe presented two premieres: one by Resident Choreographer Justin Peck and the other a medley of Robbins’ Broadway numbers, with direction and staging by Warren Carlyle. The latter probably had the hardest job, sampling and then weaving together the greatest hits into coherency.

The show offstage proved to be as impressive as the one onstage. Beribboned and bedazzled patrons thronged the step-and-repeat outside while, inside, it looked like a modern-day Versailles as everyone sipped champagne and air-kissed cheeks. The mood was festive, expectant. If a waltz had sounded, it felt like everyone would begin to box step.

The dancing, however, took place on stage, and it was exactly what you’d expect from NYCB: crisp, clean, and a touch sassy. Although longtime artistic director Peter Martins resigned in January, the interim team of Peck, Jonathan Stafford, Craig Hall, and Rebecca Krohn appears to be managing nicely.

Ashley Bouder and Andrew Veyette in Warren Carlyle’s Something to Dance About; Photo: Paul Kolnik

During the opening remarks by veteran principal Maria Kowroski, she mentioned that she’s the last current member to have worked with Robbins. While this may seem worrisome since dance, often, is passed down person-to-person, Robbins’ works — his ethos really — can be revisited and reanimated with reverence and ease.

For dancers, “the steps” is shorthand to describe everything from syllabus figures to long phrases of choreography. This lingo hearkens back to the infancy of dance as a formalized art. At the court of Louis XIV, dancing started as, but then grew beyond, fancy walking. While ballet and ballroom, the two major branches that originated at Versailles, continue to evolve, both still involve rhythmical shifts of weight.

Robbins’ brilliance lays in this — the steps. Whether it’s casual strolling or jazzy joshing around, this moving from foot to foot is evident, honored. During the grandiosely balletic The Four Seasons (1979), the physical pulse married to Verdi’s paint-by-the-numbers score allows the steps to become evocative motifs: icicle-like échappés and emboîtés in Winter, languid balancés in Spring, subtle rocks in 4th position in Summer, and flickering entrechat sixes in Fall.

Stepping in time may sound simplistic, but a beat is a sonic canvas that can be splashed with movement in different places, with varied textures. Occurring over just a handful of bars in “Dance at the Gym” (West Side Story, 1957), which appears as part of Carlyle’s Something to Dance About, the accent moves from the middle of the beat, to the top, and then fades at the end. In the tribute video shown before the program, Robbins said he listened nonstop to the music to which he would choreograph. “I don’t want to miss any nuance.”

Perhaps the most universal of Robbins’ qualities is his wit. In A Suite of Dances (1994), set to selections from Bach’s “Six Suites for Solo Cello,” post-modern gravity turns cheeky. Joaquin De Luz feigns annoyance as cellist Ann Kim carries on playing although he’s ready to be done. When the ending is imminent, he turns a cartwheel and lands sitting, staring at Kim, who lowers her bow.

Robbins’ legacy all comes together, sort of, in Peck’s Easy, a droll but under-developed throwaway piece. Against a backdrop emblazoned with the block-lettered query “who is the boss in a concerto: the soloist or the conductor,” three men and three women cavort to Leonard Bernstein’s “Prelude, Fugue and Riffs.” The sneaker-clad crew projects insouciance as they skip, skitter, and power walk.

Their changes of direction are lickety-split. They venture beyond their kinespheres in flat-footed pirouettes and punchy arms only to yank their limbs under themselves again. Their manic, fluttering energy matches the soloist in the orchestra pit, Steven Hartman on clarinet. He, in turn, is barely contained by conductor Andrew Litton.

The point of any gala is to raise money, and the moneymaker here, in all likelihood, wasn’t the glorious performances by Sara Mearns and Tiler Peck nor was it the well-architected program that swung from giddiness to nostalgia. It was Robbins’ Circus Polka, adorably danced by students from the School of American Ballet. With walks, curtsies, and emboîtés (Robbins loved himself an emboîté), three groups of girls with bobbing hair bows show how it all started — and why it will keep on — by stepping in time to music.

Check back for more coverage of Robbins 100. The Dance Enthusiast would also love to hear your thoughts in an audience review.